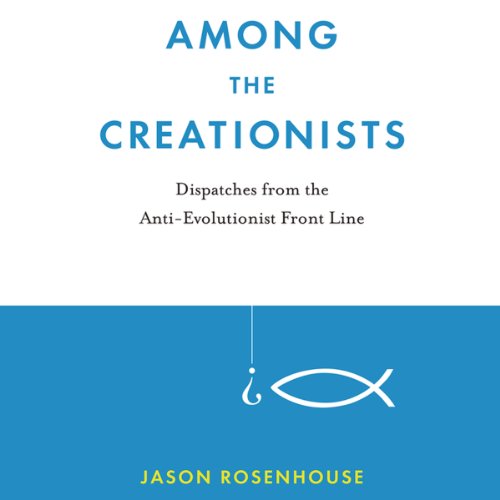 By: Jason Rosenhouse
Narrated by: George Orlando
Try for £0.00

Why do so many Americans reject the modern theory of evolution? Why does creationism, thoroughly refuted by scientists, retain such popularity among the public? Is the perceived conflict between evolution and Christianity genuine, or is it merely an illusion peculiar to Protestant fundamentalism?

Seeking answers to these questions, mathematician Jason Rosenhouse became a regular attendee at creationist conferences and other gatherings. After ten years of attending events like the giant Creation Mega-Conference in Lynchburg, Virginia, and visiting sites like the Creation Museum in Petersburg, Kentucky, and after hundreds of surprisingly friendly conversations with creationists of varying stripes, he has emerged with a story to tell, a story that goes well beyond the usual stereotypes of Bible-thumping fanatics railing against coldly rational scientists.

Through anecdotes, personal reflections, and scientific and philosophical discussion, Rosenhouse presents a more down-to-earth picture of modern creationism and the people who espouse it. He is neither polemical nor insulting, but he does not pull punches when he spots an error in the logical or scientific reasoning of creationists, especially when they wander into his own field, mathematics. Along the way, he also tells the story of his own nonbeliever's attempt to understand a major aspect of American religion. Forced to wrestle with his views about God and evolution, Rosenhouse found himself drawn into a new world of ideas previously unknown to him, arriving at a sharper understanding of the reality of science-versus-religion disputes, and how these debates look to those beyond the ivory tower.

A personal memoir of one scientist's attempt to come to grips with this controversy - by immersing himself in the culture of the anti-evolutionists - Among the Creationists is a fair, fresh, and insightful account of the modern American debate over Darwinism.

What listeners say about Among the Creationists

Interesting but a bit biased

This is the story of Rosenhouse's exploration of Creationism. Rosenhouse is an intelligent, rational mathematician and declared atheist (though the way he describes his beliefs I'd put him in the agnostic category myself). He decided in college to explore the seemingly irrational views of ultra-conservative Christians to try to understand how they can possibly deny evolution. This book describes his journey through conferences, museums, and personal conversations. It also has a light smattering of history of the creationist-evolutionist debate.


This was a surprisingly considerate and fair book considering the fact that it was coming from an atheist talking about Creationists. From the beginning, Rosenhouse insisted that although he was well-known as "that atheist guy who goes to Creationist conferences," he was almost always treated with respect and kindness. This is possibly because his main goal was to educate himself rather than to change anyone's mind. He did, of course, make public comments/questions to the speakers at the conferences, but they always were polite and seemed to be answered politely as well.

Despite this even-handedness, there were a few times that I cringed while reading this book. For instance, he lumped Intelligent Design, Theistic Evolution, Christian Science and and other lesser known ideologies all in with Creationism. He even said that they were pretty much the same thing. They're really not, though. Denying the possibility of evolution is not the same as saying that God directed evolution. Yes, I can see where an atheist might think the second option wasn't sensible either. But the basic difference remains - one set denies evolution altogether the other does not. To me, and I would imagine to many atheists as well, an all-out denial of the evidence for evolution is less sensible than saying God directed the evolution. Another lapse in his even-handedness was when he criticized the Creationists as being name-callers - as if that doesn't go both ways. Trust me, I've been disappointed in interviews and essays by prominent evolutionary theorists like Stephen Jay Gould and Richard Dawkins. Scientists can disparage and name-call too.

From what I could tell of his book, the conferences were all about getting together with people who totally agree with you to say "Here's what we agree on, now how can we get others to see the light?" Then they'd have the requisite book signings and other gatherings. So Rosenhouse had plenty of time to hobnob. In his book, he related several interesting conversations between himself and Creationist individuals. Most of these conversations seemed to include teenagers. He'd give information about which authors to read if they wanted to learn more about evolution, or just have an interesting discussion about the points of each argument. I imagine he had a lot of conversations with teenagers because they're less jaded about trying to convince people of their points of view.

This was an interesting book, and I'm glad I read it. It had some shortcomings (noted above), but listening to this book actually educated me on certain things. For instance, years ago I was turned off by Richard Dawkins when I heard an NPR interview in which he disregarded a question from a Creationist. This question could have been easily answered: it was the old "how could evolution be scientifically possible when entropy (chaos) is always increasing?" (This is the second law of thermodynamics.)

The answer is: entropy always increases in a "closed system." A closed system is one that doesn't have any exchange of energy with the outside. Like the entire universe. There's only one universe. There's nothing that it can exchange energy with. On the other hand, Earth is not a closed system. It's always losing atmosphere to the space surrounding it. It's always getting light and heat from the sun. That's called an open system. Animals are open systems too. We breathe, we eat, we poop. That's energy exchange. Evolution took place in an open system, therefore the second law of thermodynamics doesn't apply and there is no contradiction.

Ok, maybe that wasn't easy to explain...Point is, Dawkins could have answered the question politely instead of rudely disregarding it. Although I still think Dawkins was in the wrong, after reading this book I now understand how frustrating it might be to be constantly answering exactly the same question over and over and people ignoring my answer.

A rational man dives deep into religious fanaticism. But it really helps you understand how people can believe such weird things. #lookattheotherside. #compassion. #tagsgiving. #sweepstakes.