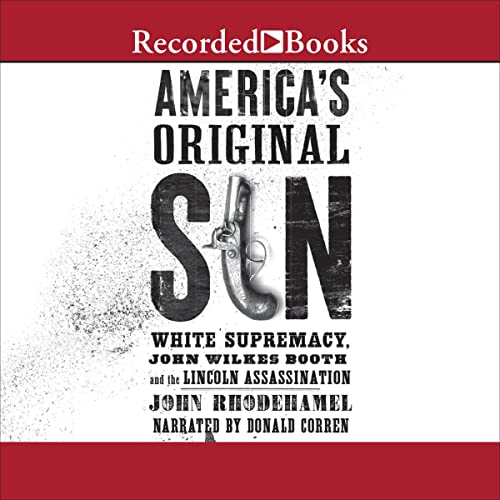 By: John Rhodehamel
Narrated by: Donald Corren
Try for £0.00

On April 14, 1865, after nearly a year of conspiring, John Wilkes Booth shot Abraham Lincoln as the president watched a production of Our American Cousin at Ford’s Theatre. Lincoln died the next morning. Twelve days later, Booth himself was fatally shot by a Union soldier after an extensive manhunt. The basic outline of this story is well known even to schoolchildren; what has been obscured is Booth’s motivation for the act, which remains widely misunderstood nearly 160 years after the shot from his pocket pistol echoed through the crowded theater.

In this riveting new book, John Rhodehamel argues that Booth’s primary motivation for his heinous crime was a growing commitment to white supremacy. In alternating chapters, America’s Original Sin shows how, as Lincoln’s commitment to emancipation grew, so too did Booth’s rage and hatred for Lincoln, whom he referred to as “King Abraham Africanus the First.” Examining Booth’s early life in Maryland, Rhodehamel traces the evolution of his racial hatred from his youthful embrace of white supremacy to his final act of murder. Along the way, Rhodehamel considers and discards other potential motivations for Booth’s act, such as mental illness or persistent drunkenness, which are all, he writes, either insufficient to explain Booth’s actions or were excuses made after the fact by those who sympathized with him. Focusing on how white supremacy brought about the Civil War and, later, betrayed the conflict’s emancipationist legacy, Rhodehamel’s masterful narrative makes this old story seem new again.

The first book to explicitly name white supremacy as the motivation for Lincoln’s assassination, America’s Original Sin is an important and eloquent look at one of the most notorious episodes in American history.