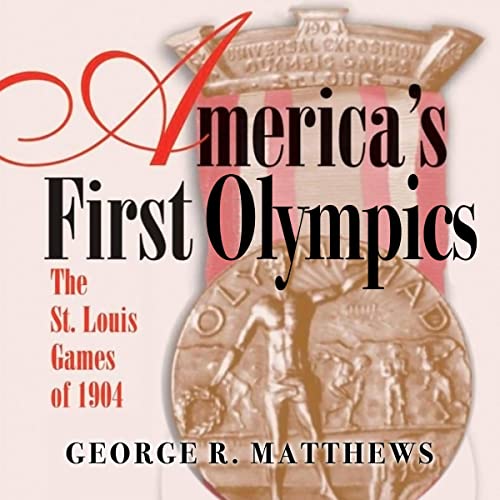 By: George R. Matthews
Narrated by: Josh Brogadir
Try for £0.00

America in 1904 was a nation bristling with energy and confidence. Inspired by Theodore Roosevelt, the nation’s young, spirited, and athletic president, a sports mania rampaged across the country. Eager to celebrate its history, and to display its athletic potential, the United States hosted the world at the 1904 Louisiana Purchase Exposition in St. Louis. One part of the World’s Fair was the nation’s first Olympic games.

Although the games were originally awarded to Chicago, St. Louis wrestled them from her rival city, against the wishes of International Olympic Committee President, Pierre de Coubertin. Athletes came from 11 countries, and four continents, to compete in state-of-the-art facilities, which included a 10,000-seat stadium, with gymnasium equipment donated by sporting goods magnate Albert Spalding.

The 1904 St. Louis Olympics garnered only praise - and all agreed that the games were a success, improving both the profile of the Olympic movement, and the prestige of the United States. But, within a few years, the games of 1904 receded in memory. They suffered a worse fate with the publication of Coubertin’s memoirs in 1931. His selective recollections, exaggerated claims, and false statements turned the forgotten Olympics into the failed Olympics.

This original account will be welcomed by history, and sports enthusiasts who are interested in a new perspective on this misunderstood event.

What listeners say about America's First Olympics: The St. Louis Games of 1904