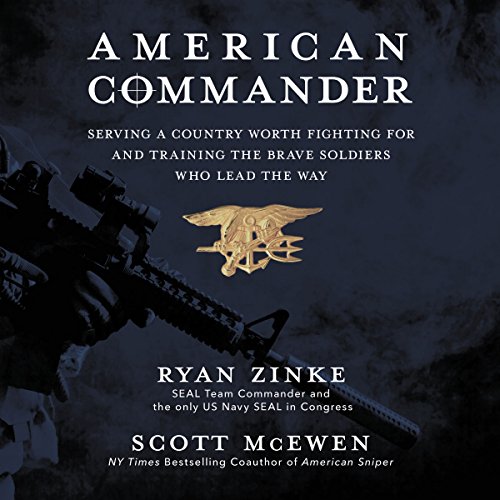 By: Ryan Zinke
Narrated by: Daniel Butler
Try for £0.00

In recent years the world has learned just what is required to bravely serve America through SEAL Team Six. Now, for the first time, we hear from their commander.

As a 23-year veteran of the United States Navy SEAL Teams, Ryan Zinke received two Bronze Stars for battle valor and eventually rose to command the elite members of SEAL Team Six. During his career Zinke trained and commanded many of the men who would one day run the covert operations to hunt down Osama bin Laden and save Captain Phillips (Maersk Alabama). He also served as mentor to now famous SEALs Marcus Luttrell (Lone Survivor) and Chris Kyle (American Sniper).

When Zinke signs with the US Navy, he turns his sights on joining the ranks of the most elite fighting force, the SEALs. He eventually reaches the top of the SEAL Teams as an assault team commander at SEAL Team Six. Zinke shares what it takes to train and motivate the most celebrated group of warriors on earth and then send them into harm's way. Through it, he shares his proven problem-solving approach: situation, mission, execution, command and control, logistics.

American Commander also covers Zinke's experience in running for Montana's sole seat in the United States Congress. Zinke's passion for his country shines as he conveys his vision to revitalize American exceptionalism.

Scott McEwen and Ryan Zinke take listeners behind the scenes and into the heart of America's most-feared fighting force. American Commander will inspire a new generation of leaders charged with restoring a bright future for our children's children.

What listeners say about American Commander

A real deep analysis of the context and courage

Of Navy Seals Slightly
loud and bombastic different from the great British SAS!! But interesting.

I thought this would be a memoir about operational missions and insight into SEAL indoctrination program and training. Instead it was a self intellectual jerk off on the authors personal politics. Really too bad.

Way to much political garbage

I was expecting a Navy seal book not someone talking politics for several hours...:(
One of the worst military books I have ever read.

kept listening because I looked forward to at least some part of the book to be good...not the case.

Fascinating, but with too many political rants.

Loved the SEAL anecdotes, but not the many partisan political rants. Used fast forward several times.

An advert for fracking posing as a book on service

What would have made American Commander better?

I purchased this book seeking a story about service, rising through the ranks, and the value of each experience that made up this man's career. Instead of that it was a thinly veiled job application for the cabinet position Secretary Zinke now hold in the Dept. of the Interior as well as a full blow advertisement for extractive industries and oil.

This book makes me question the image of hunter conservationist Sec. Zinke has portrayed himself as, and has me wary of the motivations driving his policy decisions. I feel Sec. Zinke is a Roosevelt Republican more in speech than deed as a result of the content contained in this book.

What character would you cut from American Commander?

I would recommend this novel to anyone attempting to gain a more Libertarian view of the world and what we must add to it.

A reviewer on Amazon wrote that the book details Ryan's specific decision-making / problem-solving approach. I heard it mentioned shortly in the book, but there wasn't much of an explanation of it, let alone apply it.

Apart from that, the book was enjoyable. I personally agree with at least 95% of what Ryan stands for, so the political content didn't rub me the wrong way at all.

There was less political content than I expected from the book's description. Most of it is a memoir of his life, and the SEAL stories are told in that manner – i.e. as recollections from the past – anecdotes if you will. That means there's little action to be found here. It's not Extreme Ownership by Jocko & Babin by any stretch of the imagination.

It reminds me of Seal Team Six – Memoirs of an Elite Navy SEAL Sniper, by Howard E. Wasdin. Ryan's book is okay, but not as enjoyable as Wasdin's. The latter is more emotional – made me shed a few tears. Ryan's book is more on the dry side, and I found myself wanting to skip the parts about his childhood, which all seemed quite trivial.

He also keeps his cards close to his chest – there are no secrets revealed here. At all. I know most of his missions were likely classified, but still: I wanted more than I got.

Oh, there's another (similar) book I enjoyed more than this one. It's Unbreakable, by Thom Shea. Part love story, part memoir – but also lots of battle-action and life lessons.

All that said: Ryan's book is okay, too;)

Great autobiography of Ryan Zinke who exemplifies the term Patriot.
A true lover of our Republic that was willing to give his life in defense of our Constitution as a Navy SEAL and continues to defend our Republic as a Senator and soon to be Secretary of the Interior under President elect Trump.
Commander Zinke shares his love of our nation not only for its freedom but its history and beauty as well.

A patriotic man with vision

I liked the manner in which he always strived to do the best for whatever situation in was in. His narrative of a Montanan who loved his family , especially his grandparents, loved athletics, the outdoors, and was focused on getting good grades in school and college.

He talked about swimming in Whitefish Lake in May where the water temperature was in the 40s and lower 50 degrees for his High School swimming team, to playing in his last college football game between Oregon and Oregon State, in 0-0 tie (famously known as the toilet bowl). His timing and being encouraged by a former warrior to join the Navy, go to Officer's Candidate School and become a Navy SEAL, was his destiny. Excellent storytelling. Bravo Zulu, Commander Zinke's favorite SEAL greeting, or should I say Z-man.

I'm a Veteran and am very thankful for men like this. Thank you for sharing your part of history and thank you for defending our freedom!