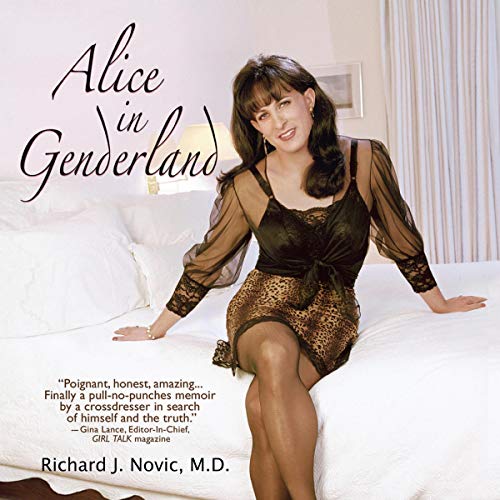 Alice in Genderland is the first ever memoir by a cross-dresser who is not content to live behind closed doors - and who takes it much further than his straighter, more circumspect peers might ever care to go. Most of the time, Harvard-educated psychiatrist Richard Novic is Rick, a man at the office or a husband and father at home. But one night a week, he is Alice, a woman about town, shopping, dining, dancing, and dating a man for nearly a decade.

In contrast to the life he leads today, Rick Novic suffered since his sporty, nerdy boyhood with a secret, a desire he was in no way equipped to handle, but one that eventually burst through his denial a few months before his wedding day. Just once, he felt, while he still could, he had to know how it felt to be a woman.

Like Alice in Wonderland, his curiosity led him to fall headlong down a rabbit hole, through desperate straits, mind-opening surprises, heart-rending changes, gritty sex, and boundless love. By the time he was back on his feet, he was a different person, living a lifestyle he hadn’t known existed. Anyone who has struggled to figure out who they are and how they want to live will surely appreciate this informative and engaging life story.

“Few know the transgender scene like Girl Talk magazine’s Alice Novic. This exciting new memoir by her male alter ego takes us along with him and the people he loves, as he encounters and explores each twist and turn around him and within him. As much Lewis and Clark as it is Lewis Carroll, Alice in Genderland blazes a new trail in the world of crossdressing.” (Linda Jensen, contributing writer, Transgender Forum)

“More provocative than soothing, Alice in Genderland is fascinating and well worth reading.” (Vern L. Bullough, PhD, author of Crossdressing, Sex, and Gender, past president of the Society of the Scientific Study of Sex)

What listeners say about Alice in Genderland

Any lace wearing man should listen to this one. Hits home on many levels conventional books don't. Even though this category is so small this book comes off extremely large.

I loved this audiobook! Alice gave such a beautiful insite into this often scary and hurtful world. Gave me more needed courage. Thank Dr. Novic

I'm a 46 year old tg/cd much like her but much more private and scared of revealing myself. I've recently been reading/listening to this audio book and I can't believe how much we share and how much I've learned from her. she's also convinced me that I'm probably way over do for some therapy.

Enlightening story for anyone who cross dresses

Very good listen I learned so much about crossdressing and the difference between the different types of cross dressers.

This book is a must read for anyone who is struggling with gender identity, knows someone who is, or just wants to gain a broader worldview when it comes to the gender identity spectrum. This book was so incredibly eye opening. I resonated so deeply with Alice's feelings and experiences. I am so deeply grateful for Alice's courage, vulnerability, and self-disclosure. In reading this book, I actually learned much more about myself.

I honestly cannot say enough wonderful things about Alice in Genderland. I have not encountered a book quite like it. This is definitely one of those stories that I will re-read intermittently. Thank you so much Alice for this story about a segment of the population that does not typically get a voice.

What a great story. As a CD your life story is 90% spot on my own life. At 46. My wife supports my dressing 100%. But does not know i experience Bi life as dressed out. This story inspires me to finally come out and tell her i want to. I believe she will be exactly your wife. As far as job is concerned i have extremely manly job and own business at home which i could never come out and continue my work. Im satisfied with that. Its only my bi experiences i want to share with the live of my life. Thank you for this sharing ! ;)