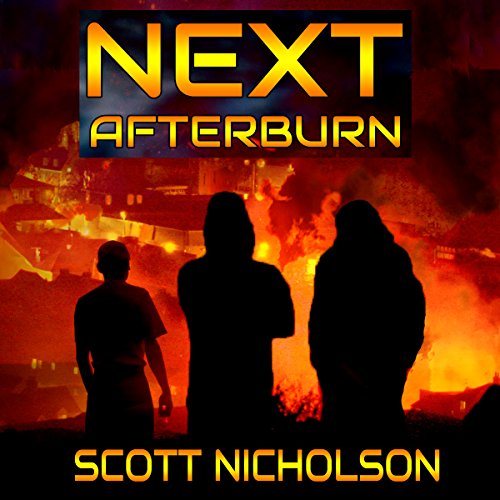 By: Scott Nicholson
Narrated by: Kevin Clay
Try for £0.00

Five years after a devastating solar storm wipes out civilization and spawns a strange race of mutants, Rachel Wheeler and her misfit family must choose whether to hide away or fight to join other survivors.

As their food supply dwindles inside their bunker, radiation from abandoned nuclear plants is altering the world around them. Not only are the mutants building their own cities and weapons, the remaining dregs of the US military are massing for an attack. In this decaying environment, hostile new creatures crawl out from the crevices and up from the waterways to threaten them all.

But as a half-mutant, Rachel's choice isn't as simple as mere survival - the mutant way of life might be more promising than anything humans could hope to restore. And Rachel's next decision could tear apart her family and the entire world.

What listeners say about Afterburn: A Post-Apocalyptic Thriller

I am so happy the author decided to expand on this series! The first series "After" was great! This picks up 5 years after the events of the first series. The zaps continue to evolve. They're getting smarter and more dangerous! I'm very happy to see the new series continue with Kevin Clay narrating. He does an excellent job!

After the world of "After"

This is a fast-paced follow-up novel that takes place after Nicholson's "After" series. He always manages to bring something new to the story to keep the reader engaged. I love the characters of Rachel and DeVontay, and I'm looking forward to seeing what becomes of the relationship between the two teens. I especially want to see more of Franklin Wheeler. He fascinates me. If you end up choosing to start this book, I would recommend the "After" series first. Though I don't think its necessary in order to enjoy this series, its just neat seeing how the world is after all that happened in the prior series. I listened to the Audible audio version of the book, and I enjoyed the narration by Kevin Clay. He has a pleasant voice and good character differentiation. Overall, if you enjoy zombie books but want a twist, give this book a try.

An interesting take-off on the zombie genre. Here we have intelligent mutants, which almost remind me of aliens of some sort. One of the main characters and a baby are half-mutants due to the fact that they were injured by an infected animal then treated by the mutants or Zapheads as they are called. I hate that term Zapheads, sounds so silly and juvenile. The major portion of this book involves understanding the Zapheads, where they came from, and why they are here or at least what they are up to. It appears the Zapheads manufacture a drone in the form of large birds which they control mentally and use as weapons against humans. There also exists mutant animal species resulting from the radioactive discharge due to the nuclear power stations melting down. So our survivors are looking for safe locations while avoiding or fighting Zapheads, drone-birds, and other mutant species. An interesting story although a bit long-winded at times. I already have the second book of the series, so we’ll see how this goes. Three.point.five for the opener.