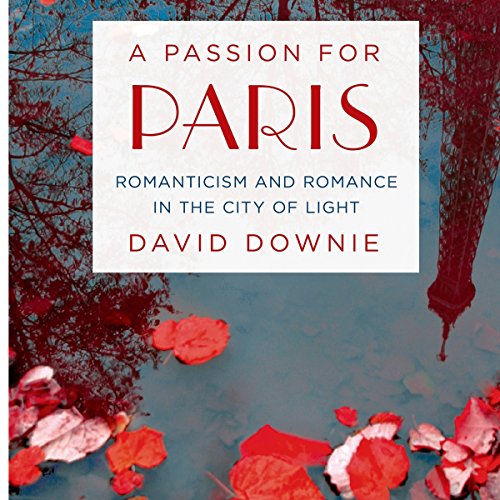 A Passion for Paris

By: David Downie
Narrated by: Jean Brassard
Try for £0.00

"A top-notch walking tour of Paris.... The author's encyclopedic knowledge of the city and its artists grants him a mystical gift of access: doors left ajar and carriage gates left open foster his search for the city's magical story. Anyone who loves Paris will adore this joyful book. Readers visiting the city are advised to take it with them to discover countless new experiences." (Kirkus Reviews [starred])

A unique combination of memoir, history, and travelogue, this is author David Downie's irreverent quest to uncover why Paris is the world's most romantic city - and has been for over 150 years.

Abounding in secluded, atmospheric parks, artists' studios, cafes, restaurants, and streets little changed since the 1800s, Paris exudes romance. The art and architecture, the cityscape, riverbanks, and the unparalleled quality of daily life are part of the equation.

But the city's allure derives equally from hidden sources: querulous inhabitants, a bizarre culture of heroic negativity, and a rich historical past supplying enigmas, pleasures, and challenges. Rarely do visitors suspect the glamor and chic and the carefree atmosphere of the City of Light grew from and still feed off the dark fountainheads of riot, rebellion, mayhem, and melancholy - and the subversive literature, art and music of the Romantic Age.

Weaving together his own with the lives and loves of Victor Hugo, Georges Sand, Charles Baudelaire, Balzac, Nadar, and other great Romantics, Downie delights in the city's secular romantic pilgrimage sites asking , Why Paris, not Venice or Rome - the tap root of "romance" - or Berlin, Vienna, and London - where the earliest Romantics built castles-in-the-air and sang odes to nightingales? Listen to A Passion for Paris: Romanticism and Romance in the City of Light and find out.

What listeners say about A Passion for Paris

A disappointment after Paris, Paris

This book was such a disappointment after reading and loving the same author's "Paris, Paris", which I gave three 5-stars. In Passion for Paris, I found I wasn't interested in his telling of the historic characters' lives and relationships. Additionally, the narrator made me a bit crazy. David Bowie is from San Francisco and the narrator in "Paris, Paris", an American with a passable French accent seemed very believable as Bowie telling of his experiences of various parts of Paris.

The "Passion" narrator Jean Brassard, of course had an excellent French accent, but I had a very hard time dealing with the fact that he was telling an American's story. Maybe I missed the point and with this narrator, was supposed to disregard the fact that this was written by an American ex-pat, but it bothered me.

Additionally, because I had so enjoyed Bowie's "Paris, Paris", I tried hard to get through this one, but just couldn't get into his subject matter and abandoned the book about half way through.