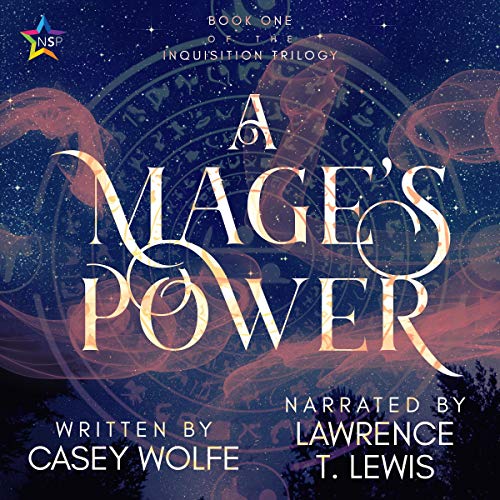 By: Casey Wolfe
Narrated by: Lawrence T. Lewis
Try for £0.00

Built on the bones of an ancient city, modern-day Everstrand is where master mage, Rowan, has set up his enchantment shop. When not hanging out with his werewolf best friend, Caleb, or studying, he dabbles in herbology and the controversial practice of blood magic. A prodigy who has already earned two masters, Rowan’s bound and determined to reach the distinction of grandmaster, a mage who obtains a masters in all five Schools of Magic.

Shaw works for the Inquisition, the organization charged with policing the magical races collectively known as magicae. Recently, it has come under scrutiny as magicae begin to disappear and reports of violence increase. With secrets of his own on the line, Shaw is willing to risk everything to find out just what is going on behind all the locked doors.

When Rowan and Shaw are entangled in each other’s worlds, it becomes evident that their hearts are as much at risk as their lives. They must find the truth and stop a conspiracy before it’s too late.

What listeners say about A Mage's Power

The narration: I have only heard one other book narrated by Lawrence T. Lewis before this. Both times I have listened to him, the main characters were late teens or early twenties, and he seems to have the perfect voice for that generation. His voice is clear and youthful, and I thought he did well at emoting and bringing the story to life. I would definitely listen to him again.

The story: This story falls somewhere between paranormal and fantasy. The setting of Everstrand doesn’t seem to be of this world, but their normal mundane people are called human. They seem to live in relative peace with mages, witches (not the same as a mage), vampires, werewolves, and other shapeshifters. What is great about paranormal and fantasy books, is that the writer can create a world all their own, and it’s rules don’t have to necessarily follow those of the real world. I love the magical characters that the author wrote about and created in this story, but the world itself did feel a little confusing to me. They have cell phones and other technology like we have,and they use the same terminology as we do for said technology and call their inhabitants human. Yet, I have this feeling that Everstrand is a far off place in another universe. So even knowing that the author has free reign over the creation of this world, I couldn’t get a real grasp on where and what this place was.

As far as the story goes, I thought it was really interesting. There is a bit of romance going on. Rowan is a mage, who seems to have great power, unlike most mages his age (or any age for that matter). Shaw is an inquisitor, which seems to be a branch of law enforcement, for magical creatures, mostly. They do have a bit of insta-love, but in a world of magic, I feel like most anything is possible when it comes to love. Love almost seems like a type of magic in my opinion. But there is more. Shaw’s job doesn’t seem to be quite what he says it is, and Rowan can tell there are things Shaw isn’t sharing. Other magical people/creatures are disappearing, and there could be a political cover-up going on in the background. Though Shaw’s feelings for Rowan are true, gaining Rowan’s help to find out what is happening does seem to be an unexpected benefit to their relationship.

I don’t want to give away the ending but I do want to say that I really enjoyed the characters in this story. Rowan’s advanced abilities and his strength is really cool. I wonder how much that will play into the rest of the series. Shaw has some low level abilities, and his strengths aren’t physical or metaphysical but it’s his desire to help others that makes him a great character. Rowan’s best friend, Caleb is a werewolf shifter and he’s kind of this party animal (forgive the pun) and I think seeing him settle down and meet someone will balance things now that his best friend has a partner. Shaw’s group of friends are like him. I want to call them military special ops, though I’m not sure that’s completely accurate. I just know they are pulling strings and making things happen in the background. I would love to know more about them, especially Marcus, the vampire they rescued in this book.

While I didn’t feel like I had a good grasp of the world that was built in this book, I did enjoy the characters and the story line. I would recommend listening to or reading this book and I know I will be checking out the future books in this series.

The importance of Good Narration

I liked the story, characters and premise. I feel like this is a world and storyline I could really get wrapped up in. But the one thing that changed all that was the narration. My best descriptive is mono-toned. Whether scene or character it all bled together in “blah”. It honestly made it hard in a way to follow the story. The feeling of listening is akin to hearing one long, dry and never ending run on sentence. Details being lost to droning. The narrator tried I think to add character to each character but failed miserably. I do hope the Author uses someone else next story as if this is their go to, I’m dropping the series.

I liked the idea of this universe. It had good well built characters, information about the realm, and detailed information provided about the magical world they in.

I am looking coward to book 2!