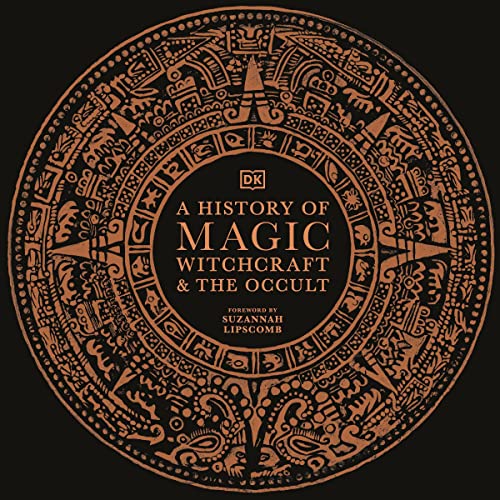 A History of Magic, Witchcraft and the Occult

Discover the beguiling history of witchcraft, magic and superstition through the centuries and across the world in this stunningly audiobook.

A History of Magic, Witchcraft and the Occult charts the extraordinary narrative of one of the most interesting and often controversial subjects in the world - from ancient animal worship and shamanism, through alchemy and divination to modern Wicca and the resurgence of the occult in 21st-century literature, cinema and television.

Providing listeners with a comprehensive, balanced and unbiased account of everything from Japanese folklore and Indian witchcraft to the differences between black and white magic and dispelling myths such as those surrounding the voodoo doll and Ouija, this audiobook explores the common human fear of and fascination with spells, superstition and the supernatural.

The perfect introduction to magic and the occult, it explores forms of divination from astrology and palmistry to the Tarot and runestones, mystical plants and potions such as mandrake, the presence of witchcraft in literature from Shakespeare's Macbeth to the Harry Potter series and the ways in which magic has interacted with religion.

The most comprehensive history of witchcraft available, A History of Magic, Witchcraft and the Occult will enthral and fascinate you with its lavish, accessible entries, whether you are a believer or sceptic.

What listeners say about A History of Magic, Witchcraft and the Occult

A stunning overview of the history of witchcraft. From hoodoo to Christianity and every practice known to mankind, this book has it all. Thoroughly inspiring. The author (british) has fantastic pronunciation throughout, making it an easy listen. Not at all robotic or monotonous like some audio books. I highly recommend this to anyone that wishes to learn about witch and magical history.
I will definitely be listening to this again.

This is a series of lemmas rather than a story. There is lots of repetition. Too many headings break the flow. This works fine in print as a reference book, but not as an audio book.

Very thorough and clear narration. I brought the hard copy too as it really caught my attention in the shop. Very interesting to learn about the history of witchcraft, incredibly well put together! Thank you to the author and to everyone who was involved! Very fascinating to have an insight into how the portrayal of bad Witchery came about, old laws and practises. My favourite parts were the chapters on fairy tales, astrology, tarot, crystals, healing plants and mind body spirit! Would reccomend if you’re interested in understanding the progression of witchcraft and especially the progression feom 20th century onwards - my favourite part!

Great until the end

The narrator is overall very engaging, though some of her pronunciations are a miss. Otherwise, the history is well researched and clearly presented in what is a short book covering an immensely varied topic of history and sociology.

my main issue is that in the modern section, the author makes the dishearteningly common mistake of thinking all modern magic practices are wiccan when that is simply not true. There is also a clear misunderstanding of what paganism is uniting them under a banner as if they are homogeneous beliefs when they are a loose collection of independent religions and only wiccans follow the wheel of the year, pagans follow the holy calendars of their specific faith.

A good reference book until the chapters starting with Wicca in the final hour-and-a-half.

This sounds comprehensive, but it’s so lacking in insight and style that it’s hard to experience it as anything other than a list of facts that are poorly attributed. Like listening to a Wikipedia article.

A brilliant little mass of information.

It comes hard and fast, with bitesize facts, points, names and dates, perhaps too hard and fast in fact, as more binding language and a slower pace may favour learning. One could just listen twice though. I doubt a better book on the subject matter could exist in the time achieved - a fascinating and impressively comprehensive worldwind of a global history.

I love DK books and read them a lot with my children. Listening to one is challenging however as the reader reads all the captions and (necessarily) jumps from text box to text box. Difficult to follow.

Deep as a puddle

The problem with going from Mesopotamia to the current day in eight hours is that no topic gets anything like the time it deserves. Alistair Crowley? Covered in less than three minutes.

No sources, no interviews, no original research, this is like an extremely long, C grade high school report.

I've realised now where all the references from Harry Potter come from. it's interesting to see how Misticism has evolved through time

An interesting historical reference of witchcraft. The book seems to jump around between topics, with disjointed flow and some repitition. I think it’s the kind of book that you might like to dip in and out of, using the index to look up specific issues. It took me several weeks to get through, although it’s an area that I would otherwise find interesting. It appears that the author has no belief in either magic or religion so I’m surprised that she would choose to write about these subjects.