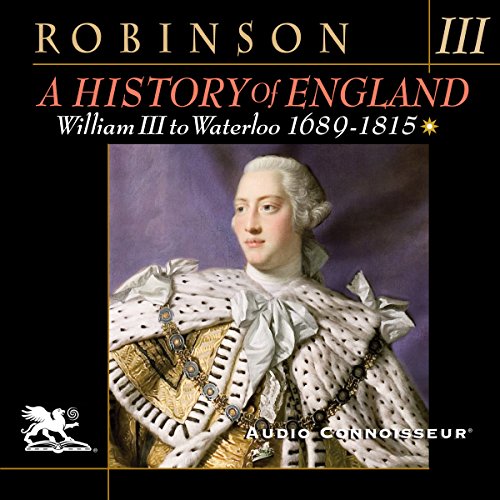 By: Cyril Robinson
Narrated by: Charlton Griffin
Try for £0.00

In volume three of Cyril Robinson's famous history of England, we now enter a crucial phase in which political and economic power both change hands. Parliament now dominates the nation's political discourse, and, led by its brilliant Whig leader, Robert Walpole, this party maintains itself in power for a century. It is a stagnant century of corrupt politics and even more corrupt government magistrates and bureaucrats. But it is also the century that will usher in the greatest change humankind has ever seen.

The Industrial Revolution completely alters every aspect of society. And, meanwhile, war is the motive power behind everything, as England pits itself against the mightiest and most feared power in Europe, the France of the Bourbons and, later, Napoleon. In a tumultuous 125-year period, the English fight and win three out of four great wars, losing their American colonies but gaining a worldwide trading empire. Follow along in this exciting third volume of a four-part series as England's greatest heroes confront and bring down the greatest military genius of the era, Napoleon Bonaparte. Often going it alone, Britannia places her fate in the hands of two men...Nelson and Wellington.

What listeners say about A History of England, Volume 3: William III to Waterloo: 1689-1815

Actually enjoyed it and the narrator with one huge caveat. Whilst the narrator was clear and inflective, holding your attention, why on earth did he have to speak in the exaggerated almost pompous Churchilian manner with such strange pronunciations. Often I had to try to work out where he meant when saying place names since his pronunciation bore little resemblance to modern English.

This is an author who can move a story along, no doubt, while imparting a good basic sense of the history referred to. This is not modern super-disciplined and balanced academic history. The author will not hesitate to call an individual a "weakling," "idiot," "corrupt," or he like, and sometimes these barbed critiques extend to a whole nationality. So it is stereotype-heavy, in a way that falls strangely on modern ears (civilized ears anyway). I believe it was written in the 1920s or thereabouts, and may well reflect the grandiosity (albeit faded) and nationalistic team spirit of Victorian Britons. There are, however, criticisms at turns of various Britons as well. It stands as a favorite narrative of the times from a British perspective for me, in the sense that it really picks up and moves and conveys a story. I prefer it to Churchill's telling of the same stories. From there, the curious may seek more disciplined recountings of the events from various perspectives. The narrator too is quite punchy and verges on grandiose, but I like his stridency, and it fits this story like a glove. It does not go deep into details of commerce, but has plenty of politics, personalities, and of course, wars.

Such pompus bias throughout.

Though the sequence of events are no dount accurate enough, the tone is so very bias that is makes my simple quest for straight historic events very difficult.
This degree of remorseless nationalism should be branded with a warning of its undeniable fictitious premise. Young minds read and study history to investigate and analyse the events to brough about the world that we live in today. This endeavour is futher meant to help better understand the errors of our past and be better armed to face the challenges ahead. if English writers (quite like American writers on the subject of their own history) keep writing about events of history with such vehement proverbial chips on they shoulders, we're bound to keep making the same mistakes all while erroneously feeling we're standing on a standpoint of authority and righteousness but actually continuously ruining the cultures, lives and other socioeconomic aspect of our societies.

historic writers aught to be neutral on the subjects they write about. Stop the incessant propaganda of culturaly inherited ideals. be a medium of information not indoctrination!

This is a fun read but largely outdated. Several of the authors points have been disproved by more recent scholarship. He is also an apologist for the British in terms of their history in Ireland and India. All that being said it's a good book for beginners who should then read a more up to date work on the same period and look for comparisons.