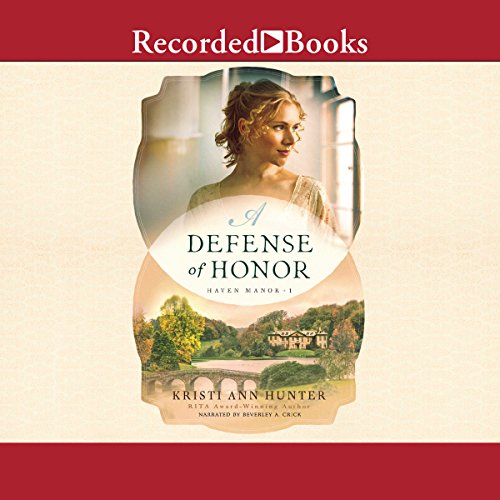 A Defense of Honor

By: Kristi Ann Hunter
Narrated by: Beverley A. Crick
Try for £0.00

Forced to run for her life, Kit FitzGilbert finds herself in the very place she swore never to return to - a London ballroom. There she encounters Graham, Lord Wharton, who believes Kit holds the key to a mystery he's trying to solve. As much as she wishes that she could tell him everything, she can't reveal the truth without endangering those she loves.

When Katherine "Kit" FitzGilbert turned her back on London society more than a decade ago, she determined never to set foot in a ballroom again. But when business takes her to London and she's forced to run for her life, she stumbles upon not only a glamorous ballroom but also Graham, Lord Wharton. What should have been a chance encounter becomes much more as Graham embarks on a search for his friend's missing sister and is convinced Kit knows more about the girl than she's telling.

After meeting Graham, Kit finds herself wishing things could have been different for the first time in her life, but what she wants can't matter. Long ago, she dedicated herself to helping women escape the same scorn that drove her from London and raising the innocent children caught in the crossfire. And as much as she desperately wishes to tell Graham everything, revealing the truth isn't worth putting him and everyone she loves in danger.

What listeners say about A Defense of Honor

Evangelical books should be listed as such. As an atheist, I am irritated by books that promote religion. The narrator did a good job.

Bravo! More Please!
A spin on what's next with Aaron? with Daphne? Aaron & Daphne???🤗 with Ben? with Jess? or the wonderful quirky Priscilla?
Sooo great, fun, touching, redemptive...BRAVO!!

This is for you if you believe God has individual plan for you and all you do is have faith and trust him, then you'll soon have a rich husband who will give you fabulous jewelry.

The narrator did a great job and really enjoyed the way she brought each character to life. The story was interesting and I found myself hating when it was over. Enjoyed the humor and characters in this book.

One of the Best

In Defense of Honor Kristi Ann Hunter creates such an excellent crime that the reader forgets it is still a crime. Reparations must be made. Redemption is needed. Plots like this one make Hunter one of the best Christian Romance authors of our times. Her books entertain, inform and inspire. Her characters delight and find a place in you heart.

This story is unlike any other Regency era story I've read and I loved it!
Aristocratic life isn't all about 'the season' with its pretty dresses and fancy balls. Sometimes things happen and unexpected children are the result, forever ruining the mother's life but having little consequence for the father. Kit is a rescuer of these women and the unwanted offspring. The women get a second chance and the children are not condemned to orphanages or the workhouse.
Her method of providing support for the children is unorthodox but she doesn't see another option. I loved her determination to do what she thought was best. It took a good bit of bravery, even if she wasn't always feeling brave on the inside. Without giving spoilers, I can say that things are going fairly well until she meets Graham, Lord Wharton, she leaves to go back to her life but then he finds her.
"...Haven Manor wasn't just a refuge it was a family..." This line from the book tells what it is truly about. Family. Kit, Daphne, Jess, the children, Graham, and the families they create.
What happens when Graham finds her and Haven Manor? You must read that for yourself,
Parts of this story are very moving. Some parts are quite funny. The children will steal your heart.
I highly recommend this book! I first got the audible edition and loved it! The narrator is fantastic.
When I saw the Kindle version on sale, I had to have it too.

I loved the storyline as it brought incite into the real lives and issues of the debutante.

Interesting story, tedious execution. Maybe too much unnecessary detail and too many internal thoughts. I've enjoyed this author's other stories, but this one takes a while to get into. It started interesting enough, but later, dull interactions mixed with so much mental pondering really slows it down.

The story took twists that I didn't expect. I read a lot so I can usually figure the story out long before the end. I was pleasantly surprised with this one.

This novel wasn’t particularly good, but it engaged me enough to listen through until the preachiness and Christian claptrap nauseated me. I don’t mind a bit of historically accurate Christian sentiment and observance, but the excruciating and excessive sermonising takes over the plot and the characters until is is completely unrelatable to any but the most rabidly religious. This should be listed as Christian evangelist literature, not historical romance.

A Truly Creative Story With Twists and Turns

Kristii Ann Hunter is an amazingly creative writer who obviously researches thoroughly the period in which her stories are set.