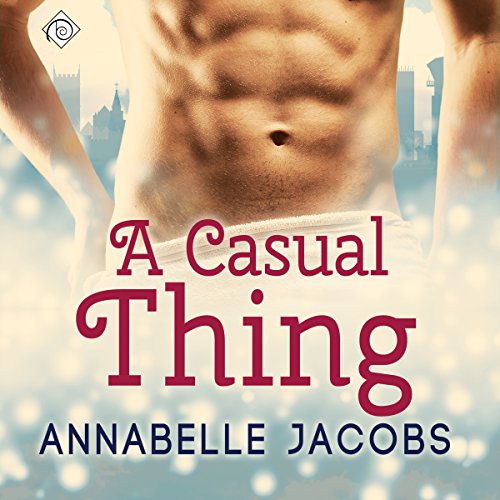 By: Annabelle Jacobs
Narrated by: Matthew Lloyd Davies
Try for £0.00

Patrick Mason travels to Bristol to spend the summer with his brother, Ben. He's cat sitting for the first two weeks while Ben goes on holiday. But Ben neglected to tell him he wouldn't be doing it alone. Will Adams - Ben's mate and Patrick's long-time crush - is staying in Ben's guest room while he waits to move into his new house after a breakup.

Against his better judgment, Patrick convinces Will that a little no-strings fun is just what they need. Patrick doesn't want to get involved with a guy on the rebound, and Will isn't interested in starting something serious with a student. But Patrick's never been good at separating sex from feelings, and this time is no exception. As their weeks together draw to a close, they need to decide if they have something worth pursuing or if it's really just a casual thing.

What listeners say about A Casual Thing

This almost 5 hour audio book is light and fun.

Patrick, a college kid is spending the summer with a favorite brother Ben, the first couple of week the brother is on vacation so Patrick assumes he’s alone with the brothers cat. Once he gets to the brothers home he realizes that the brother has set him up, and the brothers BBF is also staying for the summer. This is the same guy that Patrick has had a crush on for most of his young adult life.

Will is a few years older than Patrick, just broke up with his boyfriend and is living with his BBF until his new place is ready. He’s always knew Patrick had a crush on him but they never acted for several reasons. One of which Patrick is the kid brother of his best friend.

Patrick and Will embark on a holiday fling while Ben, is away. little by little what starts a summer fling wants to turn into more but neither one want this. Or do they?

I wanted to like these guys, I really did. But I just couldn’t. Patrick was too puppy like, too eager to please. Will was too self absorbed. Just coming out of relationship. They had there moments but over all just needed meld for me.

The narrator, seems to be the go to British narrator for any book based in that country. Don’t get me wrong, he does a good job. But I’m starting to get my stories/authors confused because his voice sounds the same for all of them.

This is a low-angst love story with a bit of smexy steam. Will, being a bit older and wiser, has been burned in the past and is not as willing as the still-in-university Patrick to jump into a relationship. But sex… Will just can’t resists Patrick’s adoration, so he sets Patrick up as a friends-with-benefits scenario in the hopes of keeping him at arms length.

Since Patrick is already feeling things for Will, this plan is set up to fail, and when Patrick does ask for more – everyone is feeling hurt and heartbroken – including Patrick’s brother (Will’s friend) – for being caught in the middle.

Ultimately the story ends with a solid HFN and a happy enough ending and certainly Patrick deserves it, though Will… I’m not so sure. Will was mostly a jerk throughout the entire book and he didn’t do much to redeem himself by the end. Luckily this is all sorted out in the sequel – thus raising my estimation of Will by leaps and bounds!

I really liked Patrick’s character, he was earnest and sweet and besides the obvious chemistry didn’t see how Will deserved his goodness. I was glad that I knew we got to see them later down the road, because I wanted them to spend more time together as a couple and with this alone, there wasn’t much of that.

All in all this was a nicely written, relatively light hearted romance with some nicely developed characters. 4 of 5 stars


Audio
Matthew Lloyd Davies did another fantastic job with this narration! I love listening to him and the sound quality and editing were great. He handles the emotions and the “acting” very well and makes the different characters unique and easy to differentiate. I highly recommend this as a way to experience this story.

This was a nice story and the characters were written nicely. The story was easy to follow and I enjoyed the narration.