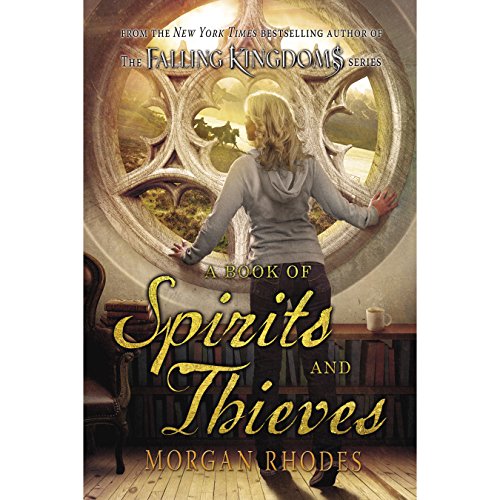 A Book of Spirits and Thieves

By: Morgan Rhodes
Narrated by: Scott Aiello
Try for £0.00

The lives of Toronto teens Crystal and Becca Hatcher revolve around helping their mother out at the family's used bookstore, The Speckled Muse. It's a relatively uneventful after-school job, until an package arrives addressed to her mother, Julia. Thinking it's nothing more than run-of-the-mill inventory, Becca opens it and removes the book inside, unwittingly triggering an ancient magic and intertwining their fates with the powers that flow from the mysterious leather-bound book. Two parallel worlds collide and Becca is left in a catatonic state after her spirit is snatched from modern-day Toronto back to the ancient world of Mytica. Crys is guilt-ridden, having witnessed the entire event, and vows to do whatever is necessary to save her...but from what? Nothing has prepared them for what’s in store.

Written in alternating perspectives that shift between modern-day Toronto and the ancient kingdoms of Mytica, Rhodes delivers a rich and suspensful series opener that will leave listeners breathless.

“A modern day Outlander filled with adventure and danger...a breathless tale that only Morgan Rhodes could tell.” (Hypable)

"Rhodes always tells a smashing story, and this is no exception. Magic and romance combine in a page-turning adventure. Can’t wait for more!" (Kelley Armstrong, number one New York Times best-selling author of the Darkest Powers series)

What listeners say about A Book of Spirits and Thieves

The only issue I have is that audible doesn't have the second book in the series so I'm left hanging. The book is typical Morgan Rhodes. Ties into the Falling kingdom series nicely. Although I think I'd read this first and then the FK series.

Loved the book, great story, great narrator just captivating. Then it stops, audible like with other book series don’t have the complete series. So you get really hooked and then you can’t continue.

A new way of looking at magic and dimensions.

Where does A Book of Spirits and Thieves rank among all the audiobooks you’ve listened to so far?

It started a little slow but got better. I hope it is the beginning of a series.

It was not the usual good vs. evil yarn.

Looking forward to the next one on AUDIBLE

Makes you want to hear the next book. Captivating. easy to visualize. Well done. Wish it was longer.

The ending is worse than a cliffhanger—it leaves the story unfinished! It’s been five years so I won’t hold my breath that there will be a second book published to make it a series. What a bummer.

Well actually a romping good listen! Great performance by the reader! Bravo! And the story was a very interesting twist and turn that even though full of tension, wasn’t all blood guts and evil. I liked it quite a bit! Going over to get the sequel right now! (Door slams and foot steps fade into the distance)

great precursor to the falling kingdoms

Would you try another book from Morgan Rhodes and/or Scott Aiello?

I should preface this review with the fact that I've been reading fantasy of one sort or another for over 25 years and writing it for 10 so I can be a bit of a snob on the subject. That being said, it's not a bad read. I think the audiobook's performance does it far more harm than does its somewhat clunky prose. I like the characters and the overall story - it's intriguing and I'm interested to find out more about this world with the coming follow-ups to this novel. However, I cannot listen to them in quick succession because the readers condescending tone and butchering of the dialects he's using are so bad I almost shut it off during long chapters in Maddox's world. It's almost entirely unbearable.

The book itself feels like a YA novel rather than a book belonging in the fantasy category outright. The language is very simplistic, like a teenager is actually telling the story rather than a narrator, the prose is clunky, the dialogue is okay but lacking, and the direction of the story became very predictable early on. I don't mind reading a good YA novel, but I like to know ahead of time so that I can be prepared to be pounded over the head with the story's theme or message or be lead by the nose by whatever mysteries they try to include. (I've actually read a number of YA books that don't do that, but they're so common in that category that I feel generalizing is allowed in this case.)

The characters are fun, interesting, and diverse (not just a boys' club), which is a refreshing addition to the fantasy genre.

His dialects were painful to endure.
His tone is frustratingly condescending.
His predictable 'fantasy' voice when he's describing something dramatic.

Do you think A Book of Spirits and Thieves needs a follow-up book? Why or why not?

Well, there is one so my opinion on the matter is unnecessary.

love this book very much just as good as falling k

I've got hook in this book almost just as fast as falling kingdoms. each characters grows on you. I give this book a five stars out of five. it keep you hook to the very end.

I love love the Falling Kingdoms series but was so turned off by the premise of this book I didn't even put it on my to-read shelf. I read a review for it from a blogger I follow thought...err...I guess I'll give it a try and wwwwwwWWWWWWOOOOOOOOOOWWWWWWWWWWWWWWWWWWWWWWWWWiiiieeeee! it was better than I could have even conceived of, I loved it as much or more than the series it spun off of.

Buy it.
Seriously, do it.