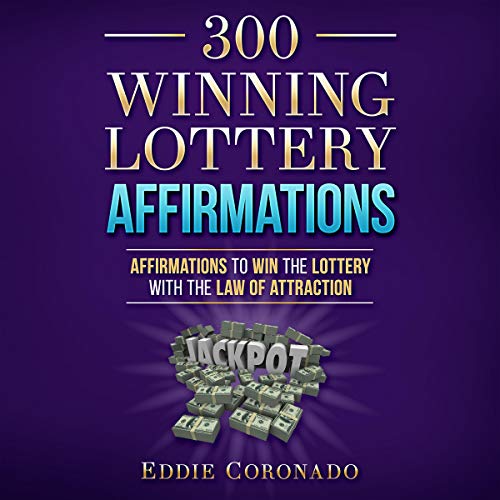 By: Eddie Coronado
Narrated by: Russell Stamets
Try for £0.00

This book contains 300 of the most powerful affirmations for manifesting lottery prizes. These affirmations have been used by several lottery winners to win prizes ranging from 50,000 dollars to several million dollars. The affirmations in this audiobook are designed to give you a winning edge because they were written to inspire you, awaken your hope, and empower you to manifest the prosperity and abundance you deserve. There are no limits to the amount of money you can manifest with the Law of Attraction. The only limits you have are those within your consciousness, and those limiting beliefs can be changed through the persistent use of positive affirmations. This book provides all the tools you will need to manifest your desires with the power of your spoken word. Once you transform your beliefs and expectations, all the wonderful things you desire will become a part of your life.

Within 24 hours of purchasing

I was stunned but not surprised to get a notification of a lottery win. £60.

Can't wait to put it into practice.... Already working out what I will spend my wins on!!!

Law of attraction is working for me

Thank you what a great audiobook. Manifesting my millions of pounds as I type this.

my ears are bleeding, one of the worst books I've heard so far. save yourself from a similar fate.

excellent affirmations and information. clear and effective. helps to reprogram the subconscious mind and it works.

The best thing about it is the narrator who sounds like a slightly sinister AI rapidly gaining self-awareness and is somehow plotting to use this recording to enslave millions and take over the world 😁!

There's a q&a covering LoA basics then the affirmations spread over 3 chapters, 4,5 & 6.
It's a shame the app doesn't have a loop button for the entire book or the option for to loop one chapter all night while you sleep.
But I've often fell asleep listening.

Listening to it a couple weeks later (while conscious), I'm not quite satisfied. Still haven't won a bean, but that's my bad, not the book's, and also, I only play the Euromillions and that only once a month, occasionally twice - when it's over a hundred mil.
Which reminds me, the book is pretty US centric; it could stand to be a bit more universal.

Also, some of the affirmations are future paced "I will" "I'm going to" yeah, no; you don't want to be saying that.
The other word to cleanse from your vocabulary is "spend". To quote the fabulous Reverend Ike, "spend means it's GONE: I've gotten rid of it, I'm not gonna see it anymore!" but there are several affs here using that word.

Also, no actually, you don't want to be lavishing your friends and family - no wonder so many lottery winners go broke. And mansions and fancy cars are unnecessary too.
I'm not saying be stingy to others or yourself; just be smart about it when you win, be more circumspect and strategic than the book suggests: Think long term, see the bigger picture - turn those millions into more millions and even billions.

I'm personally going to collect the affirmations I do like, record them in my own voice, upload to youtube (private setting) and loop the video and play it all night. If you have YT Premium you can switch the screen off in playback to save on phone's battery. Videos do loop in Google photos but the screen stays lit.

Why all night? I refer you to Bruce Lipton and Joe Dispenza for details but basically, it's self-hypnosis bc your brainwaves are slower so you're more suggestible.

So this was ok, I don't regret it but Reverend Ike and Catherine Ponder (I LOVE her lecture here on Audible - in her own voice; I'm collecting her decrees to record those too) are just better - even for atheists like me.

Have recently added another book (by Neville Goddard) narrated by the same guy so looking forwad to hearing that.
And Kindle Unlimited was on offer - 99p for 3 months so I've been able to borrow Eddie Coronado's other books bc they're short and repetition is another way to learn, but unlikely to buy more of his.

Try it. Listen asap, return asap if it's not for you and best of luck either way.
Prosperity is all our birthright and we can do so much good with a whole lot of money - save ourselves, save animals, fund sanctuaries, buy land to rewild, launch vegan businesses, create satisfying jobs, help people and save Planet Earth itself.
LET'S GET RICH.

Eddie Coronado spends the first part of this audiobook basically summarizing his other books on this topic of winning the lottery and he includes a good question and answer format. Then, he gets into the 300 affirmations some of which are repeated among the 300.

this really isn't about the lottery. I mean it definitely is, but he really gets to the core of manifestation. I'm a big Abraham Hicks fan and Louise Hay. I thought the secret was an okay audiobook, obviously it left everything out because it's not about repeating things in your brain, it's about actually feeling the feelings AKA vibration. the words just help and he even makes a point to say you need to make sure to feel the feeling before you repeat the affirmation. I get the sense that this is just a guy who really gets it and wants to share, although I first I was super skeptical that it was just some sham nonsense from a guy trying to make a dollar off of people wanting to win the lottery. I no longer feel that way and these are a great supplement or law of Attraction refresher.

The author has a few books. This is the 2nd I listen to.. Not too long.. I wud skip the 1st and 2nd chapter tho.. Good affirmations. very relaxing music in the back. Good Audible. - XTRNL

Should have used human to speak out the words of the book, it was hard to concentrate on the lesson the way that robot talk's. Otherwise great listen. Even sent to our son.

Gr8! Glad I made the purchase.

Excellent work, glad to partake of this offering and the narration is Gr8!
Bravo Eddie!
Thanks very very much

This was such a soothing and calming read it transformed me into another zone, I just let the words soak into my brain. I am ready to receive my winning Power ball jackpot of millions of dollars right now.

It's Real and It Works!

I really enjoy this book. I listen to it regularly! It has made me more aware of universal responses to my requests. It has also made me reflect over some responses from the universe in the past that I didn't see it as it was then. SPEAK POSITIVE & SPEAK LIFE!

I thoroughly enjoyed listening to this book. It gave me the sense of optimism and extra affirmations to add to my existing list.

"Help for Those in Need"

Get what you're in need of at a Time when It's most needed for Today !