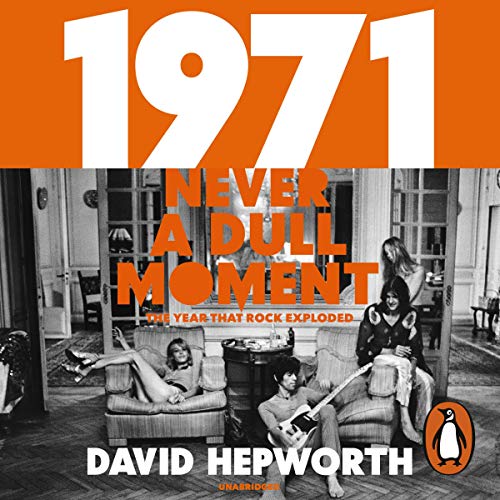 The '60s ended a year late - on New Year's Eve 1970, when Paul McCartney initiated proceedings to wind up The Beatles. Music would never be the same again. The next day would see the dawning of a new era.

Nineteen seventy-one saw the release of more monumental albums than any year before or since and the establishment of a pantheon of stars to dominate the next 40 years - Led Zeppelin, David Bowie, the Rolling Stones, Pink Floyd, Marvin Gaye, Carole King, Joni Mitchell, Rod Stewart, the solo Beatles and more.

January that year fired the gun on an unrepeatable surge of creativity, technological innovation, blissful ignorance, naked ambition and outrageous good fortune. By December rock had exploded into the mainstream. How did it happen?

This audiobook tells you how. It's the story of 1971, rock's golden year.

What listeners say about 1971 - Never a Dull Moment

I’ll admit I approached this title with more than a bit of bias, as 1971 was big year for me personally. I was 16, and was facing my last term in a school I loved, before setting off into the wide world of working for a living (University not being an option for ‘the likes of us’ as my old Mum said)

My first job was as a darkroom assistant on a local newspaper. This consisted mainly of spending the best part of my day in a dimly-lit darkroom filled with the odour of developer, stop-bath and fixative. My only company all day was the radio, which was permanently tuned to Radio 1, and which played the same 20 records (the dreaded BBC playlist) every 2 hours, all day long.

I suppose all 16yr-olds consider the music of their adolescence more profound than anyone else’s, and I was certainly no different. But David Hepworth’s excellent book has actually got me believing I was right. So many landmark albums released, so many new artists discovered (most of whom are still with us today) and songs that were a benchmark of their time. We had ‘Tapestry’ by Carole King, ‘After The Goldrush’ by Neil Young, ‘Madman Across the Water’ by Elton John, ‘Who’s Next’ by The Who, ‘Every Picture Tells a Story’ by Rod Stewart, and many, many more. And all the while, the career of a Mr David Bowie gains momentum…

This book has been a real joy to listen to, being both a reminder of the music itself but also a glimpse into the back stories of how the songs were made.

If I were to make one minor gripe it would be that author David Hepworth seems to have forgotten he’s narrating an audiobook (in which he’s talking to just one person) and instead he has a tendency to project as if he’s addressing a conference room full of people, which often verges on shouting.

That aside, this is an excellent title and a must for any music lover, but especially those who were 16 in 1971. Now, where’s my turntable?....

Where does 1971 - Never a Dull Moment rank among all the audiobooks you’ve listened to so far?

I tend to go for fiction so no comparison

Obvs.not a story but I liked ed how Hepwrth took it from what was clearly a bumper year for lps to seeing it as the year that rock started appealing to a different demographic than the single buyer and the fuse was lit on the current rock landscape.

What aspect of David Hepworth’s performance might you have changed?

He was a bit slurry (run it at 0.75 speed for the pub bore version) and a bit rushed but generally good.

The USA referenced elements were thinner interms of cultural resonance but still interesting and there's a bit of a sniffy "they would never be this good, again" element to reinforce the point but it's a good listen.

Good - But You Need To Be A Certain Age

I was sixteen in 1971. The writer, David Hepworth was 21, and in the music business. He is unabashed in proclaiming 1971 is the most important and fertile year for popular music, and he makes a very good argument. However the book does have its problems, as I said I was 16 at the time and never listened to all the, music which was out there. For example, The Who, whilst I like the band, I was not at the time a fan, and there is virtually a whole chapter on them, meaning very little to me. Indeed I found myself jumping these sections.

Each chapter is a month, he then recounts the music and musical stories of that month. All well and good, but as I say, unless you are a muso like him (or spend the whole book with Google next to you) , you will not know all the music or references. He does tend to wonder off onto how a particular song was written, or why. The end of each chapter he gives his top ten songs of that month, only about half of which I knew, but that may have more to do with me, than his choices.

There are hardly any, indeed if any at all references to straightforward pop music, the book is mainly about the higher end bands The Stones, David Bowie, The Eagles, Bob Dylan, Pink Floyd etc. No Mungo Jerry New Seekers or Dawn! Actually he does include in one top ten list Tie A Yellow Ribbon, but that’s about it. However in fairness he is recounting milestones in music, which these were not..

Not all the book is about music, nor indeed 1971. There are some interesting social history chunks about for instance drinking and smoking back then, and he obviously has to refer to before and after 1971.

Finnaly the narration. Others have said he seems to shout. The narration is not smooth, you can tell it was recoded at different times and he does sometimes seem to rant, I did notice he does seem to get excited trying to make a point, like a politician. I found the narration tolerable, but some may not, so well worth a listen up front before purchasing.

All in all a good book well written, full of fascinating facts and stores of the music scene back then. However, only a certain age group will enjoy it. I will recommend it if you were at least in your teens back then enjoying the contemporary music of that time.

As he jokes at the start, everyone would chose their own youth as the peak of popular music.

But 1971 does seem like one of those watershed moments, triggered possibly by the demise of the Beatles.

The real value of a book like this is only partly in the notability of the subject, and much more to do with the style of writing. Hepworth is warmly humorous throughout, never mocking or sneering, but subtly allowing certain moments of arch ridiculousness to identify themselves.

At times I had no choice but to pause and listen to the record under discussion - truly the indicator of good music writing (Revolution in the Head took me a long time to read for this reason).

He reads his own book here, and it’s like an epic pub conversation where you never get a word in, but you don’t mind a bit.

Before my time, but with me the rest of my life

I was 17 in 1995 but even the Britpop soundtrack to my teenage memories was balanced by music that proves in this book (& from my music collection) to be from years 1970-72. As old as music could be thrown on a jukebox before starting to argue how cool it was. There was never an argument. Marvin Gaye, Zepellin, Carole King, Floyd, James Taylor, Who, Joni Mitchell, Cat Stevens, James Brown, Bowie, ex-Beatles x4, Al Green, Stones, Neil Young. All casually explained in this book why, without having to protest, 1971 is pound-for-pound the greatest year in music. Good shout, great book.

Hepworth’s premise sounded rather dadrock: a man jabbing his finger at you about Dylan and Bowie, asserting the supremacy of his past over your present. That worry had stayed my hand for a while.

But I’m so glad I dived in - a sparkling cocktail of analysis and biographical nuggets, most of which were unknown to me. Fantastic easy listening I have knocked through in three days. Now on to the rest of his back catalogue.

What made the experience of listening to 1971 - Never a Dull Moment the most enjoyable?

I bet the book is great, just up my alley. But the author on this audio version has a really irritating voice, stopped listening to it after a while. I may buy the book because the premise of it fabulous. Sorry David Hepworth, I do love your journalist writings.

Excellent book from David Hepworth who also reads it. Hepworth makes a compelling case for 1971 bring the greatest year ago n rock history and I for one agree. I especially loved the playlist for each month

Loved this book. Younger than the author, this has always been a big year for me too nevertheless. But this book’s more than just an appreciation. It has Hepworth excellent journalistic and research skills all over it. His voice can be a bit excitable at time (but at least it’s behind read as it was written) nevertheless it’s packed full of interesting facts and sometimes provocative opinions. Even if you think you know all there is to know about 71 they’ll be something in it for you. Off to download another one of his.

He never lets you down. Beautiful language and context, typical erudition, assured detail.This was the year of my birth and I will carry the torch of 'Blue' 'Hunky Dory' and 'Who's next' as playing me into the world everywhere. Hepworth's books have all been a joy, I will keep reading until there's no more.