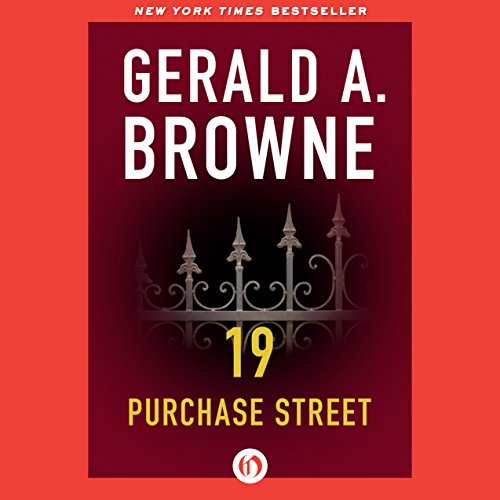 By: Gerald A. Browne
Narrated by: Charles Constant
Try for £0.00

In Gerald A. Browne's spellbinding New York Times best seller, a man bent on vengeance infiltrates a cabal of blue-blooded bankers that have taken over the Mafia.

In a quiet suburb of New York City, a mansion on a gated estate houses one of the most powerful crime syndicates in the United States - an elite Mafia whose dons belong to the finest families that the WASP establishment has to offer. Millions of dollars flow in and out of 19 Purchase Street, toted by bagmen who gladly risk everything to share in the syndicate's profits. Nothing disrupts operations - until a courier gets a dangerous idea.

To avenge a loved one's death, Drew Gainer joins the money-laundering scheme, plotting a billion-dollar heist with the help of a beautiful, daring woman and pitting himself against a ruthless opponent.

From New York to Paris to Zurich, Gainer risks his life to become the winner who takes all. But who is really conning whom?

What listeners say about 19 Purchase Street

Enjoyable, but not worth repeating the experience

Apart from the ending, which was truly pathetic on a par with... 'and they woke up to find it was all a dream!'..., plus the constant, boring reference to money, this was an enjoyable story.

Was 19 Purchase Street worth the listening time?

Paperback book that I lost

I am just so very happy that I was able to find this book. I was in Jr High School when I came across this book. I some how misplaced it. So the fact that I am am able to revisit is priceless to me.. When authors had more freedom..

The characters are well developed, the plot had promise and there were a couole unexpected twists, but it was so unrealistic that I was rolling my eyes half the time. Plus the sex scenes are way too explicit for my taste. The reader needed more variation to differentiate the characters and his British accents sometimes sounded Chinese or non-existent. Plus he didn’t pause between scenes which can be confusing. Not the worst book I’ve ever listened to but certainly not the best.