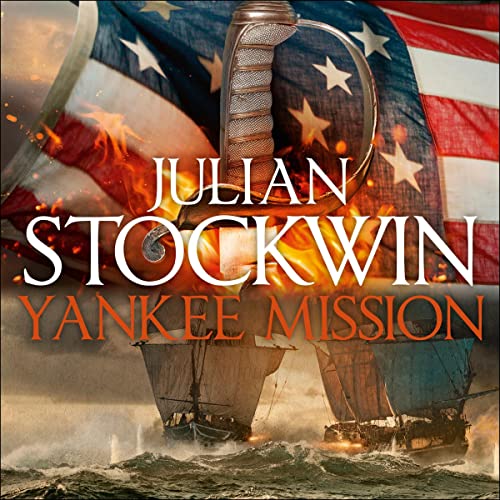 By: Julian Stockwin
Narrated by: Christian Rodska
Try for £0.00

Swashbuckling adventure during the great Age of Sail.

With Bonaparte held to a stalemate in Europe, the race to empire is now resumed. Britain's ambitions turn to the Spice Islands, the Dutch East Indies, where Admiral Pellew has been sent to confront the enemy's vastly rich holdings in these tropical islands. Captain Sir Thomas Kydd joins reinforcements to snatch these for the British Crown.

The two colonial masters of India and the East Indies face each other in mortal striving for the region—there can be only one victor to hold all the spoils. The colonial genius, Stamford Raffles, believes Britain should strike at the very centre of Dutch spice production, the Moluccas, rather than the fortresses one by one but is fiercely opposed. Kydd, allying himself to this cause, conspires to lead a tiny force to a triumphant conclusion—however the Dutch, stung by this loss, claim vengeance from the French. A battle for Java and an empire in the East stretches Kydd and Tyger's company to their very limits.

"Paints a vivid picture of life aboard the mighty ship-of-the-line." (Daily Express)

"Fans of fast-paced adventure will get their fill with this book." (Historical Naval Society)

What listeners say about Yankee Mission


Kydd has seemingly forgotten everything he has learnt from all the other books. He gets things wrong that whole other books in the series have been about learning. lots of POV from far away characters that do little to advance kydds personal plot. Nice however to see that kydd is not infallible.

Love this series of books, so this is why I can honestly say I'm so disappointed in this "Yankee Mission"
This book is so different from the previous books that it could have been written by a different author.
The intelligence and pure guts of the main character are no more. Captain Kidds seems to have taken a dumb pill. Or was this just a direction from Julian Stockwin publisher to simply to sell more books in the state's?

However, I do detect some fatigue and intrepedation in him as he inevitably, like the rest of us, gets older. But the war with Napoleon and also almost everyone else in the world goes on. Now it's the brash young Americans .... again. As usual the fine stay of characters and their different individual voicing is breath taking. It is a real mark of quality for the same voice actor to be heard throughout all of the Tom Kidd stories, like Bray in the UNEXForce books. It provides a good anchoring, to use a nautical term, of the characters in the listeners mind. Helping to create a picture in my mind of not just the character but of the whole story line and atmosphere of the situation the characters find themselves in. Another triumph and again we are left on the proverbial cliff edge eagerly awaiting the next instalment.

The summary description for this book is wrong. I was expecting an adventure in EastEnders which I think is actually one of the earlier books!
I was wondering when Kydd was going to head there!
The story feels disjointed with several sub stories and feels a little convoluted.
Nevertheless a good rip roaring ride in the end as always!

Overall another good Kydd adventure.
Not one of Stockwins best novels but still a worthwhile read.
Felt the ending quite sudden which disappointed a little.
Looking forward to the next instalment.

Stockwin is back, and he's given us another exciting naval history lesson from 1812! without spoiling, this time Kydd is thrust into the mechanics of the industrial revolution and the continued inclusion of well researched non-fiction into this excellent series does the author proud. a lot occurs in this book and there's clearly a drive to keep events comming but i feel may have come a bit close to a rush in the final chapters. would have liked an epilogue on this one! either way, roll on book 26!

I had been waiting eagerly for this to come out.

Another superb instalment of Captain Kydd,s story and it was great.

The ending came rather unexpectedly and all too soon.

Already looking forward to the next.

It is telling that after over twenty novels I am still so thoroughly engaged.

For Kydd to hand the piloting of his ship to a very young girl, from his enemies country, in highly dangerous waters, was a stretch of credulity

As were the whole Kydd series, this was exceptional listening. I have really enjoyed it

More focus on Naval action, industry and general life is a great thing indeed, when in the hands of Julian Stockwin. Christian Rodska knocks it out of the park once again, and Yankee Mission is a fresh and exciting addition to the Kydd series.

I enjoy listening to previous books about Thomas Kidd, but this one was not as good. Spent too much time on recovery and steam engines and not enough time the last chapters.

Love the dive into the technology of the Navy. I was worried this series was hitting a wall. It is only getting stronger.

Wonderful story. When is the next coming?

Again, Christian Rodska dazzles us with the performance of our favorite Captain Kydd Who has overcome horrific conditions well physically and mentally to take out his work on the sea. We meet an old friend from the USA who has become an enemy… But the story is not over…

Is some of the history about the inventions real?

I truly appreciate the detail and historical importance presented in this novel. It made me do some research on the advent of Steam in the navies of the world. I did look up Commodore Perry and could find no reference to a battle for Lake Erie though. It may be somewhere and I'll carry on my research. Overall, a thoroughly engrossing book and I'd recommend it highly.