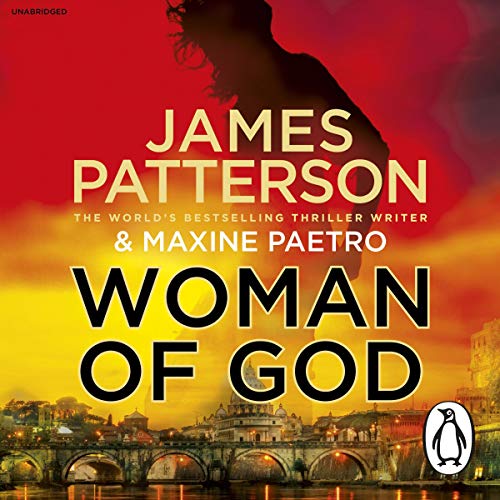 By: James Patterson
Narrated by: Therese Plummer
Try for £0.00

The world is watching as massive crowds gather in Rome, waiting for news of a new Pope. It's a turning point that could change the Catholic Church forever, as one of the rumoured candidates, Brigid Fitzgerald, would be the first female Pope in history. But Brigid has made a legion of powerful enemies and is a target for all those who fear that the church has lost its way - dangerous adversaries who won't accept challenges to tradition.

Locked in a deadly, high-stakes battle with forces determined to undermine her, Brigid must confront her enemies before she loses everything...including her life.

What listeners say about Woman of God

I have been listening to this for the last few days and have just this minute finished, I feel the need to get my thoughts down straight away.

Being non religious I wasn't sure what way this story would go, given that it starts with the possibility of a woman becoming Pope. We are then thrown back in time by 20 years and meet Brigid Fitzgerald, a young doctor working in horrific conditions. We see how difficult it is living and working in a war zone, and hear how traumatic it is through the narrator's voice.

The story moves forward and shows us glimpses into the life of Brigid and those people she meets along the way. She is an amazing character who bonds with most she meets, forming strong friendships which last even to the end of the story. She suffers heartbreak on more than one occasion but always manages to find a way to continue on her path. She fights back after being injured and works hard to achieve the goals she has set herself.

The main point throughout the story is something which even I appreciated. There is a lot of religion, talk of outdated beliefs within the Catholic Church, and attempts to rid the world of those who go against the doctrine taught in mainstream churches. Even when faced with events which would have any normal person running for the hills, Brigid forces herself to move forward, her beliefs so strong that in her heart she knows what she is doing is the right thing.

The religious message is a strong one and is something which may well put some people off. But if you go into the story with an open mind, as I did, I think you will get something out of it which goes beyond it being a simple story.

Special mention should go to the narrator who put so much emotion into her performance I was finding it hard to hold the tears at bay on several occasions.

Not your usual Patterson or Paetro

With the exception of chapter 1 - I didn't get beyond chapter 49 - this does not 'read' like a usual James Patterson novel. It certainly is no Woman's Murder Club. I got the impression that it was a cross between a Mother Theresa biography and Florence Nightingale's memoirs, and as I am no fan of biographies, I pressed on beyond my tolerance of the same, waiting for the main story to kick in. It took too long to do so for me, so I'm bailing, having invested a good few hours of my time.

Fantastic read. Well recommended. You are drawn in

Fantastic read. Well recommended. You are drawn in by the first page and takes you on a journey.

I like James Patterson but this book is just 100% god sell. Struggling to see the point of the story. It’s just a religious book and I don’t have the slightest interest in god nor religion.

Took me a long time to get into it

Took me a long time to get into but then turned into a great story even if a little far fetched!

Where does Woman of God rank among all the audiobooks you’ve listened to so far?

Thus is the first and what a joy

The main character was so belieavable with an smazing life story

This is not your usual JP book. In fact I honestly wouldn't have guessed it was one of his if I didn't know. Thoroughly enjoyed the story, it was well crafted and the details painted vivid pictures in my mind. The narration was good, the music at the beginning is pointless and thankfully ends quickly, I did worry it was going to be throughout, but it's not!

No ....it just seems to loop around the same scenario chapter after chapter....yes its about a woman, her life, her belief in God and to almost saintly levels, throw in a few too many civil wars and tragedies ....it kinda started to become inevitable ...predictable

Would you be willing to try another book from James Patterson? Why or why not?

Have you listened to any of Therese Plummer’s other performances? How does this one compare?

No, I think she did it very well!

If this book were a film would you go see it?

No, however when it comes to the pope and they make a move of Robert Harris' Conclave - that I would go see!

What did you love best about Woman of God?

The story was compelling, probably because I had been to these places and the incidents were not exaggerated. Some of the romantic moments were a little "so so", I mean a woman so much of the world getting gooey about a kiss?

What was one of the most memorable moments of Woman of God?

The reunion back in Africa... I had tears in my eyes listening to the meeting unfolding. Again, bringing back too many buried memories of my earlier years.

The performance was a little frantic at times. Understand trying to dramatise, but the story speaks for itself and perhaps if she had read the book before she may have had a better idea of the big picture and put less panic in some places.

don't want to spoil it for future listeners. Lots of emotion running through the story

Has left the door open for sequels. Many interesting characters with more stories to expand on.
Thanks for a good "read".