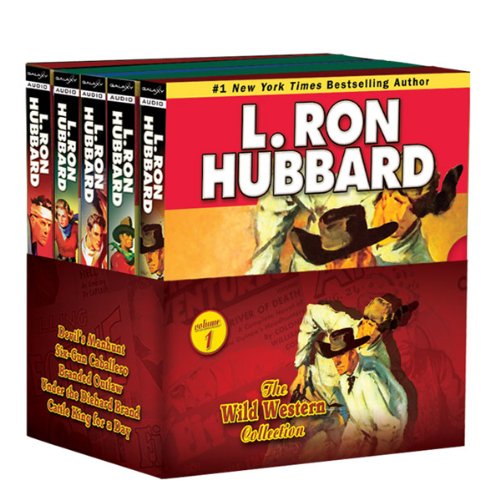 Saddle up and enjoy this L. Ron Hubbard western audio collection. Included are: Devil's Manhunt, Under the Diehard Brand, Branded Outlaw, Six-Gun Caballero and Cattle King for a Day.

Devil's Manhunt
Striking gold, Tim Beckdolt is a man on the brink of a new life - until a killer forces him at gunpoint to mine it - jumping his claim. Tim manages to escape, but soon finds himself being pursued like an animal in a bloodthirsty manhunt through vicious terrain.

Under the Diehard Brand
When Lee Thompson is making the long journey from Texas to Montana to see his aging father, he gets wind of the fact that the old man, one Sheriff Diehard Thompson, is losing control over Wolf River's town troublemakers. So, Lee decides to step in.

Branded Outlaw
When Lee Weston's father writes him that an old enemy, Harvey Dodge, is back in town, Lee rides out in a hurry from Wyoming to Pecos, New Mexico, only to find his father murdered and the family ranch burned to the ground. Certain that Dodge is to blame, Lee sets off to settle the score but gets into a fiery Colt showdown in the town of Pecos.

Six-Gun Caballero
Michael Patrick Obanon, proud owner of a 100,000-acre spread willed to him by his father, suddenly loses his entire inheritance when a band of criminals makes false claims on the ranch. Faced with having to save his property and his people, Obanon takes a courageous stand against the renegades.

Cattle King for a Day
Chinook Shannon seeks the real identity of the man who killed his grandfather and is now after his ranch - with forgery, sabotage and murder riding by his side.