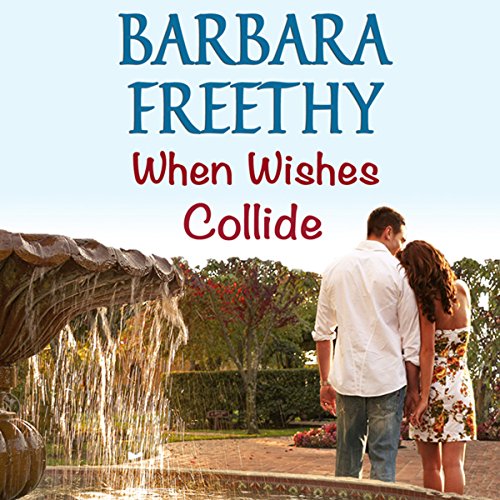 By: Barbara Freethy
Narrated by: Amy Rubinate
Try for £0.00

In a moment of desperation two strangers make a wish, only to discover that sometimes a wish can take you down an unexpected path. When Wishes Collide, Book #3 in the Wish Series, is an emotionally compelling and suspenseful contemporary romance by #1 NY Times Bestselling Author Barbara Freethy.

Adrianna Cavello's life changed in an instant when a break-in at her restaurant took the life of her boyfriend and left her too traumatized to return to work. Months later, with everything she's ever wanted on the line, Adrianna makes a wish by tossing a coin into a fountain known for making miracles.

Wyatt Randall is also in need of a miracle. Two years earlier, his ex-wife kidnapped their daughter, and Wyatt is desperate to find his little girl. A new lead raises his hopes, but quickly fizzles out. When his coin clashes with another, he sees what little hope he has flying away.

Adrianna and Wyatt soon learn that they have more in common than two coins that collided. In fighting for the lives they lost, they must learn how to trust again. Only then will they discover that meeting each other might not be what they wished for, but exactly what they need.

(Each book in the Wish Series is a standalone story, but shares the common theme of wishes.)

What listeners say about When Wishes Collide

A sweet romance that kept me listening

I really enjoyed listening to this book. It sucked me in from the very beginning. It was a sweet romance with a hint of mystery. The narrator brought the characters to life!

repetition is good when practicing piano but not when writing a novel. the first half was agonizing to hear the female lead lamenting her lost "like." Not a love-- she didn't want to marry him. only at the end did the story move briskly enough to engage me, ending by getting tied up in a sad but tidy bow. I also thought the narrator made the male lead sound like a cardboard characterized cop with too much anger. just my two cents...

Started off so good. Then the ending was terrible. Think it must have been two different writers. Don't get me wrong it was the predictable ending just very poorly done

Would you try another book from Barbara Freethy and/or Amy Rubinate?

Would you ever listen to anything by Barbara Freethy again?

Haven't read (or listened to) this author's before and probably wouldn't again. Just not my cup of tea.

Held my interest with anticipating each new chapte

It exceeded my expectations. Narrator could be a little less monotone. Most memorable was when father and daughter reunited and I always love a happy ending.

Sale-priced for a reason.

I knew this was going to be a fairly simplistic romance, but honestly, there was not a single cliché left out, and the writing was painful - 40 minutes in, the writer confused the words "garner" and "garnish". Relationships that made very little sense, dialogue very unconvincing. And the narrator just made it worse – a voice with a little color or variety and an accent that flattened all the vowels: lips becomes "leps", then become "than", whole becomes "hall" and so on. Will know better next time.

I'm not knocking "feel good" books. They make up the greater majority of my reading. This was an enjoyable, somewhat majical story. It is not memorable, it is a light read that has an interesting love story. Narration was okay.