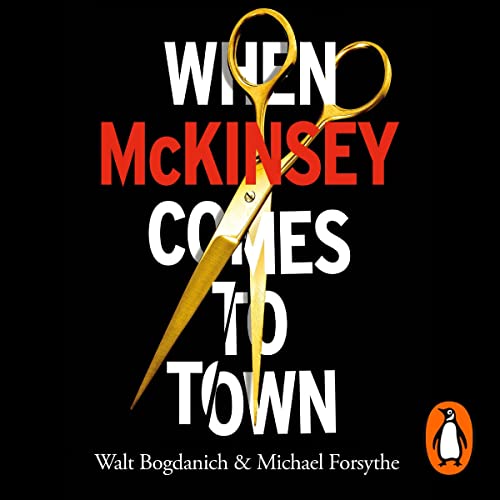 When McKinsey Comes to Town

By: Walt Bogdanich,Michael Forsythe
Narrated by: Ari Fliakos
Try for £0.00

An explosive exposé of the world's most prestigious and successful management consultancy.

McKinsey earns billions advising almost every major corporation as well as countless governments, including Britain's, the USA's and China's. It boasts of its ability to maximise efficiency while making the world a better place. Its millionaire partners and network of alumni go on to top jobs in the world's most powerful organisations. And yet, shielded by non-disclosure agreements, its work remains largely secret—until now.

In this propulsive investigation, two prize-winning journalists reveal the reality. McKinsey's work includes incentivising the prescription of opioids; ruthless cost-cutting in the NHS; executing Trump's immigration policies (the ones that put children in cages). Meanwhile its vast profits derive from a client roster that has included the coal, tobacco and vaping industries, as well as some of the world's most unsavoury despots. And for the last six decades, McKinsey has been the brains behind many of the most loathed and controversial business practices: mass lay-offs, outsourcing overseas, soaring executive pay, as well as the key innovations that led to the financial crash.

McKinsey proudly insists it is a values-led organisation. When McKinsey Comes to Town is a parable of values betrayed: a devastating portrait of a firm whose work has often made the world more unequal, more corrupt and more dangerous.

"Every page made my blood boil." (Joseph E. Stiglitz, Nobel laureate, author of The Price of Inequality)

What listeners say about When McKinsey Comes to Town

I could not stop listening. Brilliant expose of a firm that has brought distasteful to most places it has touched.

there is some good research and dastardly tales here, but the link to McKinsey in much of it is quite tenuous. on the authors’ theory McKinsey caused pretty much every modern calamity up to and including global warming, the opioid epidemic, the financial crisis and the murder of Jamal Khashoggi.

also ends very abruptly and without a proper conclusion.