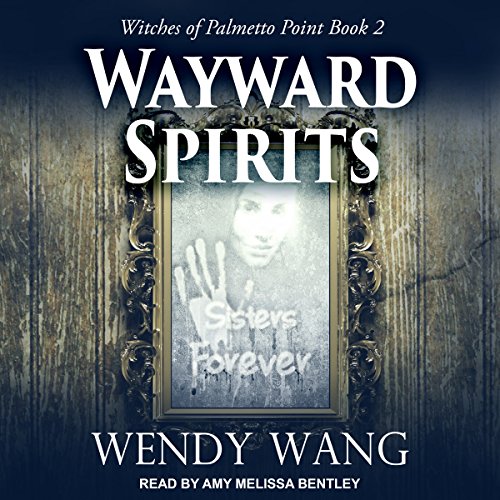 By: Wendy Wang
Narrated by: Amy Melissa Bentley
Try for £0.00

The dead don't always rest in peace... Deputy Jason Tate has seen a lot of terrible things in his time, but nothing quite as strange as the case he just picked up. Is it a suicide gone wrong? An accident? Too many things aren't adding up, and some are downright inexplicable.

When it gets weird, he calls in psychic/medium Charlie Payne. But weird doesn't begin to cover it when they encounter a dangerous spirit, hell bent on murder. Now they must work together to stop it from claiming another life, or risk becoming its next victims.

What listeners say about Wayward Spirits

Ghost will kill you for REVENGE

love all these book's couldn't put the series down. had to read them all quickly

Charley is an intuitive young lady and her cousins are also with their own powers.
Charley helps with cold cases and current cases with the police/Jason. In steps Tom Sheron, but who is he really?
I love this story, the characters, and the narrator.

I tend to get bored with books but this series is keeping me interested to keep reading the next book in line.

I promise you, this is a great series. I am enjoying each book on its own merit, love the whole plot, story line, characters.
Getting ready for next one now.

this was a good book But I don't trust Scott, I think he's got a hidden agenda. just saying. love the narrator.

I like the main character and the main cop who helps her out. It was a good story and it had a few creepy elements too.

she did it again

couldnt stop listening. alot of great surprises.
another great one by Wendy Wang.
about to buy the third installment.

Good story line, nice development of characters. It’s hard to turn off. I have had to rewind numerous times after falling asleep with it playing.

Excellent story telling. I highly recommend these books. I love the characters and the ease with which you fall into their stories.

It's a great paranormal mystery series

I really like these books I find them very entertaining I have been doing the audiobooks and I'm a little upset that it's only going up to book four I hope that they decide to put the other ones on audio. In this second installment, I find I really like it because it has two stories at once I feel I feel that these stories need to be told. I don't wanna give any spoilers but I think that the character really starts to grow. She has a new love interest and real-life problems. I also feel the narrator has a big part to play with an audiobook and this narrator is exquisite in her storytelling.