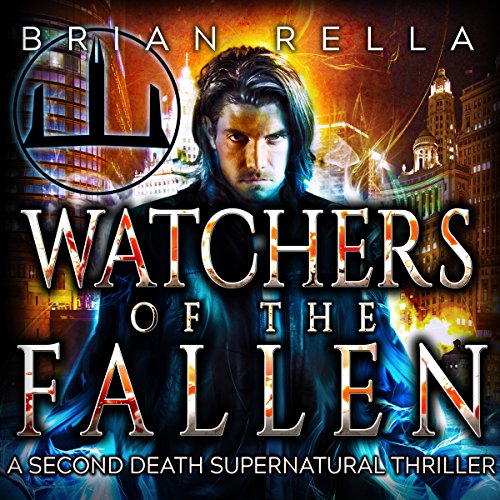 Watchers of the Fallen

By: Brian Rella
Narrated by: Todd Menesses
Try for £0.00

Frank Bishop has been at war with fallen angels since he was five years old. That's when they first tried to kill him.

A group of supernatural warriors called the Watchers saved Frank that fateful day. They taught him how to be a powerful wizard and warrior. But nothing could prepare him for what Jessie and Arraziel have planned.

Frank blurs the line between good and evil in his all-consuming quest to stop Jessie and the Fallen in book one of Brian Rella's dark urban fantasy series, The Second Death.

You'll love Watchers of the Fallen because everyone loves a hero with a dark side.

What listeners say about Watchers of the Fallen

This is a great story with some great depth.
It has moments of flash backs which can become confusing but they quickly sort themselves out.
The characters and well fleshed out giving realistic portrayals and wonderful development.

The narration is well performed giving uniqueness to each and ever character.

I was given this free review copy audiobook at my request and have voluntarily provided this impartial review.

This book surprised me!! I didn't really know what to expect when I went into it, but I loved it!! The plot was intriguing and exciting. It focuses on Frank, a watcher and Jessie, a girl who had a horrible life and is now in communication with a dangerous demon. It's up to Frank to try to stop Jessie before she unleashes hell on earth. We get to see Frank then and now and learn how he became what he is! We get to see what happens when a frightened and abused 14 year old is brought to the brink and is now in control of more power than she knows what to do with!!

I loved Frank. He seems to be a gruff and cranky old man, but we get to see the real him! He is hardworking, loyal, brave and an all round awesome dude! Meanwhile, Jessie's story broke my heart. She is abused and broken and finds a way to get back at those who hurt her. Unfortunately, it's an incredibly evil demon who is intent on escaping the prison he was captured in.

In all, this was an interesting Angel vs Demon kind of book. It was awesome to get the back story on the Watchers and even how the demons came to be. The ending leaves me wanting to read the next one as soon as possible and I'm glad I already have it loaded and waiting!!

Todd Menesses was good, not great, but good! He had a good few tones and voices and his cadences were great, I just found his voice for Jessie too.....false. It grated on my nerves and was hard to listen to. His voice for Frank was great though.

This is book one and does a fantastic job of introducing the characters and laying the groundwork for the series. It takes a bit to get used to switching back and forth between characters and past and present Frank telling the story but once you get used to it the story is fast paced and very enjoyable. The narrator does a great job bringing the story and characters to life. I look forward to more in this series and from this author.

The Second Death Series starts off with a bang. As the story develops and the characters begin to do battle, you realize that the mythology behind the story is rich and vast. Very well thought out. The story has a very nice flow and is easy to imagine you are watching a film. The characters are well developed and the creatures are monstrous. Not for the faint of heart.

Todd Menesses did an excellent job as always. He breathes life into the characters.

I requested a free review copy of this audiobook and I am leaving a voluntary and honest review.

I really liked this one, good stuff! Exciting from beginning to end, great plot, awesome characters/development. I love the genre, and it was GRIPPING! Excellent story and excellent narration, Frank and Jessie are great characters. I'm definitely excited to read/listen to more in the series!
I was given this free review copy audiobook at my request and have voluntarily left this review.

Our protagonist Frank Bishop is a Watcher. If you read the prequel you’ll remember Frank as a talented young boy accepted by the Watchers who had just saved his family from the creatures sent to kill them. Jumping forward, Frank is now a young man; an experienced Watcher who has been given the task of finding Jessie and retrieving the book of Araziel. There are other Watchers on Jessie’s trail, but she is protected by the overlord Nalsuu and manages to elude them. Jessie has managed to free another Fallen and she is being guided to a third who will raise an army for the overlord. Will Frank be able to catch and stop Jessie before ultimately releasing Nalsuu himself? Stay tuned to this thrilling adventure to find out. This audiobook was given by the author, narrator, or publisher at no cost in exchange for an unbiased review via Audiobook Boom.

I took a bit to get used to the format of the book. Not sure I liked all the jumping around. I did enjoy the story but it’s harder to get into than I’d hoped. Was a tad slow at times. Ultimately it was ok and I may continue the series if the mood strikes but it’s definitely not on my must read list.

Watchers of the Fallen

I enjoyed the way this series started. The story was pretty original and the action was nice. I had the impression that this was in the horror genre, it is not horror. I would consider this modern fantasy or action/adventure maybe. The narration left something to be desired for me, but it didn't detract too much from the overall experience of this novel for me. I was left looking forward to the second book.

This book was given to me for free at my request for my voluntary and unbiased review.

So, this book was...good, for the most part. It starts a little slow as you get to know the characters and the world is built by the author. I think this part could have been a little faster paced, but it wasn't end of world for me. Once the action truly gets started, though, it's much more exciting and entertaining. The narration is a little dry, but fairly good. Definitely not as good as Luke Daniels, Joe Hempel, and Jeff Hays, but FAR from the worst I've ever heard. All in all, if you like urban fantasy, you should check this one out. I'm going to listen to book 2.

didn't care really for it

I recieved this book free of charge for an honest review. I tried to get into but I just couldn't. It was kinda slow with not much actually happening and when it did it was rather anticlimactic. The voices kinda bugged me. not the narrator so much but the impersonations I found irritating. I'll try the second book maybe it'll be more appealing, this wouldn't be bad as kinda of a teen/young adult book and probably better to read than to hear in order to sink into it

I found the premise of this book promising. Something unique, perhaps with a little Dresden Files and Monster Hunter International sprinkled in. In the end, it sort of was, but not in the same calibur.

The story follows 2 main individuals: Frank, a Watcher and Jessie, a girl commanding a demon (and communing with another... entity).

Frank's story is told both in the present, and past. We get to see how he was first introduced into his role as watcher, and his battles in the present. We actually lead with his past and then jump into the future for so long that I figured we were done, but the author pops back to the 80's a few times to reveal more of Frank's past. Honestly, I found the mysteries of his past more interesting than what was going on in the present, and was disappointed that the character development started there was either destroyed or left hanging depending on the character.

Modern Frank is supposed to be a tired old soul that's got a "dark side" (according to the synopsis), but I didn't see that at all. I see the tired, but I also see a virtous person that doggedly presses on regardless of the obstacles before him. Unfortunately, beyond that, the author doesn't really do a whole lot of character development for present Frank, so we don't know why he feels the way he does or does the things that he ends up doing. For being the protagonist, he's pretty forgettable in my opinion.

Jessie is a tad more interesting -- at first. We learn she's in control of a demon and eventually get tidbits of how that came to be and the past she was seeking to run from. Even though the author hammered home the point she hated men and was abused ad nausem, it still didn't emotionally connect for me. We were being told something and not being made to feel it. That groundwork is what was used to drive the character forward in the book though, so it ended up making all of her decisions and actions seem more superficial plot point than anything else.

Sadly, the narration didn't really help things. The narrator was perpetually in moviefone mode -- that is to say he was constantly reading in an overly-dramatic, false baratone that was more distracting than atmospheric. I found the voices for the characters equally disappointing. The lead antagonist is supposed to be a 14 year old girl in an adult's body, but he reads her like a breathless 4 or 5 year old. Our protagonist is read like a gruff, but whiney old codger, but his actions, for the most part, just didn't match up. Dialogue was also a little cheesy and painful, but that can't all be laid at his feet.

The book ends without resolving, or even expanding on the few things that I actually took an interest in (that possible-dimension jump? What's up there? Where's Frank's mother?), but spent plenty of time setting up for a sequel -- including a new chosen one (weren't we lead to believe Frank was the special one?). Sadly, I'll be passing as there just wasn't enough here to justify investing in another book in this series.

I was provided this audiobook free of charge in exchange for my honest review. I hope the author and narrator find it useful.