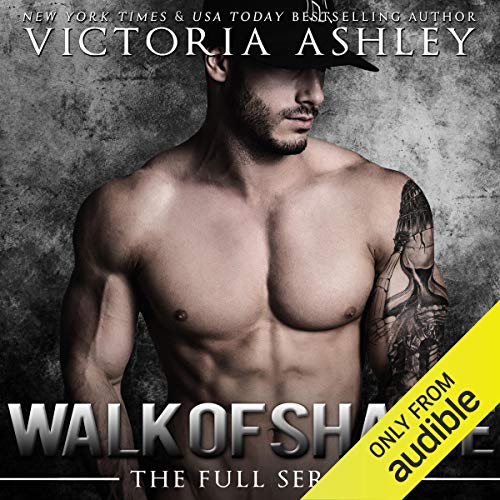 By: Victoria Ashley
Narrated by: Alexandra Shawnee,Beckett Greylock
Try for £0.00

My name is Slade Merrick and I'm a f--king sex addict... I've been told it's a problem. But I see it as a passion; something that I'm good at. And who the f--k stops something that they're good at? They want me to seek help; get my cock in check. Don't judge my lifestyle. You're no better than me. Just admit it, you like to f--k too. Sex is what I do best; my own personal high, so I embrace it instead of being ashamed. When I'm not f--king, I'm slinging drinks at Walk Of Shame or stripping my way into your bed; another thing I'm good at. Every woman's darkest fantasy brought to life. So, am I stopping? F--k no. Sex is beautiful, raw, and erotic and I get off knowing I can have it with anyone I want... with the exception of her. Aspen. She walks into the club swaying those hips, instantly drawing my cock to attention. She's pure perfection. That is, until she opens that mouth, drawing me in and for the first time in forever I want something more than sex. I want her and she hates it.

My name is Hemy Knox and I'm a f--king heartbreaker... I've hurt the one person that means the most to me in life; the only woman I have ever f--king loved. I let the drugs, alcohol and wild life take over; consume me. I got her where I wanted her and ripped her f--king heart out. Since then, I've spent countless nights having dirty, meaningless sex with a multitude of people; only leaving them wanting and begging for more with no regrets. Some may even call me the devil; soulless. They look and judge, but there is one thing they don't know; no one does. I want more than this life of stripping and sleeping around; the never ending party. I want love and everything that comes with it; that high that never ends. The problem is... I only want it with her. Onyx. She refuses to be mine... again. She's smart and it's a mother f--king pain in my ass; guarding her heart while ripping mine right out of my chiseled chest. I can't say that I blame her. I always was a dumb ass when it came to the emotions of a woman, especially her. She wants to see me suffer as much as I made her; watch me wither and f--king die at her feet. She wants to crush me until I'm no longer breathing and I will let her, because it hurts far less than not having her as mine. I will stop at nothing to make her mine again.

My name is Cale Kinley and I'm a f--king virgin...Well, with the exception of my tongue. The countless things I can do with my tongue are bound to leave you breathless and begging for more, but more...is something that I can't give. It's a choice. My choice. There's a reason for that. A very good reason, and that reason is her. Riley. She's the only woman that I want to bury myself deep in. The one woman I have wanted since I was old enough to f--k. I never got my chance though, because she left. She had no choice and it stung like hell.

What listeners say about Walk of Shame

Absolutely loved the walk of shame series 1-3 , now need to read 4-6, well worth a read and listen

Victoria couldn't have picked better people to read this book . Alexandre Shawnee and Beckett Greylock have the perfect voices to play these characters . They really bring these stories to life . Congratulations to all on an outstanding audible book .

Victoria "WOWED' me.... again! I have listened to everything she has brought to audio and loved it! I can't wait to see what she brings next, it's an automatic download for me!

GRAB A SEAT, DIM THE LIGHTS & ENJOY THE SHOW

Center stage are three lust-drool-dream and sigh-worthy sexy male Strippers who work (and play) in the Walk Of Shame Bar - let's put the spotlights on and introduce you to them:-

Slade a dirty-talking unapologetic manwhore who'll never 'go there' twice but behind the unpenetrable facade of 'happy' he's hiding a heartbreaking tragedy which he drowns out with sex, sex, sex and more sex. It'll take a miracle to break down his walls.. and, lucky for him, in the audience minding her own business is a blond that's going to change and rock his world. However, it's not going to be an easy fix to mend Slade's broken heart.. but it will be worth it.

Then there's Hemy the pierced tattooed dirtyboy with a man bun and absolutely no inhibitions who is 'up' for anything, do anybody.. in any combination and he parties hard. But four years ago his self-destructive lifestyle of drugs and alcohol, which was numbing his childhood demons, eventually pushed away the love of his life. So now, at 23, sex is all he's got.. but it's love he craves.. and only one woman holds his heart - Onyx the woman he threw away because he didn't know what he had til it was gone. But a very different Onyx returns and a planned ménage and a secret is going to change everything.

Finally there's Cale who is very skilled with his tongue but he's still a virgin - there's only ever been one woman for him.. his childhood best friend but they never crossed 'that' line and his feelings remained unsaid. Then she left before there could ever be more, she moved on with her life and wasn't meant to came back.. but she did - and now Cale will get a second chance to air those feelings, bare his heart and win the love he craves.

There are good dynamics between these raw, passionate, sexy, dirty-dirty-talking alphas who have all been good at hiding their true selves but, with love, they morph into loving, caring and possessive partners who'd give their last breaths for the woman he loves. They are short dual POV stories but they don't seem short when blended together like this and with each there's character development, raw passion, romance, heartfelt sentiments, breathtaking scenes, plenty of orgasms, drool-worthy hunks, strong females and second chances... yeah count me in!!

Loved every moment of this book!

The sex to romance ratio was excellent! Can we get male strippers next?!

Seriously, Slade/Aspen are my fave!

loved it and the male narrator voice is so hot my ears were on fire I love Sebastian York too , but this guy is just as good maybe even my new favorite , he needs to narrate more books !!!!!!

Is grandma reading this to me?

The story may have been good but the female voice is awful. Sounds like grandma is reading a story to me.

I could not finish the story.

What didn’t you like about Alexandra Shawnee and Beckett Greylock ’s performance?

Alexandras voice does not fit the character

Choose a different narrater and it might be good. i tried to listen but that female voice....It's so annoying .A 23 years old female and sounds like she's 83.....

Three novellas: Slade, Hemy, and Cale. These guys bar tend and strip for the male stripper club Walk of Shame. If you've ever been to a male strip club you know the guys are hot as hel*.

Slade's story is about recovering from a personal tragedy.

Hemy's story is about overcoming his demons from child abuse which lead to him running off his one true love due to drug and alcohol abuse as a coping mechanism.

Cale, a virgin, (only in fiction do you have a male stripper virgin) story is about a second chance at true love.

There are many scenes with detail description of the guys stripping on stage. There's also a lot of detailed sex. I don't listen to novellas unless their in a series like this one but I can tell you these stories are not shallow.

The three guys are close, Slade and Cale are room mates, they cross over in to each others story.

This is my second book by Victoria Ashley and I want more.

Worth a credit/$$. Absolutely worth a credit but I purchased the series for $4.86. The best book purchase I've made so far.

The female lead in this story sucks in air at every single period and comma. It's actually very very annoying. If you can get past her high-pitched Minnie Mouse voice, maybe you can get through this book, that is if you can tune out the air sucking every 10 to 20 seconds.

New Author for me and definitely WON'T be my last!

Walk of Shame is the full series of Slade, Hemy and Cale in one audiobook and well worth the credit! 15 plus hours of steamy alpha male strippers and two great narrators. This is a great guilty pleasure listen-low on angst, high on hotness and excellent narration. Beckett Greylock does an incredible job differentiating in the stories between the three leading men and his deep voice is uber sexy (watch out SebYo)! Alexandra Shawnee does a great job as well. Sometimes her voice is a little nasally, but overall solid performance.

This is my first book or audiobook by Victoria Ashley and certainly I'll be watching for hers in the future.

Female Narrator sounded way too old for this type of book. I struggled to finish the series, I rolled my eyes several times throughout the last book.