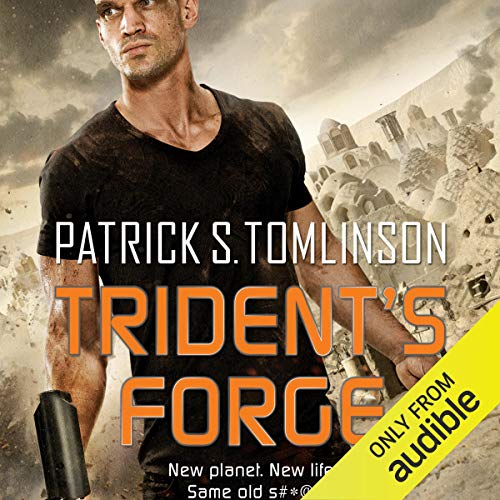 By: Patrick S. Tomlinson
Narrated by: Mirron Willis
Try for £0.00

They've made it this far. If only that increased humanity's chances on this new planet....

Against all odds, the Ark and her 30,000 survivors have reached Tau Ceti G to begin the long, arduous task of rebuilding human civilization. Meanwhile, on the other side of the world, Tau Ceti G's natives, the g'tel, are coming to grips with the sudden appearance of what many believe are their long-lost gods.

But first contact between humans and g'tel goes catastrophically wrong, visiting death on both sides. Rumors swirl that the massacre was no accident. The Ark's greatest hero, Bryan Benson, takes on the mystery.

Partnered with native "truth-digger" Kexx against both of their better judgment, Benson is thrust into the heart of an alien culture with no idea how to tell who wants to worship him from who wants him dead.

Together, Benson and Kexx will have to find enough common ground and trust to uncover a plot that threatens to plunge both of their peoples into an apocalyptic war that neither side can afford to fight.

What listeners say about Trident's Forge

First of all, how can I rate the book 5 stars yet rate both the performance and story 4? Because there are problems with both, but the story as a whole holds up and concludes satisfyingly. The narrator is great at the end when all the excitement builds, but getting there he makes quite a few pronunciation errors, such as "taunt" for "taut" and "tapped" for "taped." He also has some "accent on the wrong syllable" episodes that made me wonder where he was from. I liked his main voice, and a couple of the accents, but his Japanese girl voice is the same as his squid-alien voice. It was annoying at times, but by the end, the book proved enjoyable, so 5 stars.

The books starts off slowly if you are expecting something like The Ark. And, as in The Ark, there are grammar errors (incorrect past perfect) that I care about but others don't. It took 5 hours to stop being merely an interspecies / intercultural exploration and start being a detective story. This is always interesting. (Although Asimov's Caves of Steel and its sequels will always be standards of this.) The story cannot hold up this interesting development however, and bogs down again for a few hours. Then when things are finally falling into place, the story is very exciting and interesting for the last couple of hours. Here the character development shines and you are rooting for the good guys. There is a great scene with an antagonistic ally, and a nail-biting climax where you don't know who will die heroically, and you just don't want any of them killed. Great scenes here.

So, for me, the book started out boring, but then ended well and enjoyably. There are some discussions of the nature of humans and the right and wrong of different assumptions. Good listening.

I loved this book and the series. It's even better than the last one. Science fiction coupled with comedy. Children of a Dead Earth land on new planet and begin making a royal mess of things. And while different from the first book in the series, the events stand alone so you can start with this one if you'd like but I would advise you to begin with the first book. The only thing I would say is that I had an awful trouble downloading the second part to my iPhone. I ended up having to download at standard quality, download the second part to my computer and then move the second part in iTunes to my iPhone. It was a hassle and I have yet to hear from the Audible Technical team with who I was working with. I contacted the technical team on 4/6/16 and it is now 4/8 and still no report on why there is that downloading problem. But the book itself was wonderful. Great story and great narrator.

Good twists in plot. Kept the excitement high with some swashbuckling. Good imagination and description of alien life.

Great book!! Although 2nd in series, can be read independent of 1st and be every bit as enjoyable... First contact, and the evolution of culture/s is done w/ some fabulous perspective, as well as introspection... Love aliens that are portrayed as alien. This novel does that beautifully while simultaneously presenting the inherent similarities between sentients... Good mystery, Wonderful narrative and dialogue, and superb action and pacing... Narration is pretty decent, but sounds a bit odd at times w/ certain accents attempted, along w/ some minor mispronunciations, but doesn't detract or distract... Outstanding ending sequences, and I sincerely hope there's more to the story...

This (so far) two-part series has really grabbed me, and I definitely want to hear more. I'm with the previous reviewer, however, who says he wants it quality, not quantity, so take your time, Mr. Tomlinson, and maintain the excellent rhythm you've got going ... we can wait!
I especially like the protagonist Benson, a sort-of everyman of the future, bemusedly trying to take in all that goes on around him and dealing with it with his unique flair. And in the latest book, I very much like Kexx, the first-person character of the Atlantans (wish they had a less cumbersome-sounding moniker).
My only quibble is the literary conceit of Kexx using the "zzz" sound for the most common words of "their" and "he" and "those" -- it might look okay on the page, but it interrupts this otherwise excellent narrator's flow, making him sound stilted and strangled when describing an event or depicting Kexx's perceptions of that event.
Otherwise, though, I'm impressed ... keep up the good work!

Love this series. Original Story and characters. Please write another book in this series. Don't let the publishers rush you so the content is crap. Stick with the quality not quantity.

Liked it even more than the first one

More humor and action than the first in the series. Characters rven better drawn. Looking forward to a third indtallment!.

This book sets up a lot of stuff and only gives you bread crumbs before you finally get clued into everything on the last couple of chapters. The hook at the very end makes you want to consider the last installment

A Bridge for the Children

The Children have made land fall and American Football is returning. Then we have first contact.