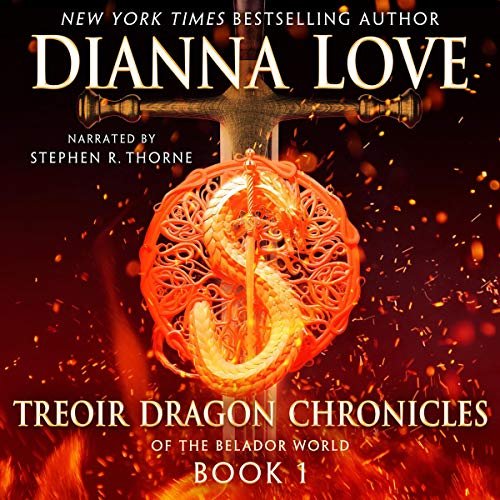 By: Dianna Love
Narrated by: Stephen R. Thorne
Try for £0.00

Dragons didn’t just show up out of thin air centuries ago, and not all of them died in the Dragani war.

Atlanta hovers on the edge of chaos and pandemonium as rumors fly about supernatural beings living among humans. Deadly preternatural predators have been held in check for many years by the most formidable pantheons. One angry being has had enough and accesses majik of an ancient grimoire to release abominations capable of taking down the most powerful of humanity’s supernatural protectors.

As the dragon-shifter king over Beladors living secretly among humans, Daegan is tortured by having failed to save his loved ones two millennia ago when a vindictive goddess captured him. With a second chance at life, he’s vowed to protect his new family and destroy anyone who harms them. He’ll have to find all the parts of a grimoire divided up and hidden thousands of years ago for any hope of saving his captured people and a world ready to launch high-tech weapons to wipe out unnatural beings.

The entire human race has one hope of surviving what’s coming for them, but only if fear of the unknown does not drive the humans to kill their greatest protector first.

What listeners say about Treoir Dragon Chronicles of the Belador World: Book 1

Beladors and dragons what more could you ask for?
Nine books within a year! Be still my heart.

Has all the characters we have come to love and gives a lot of the details and history that we my have been wanting in the Belador series about Daegan.

Because we always want more, right? And more coming soon is always something we love to hear!!

I loved the Beladors in the first series. I was glad to see that the story continued on in this series. I suggest, before reading this book that you read the Belador series first. There are a lot of characters and history that came from that series. This book jumps around from character to character and reading the Belador series first will make it easier to follow. Someone is trying to expose the existence of super naturals to the world by using a red dragon. Daegan is trying to figure out who is posing as his red dragon. While this is happening, his Beladors are going missing and being threatened. I listened to this book on Audible. I liked the narrators voice. He did a good job on different characters’ voices.

Off on another adventure

This is an awesome "spin off" from the Belador series. You can begin here at book 1 but I highly recommend going to the beginning and starting with Blood Trinity.

Stephen Thorne brings excitement & edge of your seat thills to the Belador World!

If you love the Belador series, you are going to love the Treoir Dragon Chronicles! The characters we love are still present for this adventure, but we are now in the Dragon King’s head, and we learn about his past. Dianna Love’s use of imagery lets you vividly see what’s happening in your head as you’re reading the book. I couldn’t put it down, and I can’t wait for the next book!