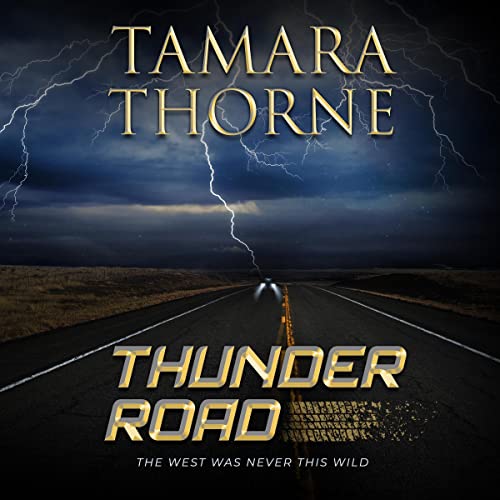 By: Tamara Thorne
Narrated by: Jamison Walker
Try for £0.00

There’s a little wild west amusement park in California’s high desert. Old Madelyn Ghost Town attracts tourists every weekend. There are all sorts of rides and attractions peppered among the historic buildings. Here, you can take a ride through the Haunted Mine, have an old-fashioned chicken dinner, or watch a Wild West show.... And if you camp out, you just might see a UFO or two.

Between the modern town of Madelyn and the historic park, lies the compound of The Prophet’s Apostles. They think the lights in the sky have been sent by God to warn of the coming apocalypse. They want to convince and convert everyone they can - and they’ll do so by any means necessary.

As a young serial killer stalks Madelyn, leaving blood-soaked horrors in his wake, the earthquakes begin. A monstrous freak storm pounds the arid desert, and the military harasses an astrophysicist and her assistant as they study the night sky.... Sheep are mutilated. People are flayed. And Prophet James Robert Sinclair realizes that God is truly speaking to him.

The Savior is returning. The  Four Horsemen are about to ride. And the Apostles are taking no prisoners.

“Somewhere east of Edwards Air Force Base, south of Fort Irwin, folks have seen the signs in the sky, stirring weird beliefs and strange desires. That’s only the beginning, because the forces that converge over the desert have designs of their own - and desires that transcend human flesh. Tamara Thorne has captured the flavor and terror of such alien intrusions, but she forces us to take another forbidden step beyond the edge of obsession, with profound consequences the reader cannot forget, or survive with innocence intact.” (Jacques Vallee, author of Passport to Magonia)

“Tamara Thorne knows it’s no fun being scared unless you’re having fun being scared. She’ll take you on a weird and harrowing trip down Thunder Road that’s a helluva fun ride.” (Aaron Hughes, FantasticReviews.com)

What listeners say about Thunder Road

I enjoyed the narration of Jamison Walker, perfect for this book

We have cult leader claiming the end times has come due to unexplained lights in the sky, people vanishing, farm animals mutilated. . The followers are waiting for the Four Horsemen from the Book of Revelations to make an appearance. But none of this is exactly what you'd expect.

A book that I couldn’t stop listening to!

It’s always great to listen to a book that keeps me gripped throughout! The individual characters’ stories kept me wanting to know more, and it was so satisfying to see all of the character plots coming together to finish the book off nicely. As always, Tamara Thorne always finds the perfect balance between the supernatural and the everyday lives of her characters. The narrator also does a brilliant job at giving the characters their own personalities, which makes them more relatable.

Strange goings-on in a dessert town. Aliens, religious cult and a bad kid so much for the locals to deal with. Oh and the end of the world. Great story couldn't put it down, wasn't shore about the narrator at first but I think he did a brilliant job. Highly recommend.

Wow... Cowboys, aliens and serial killers, oh my! Another brilliant story by Tamara Thorne, fantacially narrated by Jamison Walker. I never thought I could go through so many emotions in one book, and never have I wanted to strangle a fictional character before. Lol! Honestly, this is now one of my favorites. I highly recommend this to all who love a wild ride into a action-packed, story. BRAVO!