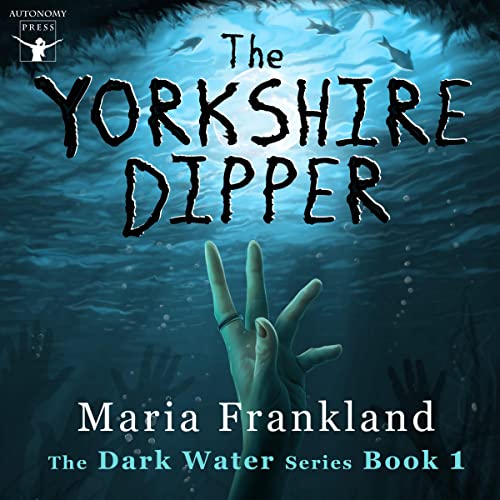 By: Maria Frankland
Narrated by: Naomi Rose-Mock
Try for £0.00

Seven drownings. Three months. Who is to blame?

Lauren is fed up with covering local small-town news in Northern England. The bride-to-be and mother-of-one dreams of recognition and accolades as a national journalist. Yet, the dark and disturbing reporting opportunity that lands on her doorstep is one she would never have invited. When it is thrust on her, she is duty bound, both professionally and personally to investigate.

Lauren is the voice for the women whose lives have been cut short in the river Alder. She will not stop until she discovers the link that binds the deaths together and gets justice for them. But she is a lone voice, overpowered by the police and other officials. Lauren has to make herself heard, even when this compromises her own safety.

Her police sergeant fiancé begs her to step away and leave it to the police. Seven drownings, she continues to argue, in three months, warrants blame. How can the deaths of these innocent women be deemed accidental?

Described as a whodunnit novel with a twist in the tale, don't miss this Yorkshire crime story.

What listeners say about The Yorkshire Dipper

engaging to the end.

Really enjoyed listening to this book, some nice twists and turns in the story that leaves you guessing. Wasn't sure about the ending as it left me feeling the story was unfinished but on reflection I think it was a good plot twist. It was beautifully Narrated by Naomi Rose-Mock and she kept me engaged throughout .

The story is interesting and the writing is very good and pleasant to read. My problem with the story was actually the main character, I did not like her. Like, at all. She was pushy, reckless, sometimes TSTL and I never quite grasp why she thought it was murder in the first place, seems kind of forced. Anyways, it's rare for me to like any reporter character because they all seem so entitled and reckless, here it was no different.

I looove the narration, the best part of the audiobook for me was hearing Naomi Rose-Mock bring life to the characters.

I was given this review copy audiobook at my request and have voluntarily left this review.

A mystery with murderous consequences.

Accident or Murder, the police seem to believe it's always an accident, women coming from the public house that have had too much to drink and slipped to their death on the grassy bank into the freezing cold river, however, journalist Lauren Holmes thinks differently but she has to convince her police Sargeant fiance Mark.
I like the way the author tells the circumstances of each victim so you understand what has happened to them.
I believe that by halfway through the book two clear people could be the murderer but you won't know who or why till the last pages of the story.
I like the style and flow of the writing but for me maybe a little less of the family mourning.
I found the narrator too be a ok.
I received this audiobook for free from the author and wanted to give an honest opinion.

Maria has done it again! A book that I could not put down with lots of twists that makes it a great read for anyone who loves thrillers! I can’t wait for her next book to be available on Audible.

Really enjoyed kind of suspected the killer but didn't take away from the book at all for me. Really felt for Mark and liked that the story was told through the eyes of more then one character.

The Yorkshire Dipper has all the elements that make a good mystery/thriller. It was my entertainment on a cross state excursion and made the time goquick as I couldn't wait to fnd out what happened next. The characters and plot was rich. The narrator Naomi Rose-Mock was also great. I thought her voice, pitch ans speed were perfect.

I recieved this book free for my honest review.

The Yorkshire Dipper is a well paced mystery/ thriller that in my opinion is on its way to becoming a classic. The storyline is well done and twisted just enough to keep you on the edge of your seat guessing. Naomi Rose-Mock narration is superb her voice variation is amazing. If you love thrillers I would highly recommend this book. This is my honest unbiased review DO NOT MISS THIS ONE.

Not to be missed ! it is a fabulous thriller book.

From time to time one discover a less known author and wonder … why isn't this writer all over the NY best list ?
Maria Frankland is such a writer and i can bet she will soon become the famous one … I told you so !

Her writing is fabulously engaging, her characters are extremely well developed and her story is well rounded.
’The Yorkshire Dipper’ is a classic whodunnit story. Women drown after a night of partying and drinking and at first everyone think that their demise is just due to the alcohol abuse. But the sheer number of them becomes too much to stay believable.
The authors leads you to guesses the culpit roughly around the 75% mark, but … off course it would just be too simple ! You get hints that maybe you’re on the wrong suspect … but you really need to wait for the last two chapters to get full closure.
Woaw. I loved it !
As i caught myself few time thinking … I already know that … i would say that some details were a little redundant ( like the circumstances of Will’s brother death, DC Ingham’s back story, or Mark’s pain ), but not enough for infringing on my liking the story.

I would highly recommend this book. The narration was great with voice variation for each character, well paced.
I was fortunate to receive this free audiobook and leave this review voluntarily.

There are so many twists, turns and surprises in this book. I found this author on TikTok and I’m sure glad I gave this book a chance. The characters and plot are beyond intriguing and I listened to this book in two nights at work! I couldn’t stop! The end leaving you wanting the next book immediately!! Read this thriller asap!!

I love this author and this was my favorite yet. Crazy twist in the middle and at the end.Can’t wait for the next one!

I loved this audiobook! I’m a fan of murder mysteries and this one checked all the boxes. The characters were compelling, the pacing tight, the twists unexpected. I would recommend it to a friend. Good job!

Good story,though I knew 'whodunnit' right off.Women go from a bar into the river and the police don';t seem to care.Naomi Rose-Mock was a very good narrator.I was given this free review copy audiobook at my request and have voluntarily left this review.'