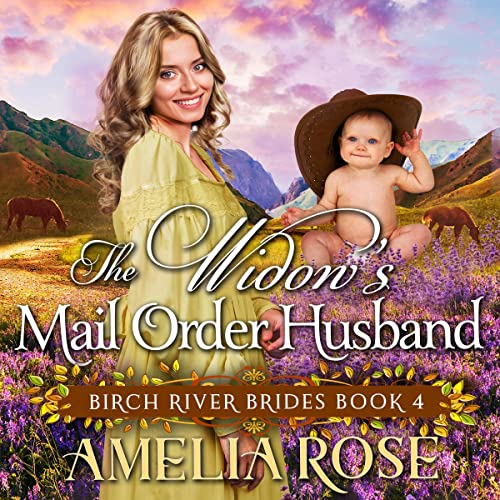 Can a heart once broken ever love again?

Robert Mace has had enough.

After watching some of his closest friends find love and happiness with mail-order brides, the fact that his own advertisement is yet to receive a single reply is frustrating, to say the least.

But then he finds another advertisement, this time from a woman seeking a husband.

Robert just can’t resist his curiosity, and so he writes a reply to the listing, eager to know more about this unconventional bride—but is there more to this proposal than it seems?

After the death of her husband destroyed her whole world, Tiffany Downing has abandoned all hope for a happy future for her and her infant son, Lucas.

Distraught with grief and unable to find a way to move on from her loss, Tiffany has no intentions of ever marrying again.

And yet her wily mother-in-law, Linda, apparently has other plans in store for her.

Tiffany is furious to learn that Linda advertised for a husband on her behalf, but when she reads Robert’s reply, she soon finds herself considering the match—even if she knows she will never love again.

As Tiffany, her son, and her meddling mother-in-law come to join Robert in his hometown of Birch River, it surprises her to find how well they all seem to fit together.

But how will Tiffany ever be able to let Robert in and give their relationship a real chance, when she is still burdened by grief?

The Widow’s Mail Order Husband is a heartwarming story of starting over and letting love in. Will Tiffany learn to let go of the past and give her life with Robert a chance? Or will she let the wrong man slip away?

To immerse yourself in this charming story, scroll up and click “Add to Cart” right now. With love, you never know what is in store.

What listeners say about The Widow’s Mail Order Husband

Book 4 in Birch River series sees the town Deputy, envious of the male friend mail order wedded bliss answer an ad to be a mail order husband to a desperate, recently widowed rancher with an infant and dependent mother-in-law. Clean, sweet, hopeful, read in any order.

A joy for a quick read

The West was a hard place to live, but this book makes it seem full of hope and love.

Good mail order bride story. This is a nice addition to the Birch River Brides Book. I liked that the mother-in-law was a key person in the story.

Predictable and simplistic in story and writing style, I do not recommend this book. The audio performance lacks emotion. Pass this title up. Audible has so many better stories from which to choose.

This is another good book. Robert was wanting a wife and family. He sees an add from a woman wanting a husband. I thought Tiffany was a little ungrateful at first. Nice but ungrateful. This is an interesting storyline. I like the fact that Robert was a sheriff. He did everything right. Gina Dobbs did a great job narrating this book. If my review is any help will you please click on the helpful link below.