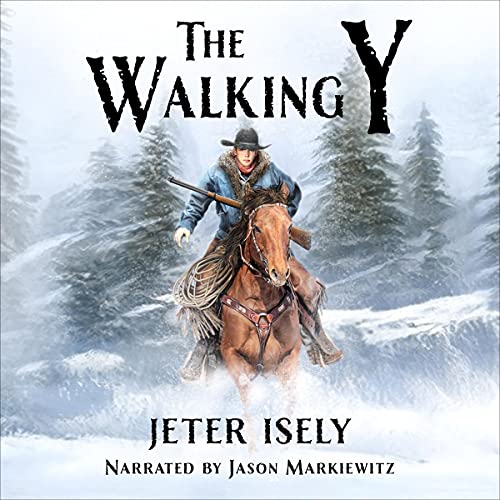 By: Jeter Isely
Narrated by: Jason Markiewitz
Try for £0.00

A failing ranch, an irritable old cowboy, and a handful of teenagers standing between him and financial ruin.

With nothing more than a skeleton crew and his 70,000-acre ranch on death watch, Woody finds himself backed into a corner. His neighbor Senator Bell greedily awaits the bankruptcy so he can grab the ranch on the cheap and build the biggest spread in the county. But Woody isn’t out of ideas yet. Determined to pull the ranch back from the brink, he hatches an ingenious plan to snag some orphaned teenagers and put them to work as cowboys.

When Eric and his friends are given the chance to escape their cold orphanage and work on a down-on-its-luck Montana ranch, they jump at the chance. But little do they know how much danger they’d find themselves in. Treacherous farmhands, unpredictable horses, and a complete lack of experience are only the beginning.

But Senator Bell won’t let the ranch slip out of his grip so easily - and he doesn’t care who he has to crush to get it. If bullets and kidnapping don’t do the trick, he and his accomplices have plenty of other nasty tricks up their sleeves to make sure that The Walking Y quickly becomes just another memory....

If you like gripping westerns packed with action, adventure, and a country charm like no other, then you won’t want to miss The Walking Y. Listen today!

What listeners say about The Walking Y

I enjoyed listening to Jason Markiewitz, made this a great listen. Bought the story and characters to life.

If you want a plot , that has all you want in a western . A evil lawyer, a true and loyal foreman. A ranch in trouble.
A great story . believable characters, with weaknesses and strength.
You could see the ranch and people .

The Walking Y written by Jeter Isely is a charming, amusing, captivating and entertaining western novel. The story revolves around the fate of a rancher and his property in the early 1900s.

With the owner on the brink of bankruptcy after a weird series of unfortunate events and with his neighbor, a corrupt and greedy politician with his eyes on the ranch and not shying away from some dirty business in order to get his hands on the prize, things get complicated really fast. But Woody, the owner, has some tricks up his sleeve and is decided to put up a fight!

The audiobook version of The Walking Y is expertly performed with talent and emotion by voiceover artist and award-winning narrator Jason Markiewitz.

Jason perfectly captures all the nuances of the story and manages to bring each of the characters to life in the listener’s mind with distinct voices and accents. He reads, acts, infuses the action with urgency and emotion at just the right time.I absolutely loved his performance for this work and I will be sure to check him out in the future, as well.

Sharply written, filled with credible characters, great action and pushed forward by an interesting plot, The Walking Y written by Jeter Isely will appeal to fans of westerns everywhere! Add to that the superb narration from Jason Markiewitz, and you have on your hands a winner.

If you liked this review, please vote Helpful below and find more of them here and on theAudiobookBlog.

I also post honest reviews at the author, narrator, or publisher's request, you can get in touch with me for more details.

Great listen for any western fan!

Kept me wanting more and more! Got through it too quick because I couldn't put it away! great characters and story line!

A fun story with unpredictable twists, interesting characters, some horseplay, horse sense, and horsemanship. I enjoyed the realistic dialogue and interesting plot. Not your typical Western, but it resonates. And the audio performance really adds to the story.

I enjoyed this whole story it kept me interested all the way to the end!

A real western by a real cowboy!

What a relief to find a real western by a real Cowboy! I'm not huge on the romance that has started labeling itself western and had all but given up on the genre but this book brings the story back to it's roots with action, danger, gunshots, humor, and dastardly villains.

Set in 1904, Woody is a Montana rancher facing the last payment on a lawsuit that happened years ago. that payment is depriving the ranch of it's last vestiges of life, which is exactly what his neighbor - Senator William Bell - is seeking.

Woody might actually give up the ranch if not for the arrival of a young runaway who starts to bring life and youth into the skeleton that was once Montana's finest ranch. Soon, young Eric devises a plan to spring loose other orphan friends that he knows could help the ranch.

But Senator Bell and his hired gun aren't to be dissuaded so easily. The Senator wants that ranch and the political cloute it can give him. With the help of his terrible hired man, he will stop at nothing when it comes to take that ranch, though he's always careful to seem innocent and clean. All that is a stark contrast to his true self who will do whatever it takes to claim the Walking Y.

bullets fly, danger is real, and you're going to be drawn into each moment as Jason Markiewitz's talent brings you straight into the action. His cast of voices, his talent to portray each person, will certainly paint a vivid image of each and every character.

An easy Five Stars! Especially if you're looking for the likes of a real old western!

A Western Reminiscent of L'Amour

I grew up reading Louis L'Amour books and watching westerns on television. This story felt as true to any of those that I have read. Jeter Isely weaves a tale of good vs. evil where you are rooting for Woody and can't wait for Roger and the Senator to get what's coming to them. The Narration by Jason Markiewitz was excellent and each character was unique. I could picture the characters with the voices, accents, and emotion he used throughout, and really grew to hate Roger! This was a very well done audiobook and I highly recommend it to any western fans.

It wouldn’t be the Wild West if there weren’t bad guys, and you’ll learn to resent the guys who are making it difficult for the folks of The Walking Y to just eke out a living. The story grows on you and you’ll grow to cheer on the kids who take on a lot of responsibility to not return to a dead end life. Hard work is a joy when you’re in good company! Jason Markiewitz is a natural to narrate this book—he deserves a gold star for guiding the reader through this plot!

This was a nice story. Classic Good versus Evil Western. The storyline had some interesting twists to it, and the Narration was done very well. I liked the intuitive way the Ranch hired their new Employees.