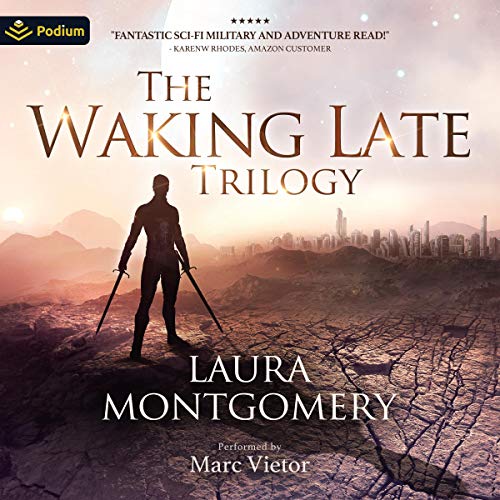 By: Laura Montgomery
Narrated by: Marc Vietor
Try for £0.00

Contains all three books in the Waking Late trilogy.

Gilead Tan and Andrea Fielding survived their stint in the military, got married, signed up to emigrate to a terraformed colony world, and went into cold sleep for the journey from Earth. While they slept, the starship went through the wrong fold in space and settled for a different world, a wild world.

Three centuries after the founding of a colony on the uncharted planet, Gilead awakens to find humanity slipped back to medieval tech and a feudal structure.

Out of the Dell (book two)

On the planet Nwwwlf, in the lost colony of First Landing, the original settlers carved out one sylvan valley, a lone outpost where humans flourish. But their bright hopes and best intentions devolved over centuries into a rude replica of medieval feudalism.

Gilead Tan, who had been held captive for centuries in his sleeping cell, survived treachery and pain to free a small group of sleepers. But he and his friends now face the perils of life outside First Landing’s sanctuary - without their powered armor, their tools and technology, or anything else they need save for a few chickens.

Gilead must establish a safehold for his crew, but the alien environment does not welcome them, and petty bickering threatens their meager resources. He hopes that a trace of smoke - spotted above a distant ridge - beckons them to a better place.

The starship Valerie Hall failed to reach the terraformed world of its original destination. Instead, it found a habitable substitute where the settlers split into two factions. First Landing devolved into a rude replica of medieval despotism. Seccon might promise more.

Or so hope Gilead Tan and his companions.

Gilead spent three centuries in cold sleep, held there by a First Landing custom that decreed only one sleeper could be awakened every 50 years. Once awake, Gilead freed two dozen of his fellows - all soldiers like himself - and led them into the wilderness.

Close to 200 civilians still lie trapped in the decaying cryo-cells of First Landing. Their captive slumber haunts him.

But despite its vaunted freedom, Seccon has one rule. No one goes back to First Landing.

What listeners say about The Waking Late Trilogy

A remarkably coherent setting makes for a believable sword and planet scifi tale. Worth a listen.

Tons of holes in the plot

main character can be describe simply as guy that tries to do something but gets beat up and then fells really bad about it.

Lastly heres what broke this book for me at one point two characters are talking about how if the king finds out what character A is doing, he would be kill, and how awful the king is, so character B tells character A his own secret that aligns with character A views perfectly and then he makes a remark on the king and character B becomes hostile to him.

It made no sense, it feels like character traits are being pull from a hat and then someone runs to the table and flips it.
Producing some of the least memorable and unrealistic characters I can think of.

Highlight: at one point one of the character makes a remark on how everyone in court is speaking from a really cheesy play and all I could think is now you know how I felt the last 15 hours.

I don't judge a book without finishing It. I made it, but dam, that was hard.

By far one of the most enjoyable series.

These books were just fun to listen too. I had trouble stopping even when I should have been doing other things. I am not going to lie and say these are the same as LOTR or similar greats. But they are very well written books with interesting (and flawed) characters, that kept you interested. No perfect Mary Sue protagonist. The good guys weren't perfect and the bad guys weren't pure evil. The chapters flowed together well and the battles were well written without dragging on.

I hope to see a lot more of this series in the further and plan to read more from this author.

So glad I found this bundle. Fantastic book and I really wish it hadn’t ended. Hopefully there will be more books in this series and more audible titles from the author.

Great story that never gets boring. Interesting plot and the narrator did an awesome job.

leaves you waiting for a following book

very good story and narrator, it leaves you waiting for more. Only one problem in a lot of chapters at the beginning several seconds were missing in the recording

A Great Story Worth Your Time

I really enjoyed all three books of this series. It had elements of history and politics, individual triumphs and righteousness battles fought over the cause of freedom.

Mixed Feelings on this Omnibus

The outstanding premise and world-building of Laura Montgomery's Nwwwlf carried me through the ups and downs of this omnibus to the amazing finale that is Like A Continental Soldier, well worth the price all by itself. Sleeping Duty was quite enjoyable: 3 stars. Out of the Dell was quite painful to get through: 1 star, one could skip it entirely without losing much. Like a Continental Soldier: 5 stars.

Though initially difficult to empathize with the characters, it turned out to be a satisfying story of rebellion against tyranny.