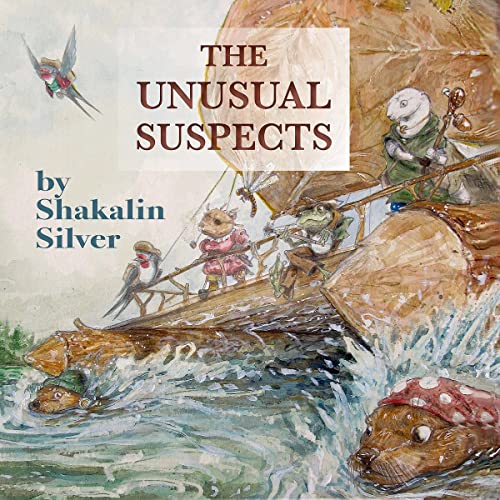 By: Shakalin Silver
Narrated by: Alan Turton
Try for £0.00

Each and every year, the Sprin’ Bor came. It was the wave of water that flooded downriver, marking the end of winter and the beginning of spring. But this year, it was late!

The panic among the creatures of White Waters Chase was just simmering away quietly, until one day, it reaches boiling point when an immigrant ferret, known by the name of Percy Polecat (though he prefers the name Black Paw), opens his big mouth.

Within a matter of hours, Percy’s been arrested and tried on trumped-up charges, escaping a death sentence in the sudden confusion that followed a famous religious prophecy coming to pass.

Now fleeing for his little life, he finds himself heading upriver on a stolen cargo-raft in an epic little quest to find out what’s happened to the Sprin’ Bor and clear his name before the Overlord of White Waters Chase catches him.

Aided and abetted along the way by a one-legged old river rat called Long Joan Silvia, her crew of otters, and his three friends—a pair of young swallows by the names of Sammie and Sarah, and a semi-mute busking toad called Pete.

In a desperate race against time to find answers, they must face many dangers, as it's not just the Overlord and the Riverwatch that they need to be wary of. Who is this mysterious hooded figure of an almost jet-black polecat that seems to be following their every move?

Percy and his friends can be sure of only one thing. Whatever the outcome, it wasn’t just their little lives that would be changed forever; their entire civilization was about to receive a rather nasty enema from the almighty!

What listeners say about The Unusual Suspects