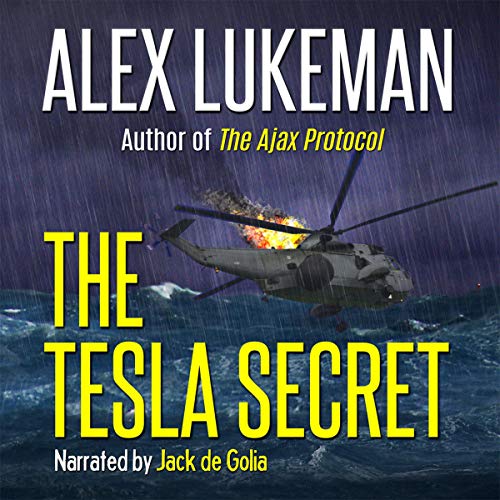 Plans for a devastating weapon invented by Nikola Tesla fall into the hands of a centuries-old conspiracy bent on world domination. Powerful men will stop at nothing to use the weapon to achieve their goal, even at the risk of nuclear war.

Nick Carter works for the Project, the shadow hand of the US President. Selena Connor is his teammate and lover. Their relationship is tested to the breaking point as they are forced to question their commitment to other and to the violent life they have chosen.

From the streets of Prague to the jungles of Mexico, from the hills of Tuscany to the plains of Eastern Russia, the story moves with relentless pace toward a final, explosive confrontation.

"With his gravelly voice, narrator Jack de Golia brings vocal grit to the ongoing battle between the forces of good and a centuries-old conspiracy of wannabe overlords. The battle-hardened professional warriors of the Project find themselves facing an uphill struggle against the power-hungry members of Ion, who plan to develop a death ray to take over the world. De Golia ably supplies the gruff, clipped tones of the men in this testosterone-laden narrative and creates believable female voices as well. Thanks to de Golia's pacing and Lukeman's story, the action keeps hurtling along in this fun production." (D.E.M. © AudioFile 2015, Portland, Maine, published: January 2015)

What listeners say about The Tesla Secret

Echoes of 007, fast and believable. Recommended.

Well, I have listened to the whole series so far and look forward to the rest of the books. This is as good as the others. It is fast paced, never a dull moment. Although it is a standalone book, it is good to appreciate the development of the characters and the storyline from the beginning. This particular story was interesting due to the links with actual possibilities in science. There is a small amount of romance in it but it takes a back seat to the action, which has echoes of 007.
The narrator was as good as ever. He is well suited for this series of books.
Highly recommended to anyone. To get the full impact it is best to start at book 1 'White Jade' but it will not detract from this book if you start here.

This is obviously one in a series, although it stands very well on its own. It is the first Alex Lukeman I have read. It has plenty of action and a good plot. Imagine a weapon that can eliminate the atomic structure (the glue) that holds an object together, effectively vaporizing that object as if it never were. Now imagine a world-wide, albeit small, group of men, working on such a weapon, very close to completion, who are seeking to control the world. Such is the nature of the nemesis of this tale. While such a weapon has not yet reached fruition, the physics to support it is there. This could be a foretelling of our future. This is a good, solid story. 4 stars.

As an Ellectrical Engineer I have always admired Tesla. He was a genius. This book does no harm to his legendary creativity. It is well worth reading. It is read well. I can't find any significant criticism to offer.

What did you love best about The Tesla Secret?

It never slows down

What other book might you compare The Tesla Secret to and why?

It used to be Nick but I am growing fond of Ronnie and now that things have transpired around Selena I can mostly relate to her.

loved this book. I can't wait to start the next one. I couldn't stop listening!

Where does The Tesla Secret rank among all the audiobooks you’ve listened to so far?

This ranks among the better audio books I've listened to. It was old-fashioned fun, fast, edge-of-your seat entertainment.

What about Jack de Golia’s performance did you like?

He seemed to be enjoying himself, which only added to the enjoyment of the listener. In particular, I liked how he would give the "bad guys" evil James Bond villain voices, like he was really having fun with it.

Excellent adventure series book 5. Nick is charged with stopping the world from being reduced to nothing by Teslas secret ray gun.He and Selena need to get past her injuries and who blames whom. Jack de Golia was a terrific narrator.I was given this free review copy audiobook at my request and have voluntarily left this review.

Narration by Jack gives so much added details to the plot. As well as the author’s writing, they draw one in, well done. Given audio for my voluntary review and my honest opinion

Just finished the fifth of this series, and it still feels fresh and exciting. The bad guys get their comeuppance, the good guys prevail, paying some cost, and the world spins another day. In all the books so far, the premise has been interesting. Looking forward to #6!

Alex Lukeman's "The Project" series is an outstanding work of art. Each book has been edge of the seat action with extensive detail given to character development and the plot of every story. Don't miss this one.

Action for the faint of heart, perhaps

Big on coincidence and laid back luck and low on excitement and danger, this team of 'save the world' people are like Indiana Jones...if he were an actuary instead of an adventurer. Nothing deep, no great attachment to any characters but a decent enough listen for a daily commute when you don't feel like focusing too hard on a plot.