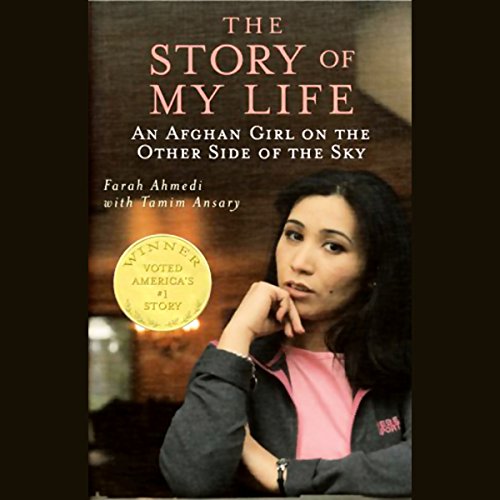 The Story of My Life

By: Farah Ahmedi,Tamim Ansary
Narrated by: Masuda Sultan
Try for £0.00

When ABC News' Good Morning America asked its viewers to write essays describing true-life experiences, the network never imagined receiving more than 20,000 pages of inspiring stories. After a panel of best-selling authors and editors chose three finalists, America was given the opportunity to vote on which aspiring author's story would be published. This audiobook is the result of the most ambitious search ever conducted to publish an extraordinary life story.

Farah Ahmedi is born into the world just as the war between the mujahadeen and the Soviets reaches its peak in Afghanistan. Bombs are falling all over her country, and her native Kabul is swelling with thousands of people looking for homes and jobs. When Farah steps on a land mine on her way to school, her world becomes much smaller than the dreams and hopes of her heart.

The Story of My Life: An Afghan Girl on the Other Side of the Sky recounts an epic journey. It deftly interweaves a childhood in Afghanistan, where the classrooms are naked chambers with only chalkboards on the walls, with an American adolescence, where teenagers struggle to decide whether to try out for school plays and where to go to college.

Thanks to a number of good people who crossed her path at critical moments, Farah is thriving. She is actively enjoying the realization of her childhood dreams. Farah is living proof that not only can the human heart endure, it can also thrive. The Story of My Life is our new great American memoir.

"In a certain sense, the world's most literate reality show." ( Los Angeles Times)

What listeners say about The Story of My Life

A deeply moving and inspirational story. So glad I read it. In these times we need to understand the struggles people go through to escape a war-torn country that was once home. Farah Ahmedi you are an extraordinary person and I hope you keep following your dreams and never give up. Your story, although you unique to you, you were also telling the story of thousands who do not have a voice but share your struggle.

A simple story that renews your faith in the kindness of strangers and reminds you to be thankful of your own good fortunes.

I thoroughly enjoyed reading about this brave, independent young woman. It gave me a better view of how life was in Kabul and what life is like for children living amongst war. One cannot help but like and admire Farah. I always ask myself whether a book would be better to read or listen to. The advantage of listening to this book is hearing the narrator's pronounciation of afghan words.

I HAVE JUST FINISHED LISTENING TO THE STORY OR MY LIFE. IT IS A WARM, REFRESHING STORY THAT LETS THE READER SEE THE WONDERFUL HEART OF THIS GIRL. LAST APRIL I VISITED KABUL WHICH GAVE ME A HEIGHTENED AWARENESS OF THE SUFFERING OF THE PEOPLE OF AFGHANISTAN. THIS GIRL'S HONESTY, DETERMINATION AND LOVING SPIRIT MAKE THIS STORY A WONDERFUL INSPIRATION TO EVERYONE.

You can't hear this story and not be touched. It's honestly written and beautifully read. I felt as if I got to know Farah personally and felt her pain and joy as she struggled to do more with her life than just survive. An amazing story.

I used the download with my high school reading class. The only problem was that this was an abridged edition and our paperback book wasn't. Although it was a little confusing keeping track while following along, we managed and everyone enjoyed the book. A very inspirational story of this girl's determination to overcome adverse conditions. It gave us all a new understanding of conditions and customs in Afghanistan, as well as the efforts of organizations such as World Relief.

This was such an inspiring story. Read it!

I found this story touching and inspiring. I was writing a short story on landmines and came across this book for inspiration. I really enjoyed it.

What an awesome book!

This book was an awesome read! The woman that narrated this book should win some kind of award she was great! I definitely think that I will start listening to audiobooks because of this book.