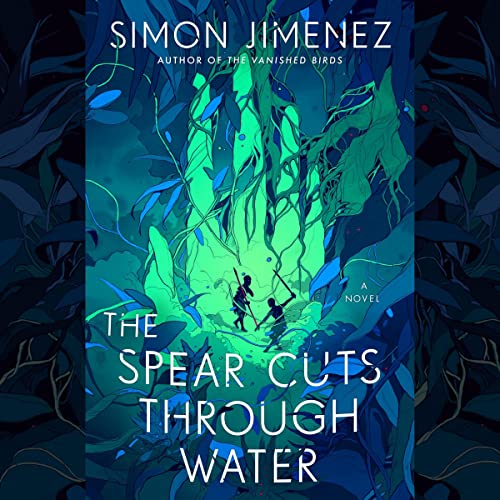 The Spear Cuts Through Water

Two warriors shepherd an ancient god across a broken land to end the tyrannical reign of a royal family in this new epic fantasy from the author of The Vanished Birds.

“A beguiling fantasy not to be missed.”—Evelyn Skye, New York Times bestselling author of The Crown’s Game

ONE OF THE MOST ANTICIPATED BOOKS OF 2022—Tordotcom, BookPage, LitHub

The people suffer under the centuries-long rule of the Moon Throne. The royal family—the despotic emperor and his monstrous sons, the Three Terrors—hold the countryside in their choking grip. They bleed the land and oppress the citizens with the frightful powers they inherited from the god locked under their palace.

But that god cannot be contained forever.

With the aid of Jun, a guard broken by his guilt-stricken past, and Keema, an outcast fighting for his future, the god escapes from her royal captivity and flees from her own children, the triplet Terrors who would drag her back to her unholy prison. And so it is that she embarks with her young companions on a five-day pilgrimage in search of freedom—and a way to end the Moon Throne forever. The journey ahead will be more dangerous than any of them could have imagined.

Both a sweeping adventure story and an intimate exploration of identity, legacy, and belonging, The Spear Cuts Through Water is an ambitious and profound saga that will transport and transform you—and is like nothing you’ve ever listened to before.

“The Spear Cuts Through Water is remarkably rich. . . . This novel is an astonishing feat, one that lovers of sophisticated story won’t want to miss.”—Chicago Review of Books

“A rich and sophisticated voice emerging to transform the genre . . . Jimenez has herewith delivered something utterly individual. . . . A wild chase and odyssey (compressed into five days) which you must read to believe.”—Locus

“Drawing on staples of traditional fantasy such as reluctant, mismatched heroes on a quest, The Spear Cuts Through Water subverts expectations with its language, point of view, and narrative choices. Readers looking for self-aware fantasy with folkloric overtones and the sensibilities of an epic poem—look no further. Jimenez’s novel is an intricate, multilayered story speaking in multiple tongues at once. Fans of diverse, nuanced epics like Black Sun and the Broken Earth series will find this worth their while.”—Suyi Davies Okungbowa, author of Son of the Storm

What listeners say about The Spear Cuts Through Water

unlike anything i've read before

the way this book is wrote is an absolute masterpiece i have no clue how simon jimenez managed to weave together 2 time periods, characters, povs and first, second AND third perspective all together.

this might be confusing for some as the changes in perspective aren't defined and they all flowed into each other but for me jeol de la fuente did such an amazing job with his narration each shift in pov and timeline was very distinct. i love our main two characters and how complex and flawed they were, their relationship was very interesting to see develop! even the second person pov had me gripped, it was such an intimate way tell someone's life story by putting you literally in their shoes.

i did see from other reviews how 'creative' and weird this book is and honestly i was soo into it, like it does go quite crazy at times but i loved that it didnt shy away from those sections of the story. it's definitely not for everyone but it's my favourite book of the year.

Don't know how I'll be able to move to other books now. This was an incredible book: original both in the story and the way it's written.

This novel is my favourite fantasy of 2022. Hugely ambitious with a brilliant structure, great characters and a wonderful story.

I was working whilst listening, and missed so much, but half way through stared to listen properly and wished I’d paid more attention, an amazing and beautiful tale, will listen again sometime

This is why I read

The worst thing about Simon Jimenez is that I came upon the author when he only had one book under his belt and now have to wait an indeterminate amount of time to read his third novel!

This one reminds me of Neuromancer in that it took 50 to 100 pages to understand the framework of the narrative & the world that it is taking place in, but once you do it becomes incredibly rewarding.

The story is unique, inventive, magical and unpredictable. It reads and feels a bit like a (much) more mature Studio Ghibli. The action is thrilling and plentiful, and the characters, very much like in Jimenez' other novel The Vanished Birds, are incredibly endearing.

This has a consistent feel and voice to The Vanished Birds, yet the setting and events are so distinct - I can't wait to see what direction this author goes in next.
Excellent narrator.

i don't know how else to say but THE SPEAR CUTS THROUGH WATER changed my DNA. this book touched my soul. it chewed me up and spit me out. it's transcendent. i've never read ANYTHING as unique and as perfect as this book. i feel like i'm grieving. i don't even know how to explain this book to a stranger. it's not going to be for everyone but i encourage you to try this if you want to read something tender yet ABSOLUTELY BONKERS. THIS BOOL DESERVES TO BE IN YHE LOUVRE. ok i'm done now. brb going to lie down in a state of eternal melancholy

With 3hours to left…

WHAT A GEM! I’m not quite finished yet but I feel compelled to share my thoughts.

What stands out to me most about this book is that it is written in the second person perspective.

Maybe it’s uncommon to find books written in second person or maybe I am not well enough read to have encountered it before but I must say this writing style choice is both irritating (unfamiliar?) and powerfully enthralling. Jimenez places you right in the thick of his intricately woven and absolutely spellbinding story by using this ‘trick’ of second person POV. Even though I found the POV style initially difficult to appreciate, I can see now how it created the wonderful experience of feeling fully immersed in the story. And eventually it just faded to the background and I stopped noticing the unfamiliar second person perspective. If, like me, you are unacquainted with books written in this point of view, you might find it difficult to get into this book at first but don’t let it phase you! Stick with it and you will be rewarded! At least as far as I have read to this point =]

Utterly gorgeous prose. Jimenez shifts POV and time and place so smoothly. I have never read a book written in this manner before and it works brilliantly. Fantastic narration too, highly recommended!

Absolutely magnificent writing. Stories within stories within perspectives. Somehow both dryly historical in nature and yet emotionally rich, grounded in a humanity as plain and simple as you could think. An incredible writing accomplishment.

I absolutely loved the concept and the way this story was told. I did have some trouble connecting to the characters in a lot of places but definitely worth listening to.

I just read a masterful price of art

I don’t think I have ever read a story structured like this before, probably with good reason, but this was written so well. Good stuff.

First half of this book is great. The second half is just yeah author is trying to fill the word count. I felt as though there were a purpose in the first half, and he lost that purpose in second.

Confusing 1st hour, then I was hooked. Beware of some grizzly gruesome details though. I couldn't stop listening. The narrator was excellent.

The Greatest Book Ever Written

Simply, and fantastically, the Greatest Book Ever Written. 10/10. I can’t wait to listen to it again.