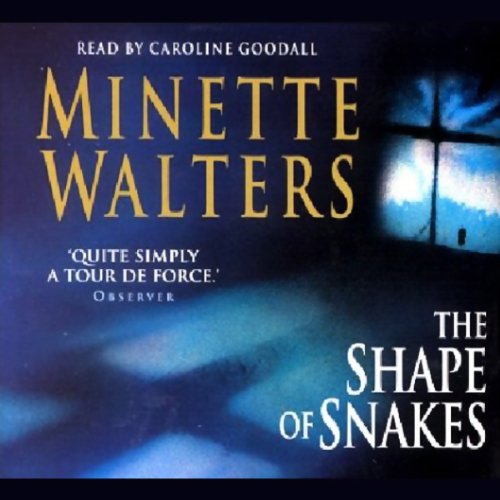 The Shape of Snakes

By: Minette Walters
Narrated by: Caroline Goodall
Try for £0.00

November 1978. Britain is on strike. The dead lie unburied, rubbish piles in the streets, and somewhere in West London a black woman dies in a rain-soaked gutter. Her passing would go unmourned but for the young woman who finds her and who believes, apparently against reason, that Annie was murdered, for the police record the death as a simple traffic accident.

But whatever the truth about Annie - whether she was mad, as her neighbours claimed, or whether she lived in squalor, as the police said, or whether she cruelly mistreated the cats found starving in her house - something passed between her and Mrs. Ranelagh in the moment of death. Something that binds this woman to her cause for the next 20 years.

But why is Mrs. Ranelagh so convinced it was murder when, by her own account, Annie died without speaking? Why does the subject make her husband so angry that he refuses to talk about what happened that night? And why would any woman spend 20 painstaking years uncovering the truth - unless her reasons are personal?

What listeners say about The Shape of Snakes

My first read of Walters and had to have the audio

loved it just like the first time indeed this 13 years ago. My first Minette Walters given to me and i fell in love. I own most of her books and having the audio is great because I can listen with ease.
this is a brilliant story kept me hooked. brilliant twists as always. just get it.

Abridged version not as good

This is an amazing book and having read the original in full I was eager to listen to it. However, there is only this unabridged version available at the moment. Although it captures the essence of the original it lacks a lot of detail which is essential to follow this story properly.