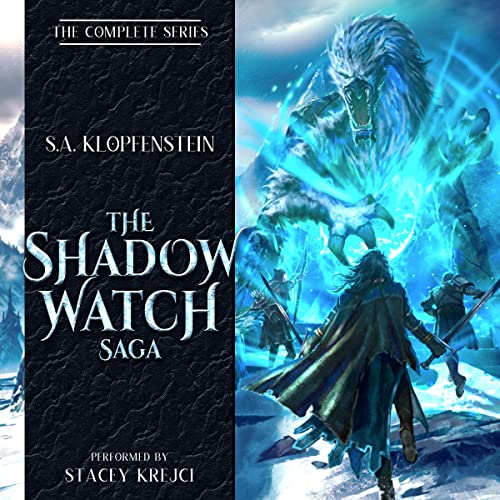 By: S.A. Klopfenstein
Narrated by: Stacey Krejci
Try for £0.00

The world was once ruled by magic and monsters, but after a cataclysmic war, the chancellors of old eradicated these curses and ushered in a New World. One where sorcerers are hunted, and lowborns are sent to their deaths fighting the wars of nobles.

In this world, a young slave reveals magical power before an empire. This revelation may be enough to spark a revolution, if Tori can escape the magic hunters pursuing her.

An idealistic soldier fights to maintain his soul in the infamous Night Legions, but as Darien begins to show promise, the lure of power threatens to turn him into the type of monster he once despised.

And a lordling rebel with a dark past journeys to a turbulent nation in search of a mythic weapon. Kale is soon thrust into a game of power that could upend the world.

As sorcerers rise and monsters rage, the fate of all hangs in the balance.

Will magic save the world or bring it to ruin?

Filled with complex characters, wild plot twists, and epic battles, the Shadow Watch series is perfect for fans of Wheel of Time and the Shannara Chronicles.

Welcome to the breathtaking world of the Shadow Watch, where sorcerers are hunted, monsters rise out of myth, and the fate of all hangs on love and betrayal. Start the four-book series now!

What listeners say about The Shadow Watch Saga

I loved this series. I had to get used to the Narrator but once I got into the story I thought he was really good.
The writing was interesting and the characters were well done.

If you asked me to tell you what happened in this book. I could not, but I can tell you that every time I listened to it I was spirited away into another realm and it was pure magic. I felt the characters betrayal, their celebrations, their frustrations and it was amazing. Beautifully written, narrated phenomenally. You won’t be disappointed.

This entire series was a wonderful discovery and I'm so glad I somehow ended up on the author's mailing list, or this series may not have crossed my radar. I really do think that this is an underrated and under-recognized series and on the surface might be considered a typical YA fantasy, but by the time I got to the second book, I knew it was so much more than that. The world-building is very complex and imaginative, both in the setting and in the inhabitants of the many worlds. The characters are well-fleshed out and they each have their strengths and flaws. Motivations and loyalties are constantly being tested and alliances are made even with your worst enemy. And as much as you hate it sometimes, you feel like each person is making the best choice they can at that moment.

The first book was a great introduction to this world and our main characters. The second book lifted the series to a higher level. The third book was absolutely intense and dark and had me on the edge of my seat. This one was the same until I got to the end and I actually yelled out loud with a "What? How can you end like this?!" I was in the car when this happened and I was actually upset by how the ending left me hanging. I just wanted one sentence. One. But once I got the car parked, I went back and reread the ending and I realized that it actually leaves you with a lot of hope and I am not quite so annoyed, lol. If anything, it makes me excited for a possible continuation of this world as I would love to see how those left in charge work to create a new world. But yeah, I also want Tori to find harmony and peace within herself and Alyck by her side and they work together to build a wonderful life together for themselves and for their community.

I wanted to add that I thought Stacey Krejci did a great job on the audio with certain voices being instantly recognizable (like Cyrus Maru). It ended up adding to my enjoyment of the series, although there were times I needed to go back and relisten to a passage because I got lost in what was happening. This usually happened when I wasn't reading along.

This amazing series is a hidden gem and it is one that I will likely read again in the future. If Stephen Klopfenstein is reading this, I hope he will consider writing a sequel series to this one.

just couldn't get into it

Has all the elements to be a great story, they just never came together

I really wanted to love this book and I listed for several hours before giving up. The narration had so much base in the voice it hurt my ears, I even changed it on my radio but it was still too much paralleled with the volume kept going quiet and then loud so I had to keep changing the volume. I couldn’t get into the story line for this reason.

Great start, lost in the middle, coast to the end

Wow. First book set up the character was done very well. Girl and boy in hard times of slavery in a magic hunting society being persecuted by the upper class. Second book had more introductions of characters to add more to the story. Third book introduces more characters and double /triple crossing with an unkillable foe. Lost of magic, regain of new magic. It was hard to get through the series with the numerous plot twists that became unfollowable.

Not that is series is bad, but the story became implausible.

The storyline was a little slow in places but I liked everything except some of the voices the narrator used.