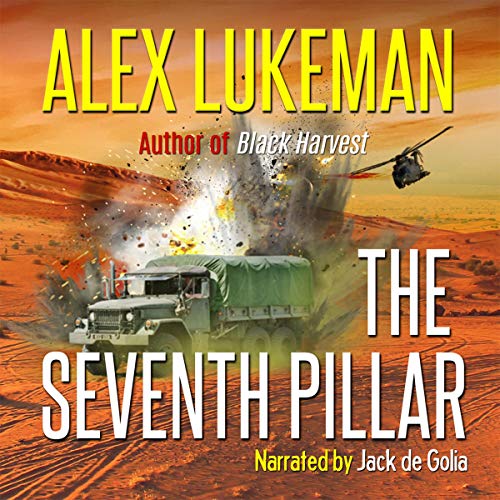 A fanatical terrorist has visions of the Islamic Mahdi commanding him to begin the Apocalypse and bring about the End of Days. An ancient brotherhood of assassins hidden for centuries reappears to murder and ignite the fires of war. A truck carrying a terrible weapon leaves Sudan for the lawless mountains of Algeria and an unknown destination.

Director Elizabeth Harker of the Project sends Nick Carter and Selena Connorto to the burning wastelands of Western Africa, the back streets of San Diego and the bitter mountains of the Hindu Kush, before a final confrontation that will decide the future of Western civilization.

What listeners say about The Seventh Pillar

Another fast paced story. It was like watching a Mission Impossible movie - nothing too deep but plenty of action. There is a little love interest but it doesn't consume the story, it really is all about the plot. This book took some time to get into the psyche of the main characters so there is some depth there. You can't help but root for the whole team. It is a standalone story but I am enjoying following the series and am pleased there are plenty more to come. Basically, if you like Mission Impossible etc you will really enjoy these stories and it is worth the outlay.
The narrator has a good voice for this, I always feel his women's voices a little difficult but it doesn't detract from the story at all, other voices are great.
Highly recommended.

I’ve listened to book three and book six in the series, the other being “The Nostradamus Files” and I really like them both. They can be listened to as stand alone audiobooks but I would like to listen to the whole series. The stories are good and adventurous and easy to follow.

The British Foreign Secretary is found assassinated in London with a sign on him, an ambigram in Arabic writing. This begins Nick Carter and Selena Conner’s journey through the rough terrain of the Sahara desert. They’re sent to Timbuktu in Western Africa where they encounter a terror cell while searching for hidden artifacts in a cave in the Algerian mountains. They find much more than they intended after being warned in advance by a few people aren’t who they appear to be.

I like these books because they stay with the subject. They’re interesting and keep the listener’s attention with some good twists, good plots, and likeable characters. There’s no deep involvement but rather, exciting perils. I would recommend any of these books for a good conspiracy adventure.

About the narrator: Jack de Golia is perfect in these books. He has a good middle of the road sound. He’s able to differentiate the character’s voices so that the listener always knows whose speaking. He also keeps the story moving at a steady pace.

Audiobook gifted in exchange for review.

The Elite op group have their next assignment, a British Secretary was murder, the symbols left on the body are what. Part of the team are injured and the others are once again trotting across the globe, hunting for the assissins. Given audio for my voluntary review and my honest opinion

Nick Carter novel; similar to Pike Logan type government black ops group (but not as good IMO). Not a bad story, interesting, but the writing is not as suspenseful, detailed, or complex to some degree. To me, the writing seems simpler but still interesting and exciting. The characters are good and well developed. I hesitate at four stars, but this particular volume is better than three.point.five.

Third is another charm.

I'm hooked on this series. Good writing, Jack the reader does a great job bringing the characters to life, and the plot could be ripped from today's headlines.

A fast paced action thriller!I enjoyed it.Jack de Golia was a fine narrator.I was given this free review copy audiobook at my request and have voluntarily left this review.'

Action And Suspense Throughout

Alex Lukeman has a hit on his hands with this series. Fascinating deductive reasoning is the way this team works and their skills are unparalleled. Don't miss this series.

Would you listen to The Seventh Pillar again? Why?

Yes narrator made it so enjoyable

What other book might you compare The Seventh Pillar to and why?

Yes if only I could