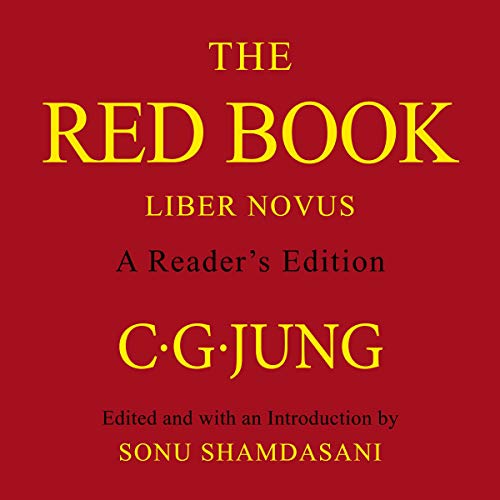 The Red Book: A Reader's Edition

UPDATE: In response to listener feedback, this audio edition of The Red Book has now been revised to exclude footnotes in the reading.

An audio edition of the famous Red Book text and essay.

The Red Book, published to wide acclaim in 2009, contains the nucleus of C. G. Jung's later works. It was here that he developed his principal theories of the archetypes, the collective unconscious, and the process of individuation that would transform psychotherapy from treatment of the sick into a means for the higher development of the personality.

As Sara Corbett wrote in the New York Times, "The creation of one of modern history's true visionaries, The Red Book is a singular work, outside of categorization. As an inquiry into what it means to be human, it transcends the history of psychoanalysis and underscores Jung's place among revolutionary thinkers like Marx, Orwell and, of course, Freud."

The Red Book: A Reader's Edition features Sonu Shamdasani's introductory essay and the full translation of Jung's vital work in one audiobook. The Red Book is skillfully narrated by Mike Fraser.

What listeners say about The Red Book: A Reader's Edition

This review is not of Jungs Red Book but of this particular audio edition. DO NOT BUY IT--the writing is constantly interupted by full reading of footnotes. As a result it is impossible for the listener to immerse herself in Jungs text. It boggles my mind that the audiobook was executed like this.

This performance is not good enough. Jung's fascinating text is impossible to engage with through this recording in which the reader often stumbles over his words, interrupts the flow of thought by reading out the footnotes and mispronounces German references so that they become unrecognisable. What a missed opportunity! How could this happen?

Really happy that they have finally made an audiobook of the Red Book! I think the narrator does a really good job and has a more expressive voice than most audiobook narrators I’ve heard. However, I think it is a bit of a missed opportunity not to have it read by a narrator with a Swiss accent like Jung’s. That would have really added something.

I have to agree with others reviewers here that they should have left out the footnotes in the audiobook version - they really break up the flow of the main text. Perhaps the publisher could release an alternative version without footnotes?

Overall - it’s awesome that they have made this audiobook and I hope there is more to come from this publisher (black books etc).

Update 05/07/21: Impressed that the publisher listened to the feedback regarding the footnotes. Just listened to the new updated version with them removed - so much better. You can now get fully immersed in the reading and it flows beautifully. Good work.

Classic Jung - a bit of a maze, and stuttering at times, but nevertheless a vital piece of psychological thought.

This is the best book ever.

For those who love C.G Jung and psychology and psychoanalysis this is a must.

The earlier negative reviews for this audio work are based on the fact the footnotes were originally included. It has now been updated with the footnotes removed. Despite having not heard the original, I think that was the correct decision.
The footnotes are a wonderful resource in the printed editions, but I don’t imagine they would make for a good listening experience.
If you want the footnotes you can get the Reader’s Edition or the full facsimile version.
If you want to have this excellent work read to you, then I think this version is flawless.

Jung's family.. thank you so much for letting this be shared with all of us.

The narration is perfect. I would highly recommend this edition. The complexity of the work will require repeated relistens, but this will be with pleasure as the narration is so good. Listen in a dark room with no distractions!

The alchemy of a mind, insightful and personal to the author.

The book wasn’t, what I thought it would be. It is full of allegory and, subliminal self reflection. The mode of the book is one of a crusade into strings of awareness and, realisation.
It’s done in steps with reference to mythology from across the globe the and, cultural aspects of awareness. Geek mythical gods, female priestess / gods of knowledge are present and, man are present that of the self and his thirst of knowledge.
It reminds me of a play broken into Acts.

I was looking forward to this - but my goodness, the narration is dull! Uninspired, lacklustre and delivered in a monotone with hardly any inflection. Seriously, the narrator might as well be reading a telephone directory - he patently has no interest in the material. Such a pity that such a profound text was given this poor treatment. What were they thinking? Could they not book a replacement narrator in time?

Put the footnotes in a PDF with timestamps

There's more footnotes than there is book content and for some reason, they thought it would be a good idea to have the narrator include ALL of them while reading the actual book. Footnote, blah blah blah, end footnote. The problem with this is you can't follow along with the actual content of the book and what Jung was trying to express without 5-10 footnotes before, during, and after every paragraph.

Audible: As a best practice, have the footnotes be in a PDF companion with a timestamp. Why? Because 90-95% of us don't care AT ALL about the footnotes.

I'll still finish this book because I'm trying to figure myself out and have tremendous respect for Jung, but I might kill myself before finishing it because I'll be going mad from all the "footnote" references.

REVISED EDITION--FOOTNOTES HAVE BEEN REMOVED

Apparently the producers have, in response to the feedback, removed the footnotes.
I am very grateful for this. I listened to a sample a few months back that included the footnotes and decided not to purchase the book at that time. I found listening to Jung's personal visionary journey in that format much too stressful.

This new revised edition is wonderful and offers the delight that I originally hoped for.

DO NOT SPEND YOUR MONEY ON THIS!

I was so excited about this book but there's no way to keep track with the constant interruptions of the footnotes, I do not know if the book is being read or the footnotes, is so confusing! DO NOT BUY IT!

Were I not familiar with Jung as a serious, rational, scientific mind; and but for the second layer unpacking of each of the bizarre and seemingly random entries, I would have thought this to be the work of a madman.

I strongly suggest reading as much of Jung’s straightforward psychological writing as you can to prepare yourself for the deluge of seemingly disjointed archetypal imagery presented herein. I’ve read a lot, and I found myself bouncing off and skittering over several sections.

CG Jung was an absolute madlad, and this book is his detailed account of what happens when then abyss stares back at you, and you don’t blink.

This is NOT Jung's Red Book!

This book is such a disappointment. It's 25 hours of Shamadasani rambling on about Jung, and precious little of Jung himself. I had hoped to listen to Jung's actual Liber Novis - this is not it!

The reality is, I get so disconnected from what he is saying when ever 20 seconds he reads a footnote about what ever is on page of something I really don’t care. It makes it very difficult as an average minded person to stay intrigued by the book.

not meant for audio format

while there is a wealth of content in this book, the constant back and forth the narrator has to do between the content and the accompanying footnotes is very distracting and takes the continuity of thought away annoyingly as you gain traction to the cadence of the narrators voice.

I am still working through the thoughts and ideas this book has brought me to. My soul is very grateful for the encouragement to bring requital, and I feel a definite upgrade as to how well I know and understand myself. Thank you Carl for undertaking what must have been a challenging journey with little available guidance

I could listen to these at least once a month, it is just that good...

Too Clunky of a read.

The speaker interrupts the flow every few seconds to read a footnote or citation. It made it really difficult to track the content of the book.