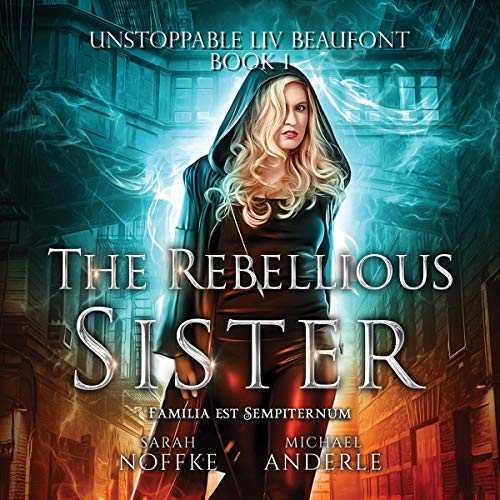 By: Sarah Noffke,Michael Anderle
Narrated by: Dara Rosenberg
Try for £0.00

Olivia Beaufont likes fixing things and keeping to herself. She’s simple like that - but her life is about to drastically change.

Liv is a rebel with royal blood who abdicated her birthright. A string of murders changes everything and the House of Seven asks her to take on a role as a Warrior, one of seven positions revered for protecting magic.

Although Liv would rather stay out of the politics and conspiracies that she ran away from years ago, her family needs her. It’s only a 12-year stint until her sister, the next in line, can take over.

So, what’s the harm in activating her magic and accepting her place as a warrior?

Justice hasn’t been properly served by the House of Seven in a long time.

What listeners say about The Rebellious Sister

Small confession before the review - I have bought all 12 of the Liv Beafont books on Kindle and haven't read them yet due to having so many other books in my queue to read......

Liv lives above the shop she works in and has a talking cat (Plato) for a companion.

One night, her brother Clarke appears and tells her that her older brother and sister are dead and she's next in the family line to become a Warrior for the House of Seven - but she abdicated her position 5 years prior after her parents were murdered.

Clarke takes her to the House of Seven and she reluctantly agrees to have her magic unbound - the only problem is, once returned, her magic is a lot stronger than it should be....

Liv refuses to train with the House of Seven - she doesn't trust them - so she turns to Rory, a giant, to train her.

Liv thinks outside of the box and questions everything the council tell her, much to their dismay. She is sassy and brave and will do things her way.

I found this book to be really enjoyable, and the narrator, Dara Rosenberg, is superb at telling the story.

I will definitely jump the series of books up my kindle reading list and will also be buying the next audio book when it releases later on this month.

Big thumbs up to Sarah Noffke for bringing us a true sassy warrior with a great tale to tell..

This was a mesmerizing read! I fell in love with the characters immediately and cannot wait for the second book! This book was full of snark and action from beginning to end. Liv is a bad@$$ and Plato was an instant favorite.

The narrator used a variety of different tones which helped keep the characters clear, the intonation was kept consistent. Excellent book to listen to.

Oh holy cow what a very good book. This is a first read/listen by both these author's and I've been missing out. The world created is fantastic it's set in the human world with other beings in it. Mages, giants, trolls, etc and humans don't know about magic. The characters are well thought out and show great promise in books to come. There is a bit of mystery and laughs. Liv is very out spoken, smart and sassy, I couldn't put this book down. Here's a funny thing the narration is done by my favorite narrator Lauren Fortgang but the narrator is Dara Rosenberg hmm they are one in the same. Rosenberg/Fortgang the voices are done very well and she tells this very well written story with emotion and the smoothness to her voice will suck you in. Highly recommend both author's and narrator don't hesitate you'll love it.

I’m not sure how I feel about this book. It was very confusing. The murder at the beginning are the parents (?) of Liv and Clark but they the guy said it was his sister who was murdered. Their were numerous times when they were referred to as brother and sister but then implied that they were husband and wife. So.... is this family incestous? I’m really confused. Depending on if I have no other options left I may or may not listen to book two. I’m not sure if I can take more confusing.

a magical girl raised by magicals around magical for 17 year but after 5 years away she needs to relearn the basics of the basics of the absolute basics?
if her 8 year old sister didn't have any control over magic, it would be plausible (but still stupid) if the main character needed to learn EVERYTHING again. but said 8 year old seemed to be perfectly capable.

analogy: I've not driven a car in several year... how do I stop going forward? brake? how do I ''brake''?

Lots of great potential that needs better editing. An example from Chapter 28:
She flinched but she didn’t react.

Totally subjective, but this book just didn’t do it for me. So many points were interesting but so much felt a step out of sync to me. Again, editing support.

Why the double murder at the beginning unless it was to create a sense of horror and a level of suspense? Then the horror skewed the banality of the apt scene and Liv seeing Clark for the first time in 5 years and the matter-of-factness of announcing Ian and Reece’s deaths.
If they were so close with their parents they would have had a very close-knit family. The additional deaths would have hit Liv and Clark hard with an added fear to protect their baby sister who is where? With whom? IMO the murders cancelled out any humor and warmth attempted in the following apt scenes. Several emotional disconnects to my perspective.
This is why I started skipping and skimming the remainder of the story. My impression was of a creative mind that should be encouraged with a much more involved but supportive writing group and editor.
I did go back and listened through the whole and I decided to return the audio, but check out book 2 in Kindle Unltd.

Rosenberg has a pleasant voice that registered young to me - more sheltered teenager than worldly 22 who has had to fend for herself for 5 years. Especially in the shady world of fenced goods.
It’s a pet peeve for me that narrators should be as well versed in words as writers. If you’re not familiar with a word look it up in the dictionary. No excuse now they come with audio. TOUR-ists not TORE-ists. Topiary is TOE-pea-air-ee not TOP-ee-air-ee. And I’m stopping here.