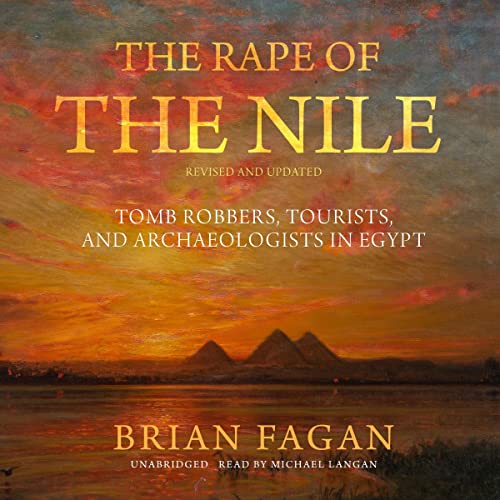 The Rape of the Nile, Revised and Updated

By: Brian Fagan
Narrated by: Michael Langan
Try for £0.00

The scandalous rape of Ancient Egypt is a historical vignette of greed, vanity, and dedicated archaeological research. It is a tale vividly told by renowned archaeology author Brian Fagan, with characters that include the ancient historian Herodotus; Theban tomb robbers; obelisk-stealing Romans; Coptic Christians determined to erase the heretical past; mummy traders; leisured antiquarians; major European museums; Giovanni Belzoni, a circus strongman who removed more antiquities than Napoleon’s armies; shrewd consuls and ruthless pashas; and archaeologists such as Sir Flinders Petrie who changed the course of Egyptology.

This is the first thoroughly revised edition of The Rape of the Nile—Fagan’s classic account of the cavalcade of archaeologists, thieves, and sightseers who have flocked to the Nile Valley since ancient times. Featured in this edition are new accounts of stunning recent discoveries, including the Royal Tombs of Tanis, the Valley of Golden Mummies at Bahariya, the Tomb of the Sons of Ramses, and the sunken city of Alexandria (whose lighthouse was one of the Seven Wonders of the Ancient World). Fagan concludes with a clear-eyed assessment of the impact of modern mass tourism on archaeological sites and artifacts.

What listeners say about The Rape of the Nile, Revised and Updated