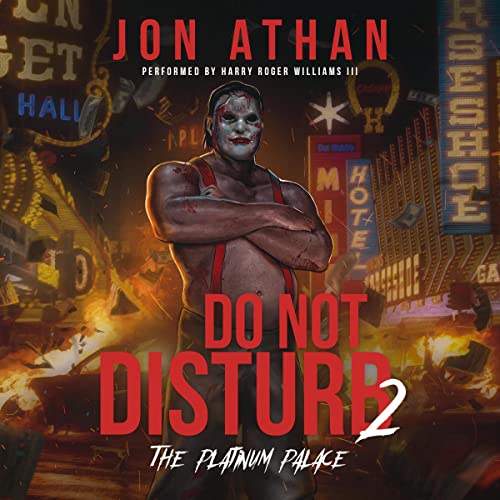 The Platinum Palace (Night of the Killer Clowns)

While patrolling the streets of Las Vegas, Franco Ferraro, a beat cop, is called to a disturbance at the Platinum Palace—a recently opened resort on the Strip. Responding to the call, he discovers the hotel staff has lost control of the resort’s command center. He hears reports of guests screaming in their rooms and clowns wandering the hotel’s halls. Then he hears gunfire and an explosion outside.

Before he knows it, Franco finds himself trapped in the resort without any backup while a series of coordinated terrorist attacks bring the sleepless city of Las Vegas to a standstill. Can Franco survive the night and protect the guests? Or will he become another victim on the night of the killer clowns?

Jon Athan welcomes you to the blood-soaked halls of the Platinum Palace in this highly anticipated sequel to 2020’s hit slasher Do Not Disturb. What happens in Vegas slays in Vegas!

intense is an understatement

always enjoy Jon's books. extreme horror doesn't really cover it. that phrase is used for a lot of books but his live up to it. even though it has a 2 in the title it is a complete story on its own.

another great slasher. I can't wait for the next one. captivating at every turn. Yippie Kaiya Mother...