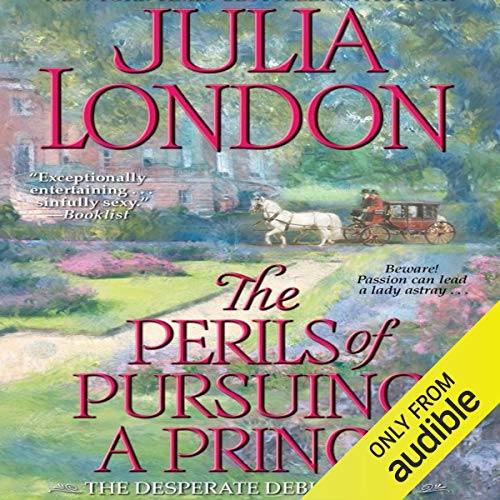 The Perils of Pursuing a Prince

By: Julia London
Narrated by: Anne Flosnik
Try for £0.00

From New York Times best-selling author Julia London comes the second novel in her irresistibly romantic Desperate Debutantes trilogy, in which three suddenly destitute aristocratic young ladies must resort to desperate means to keep up appearances...and find the husbands of their dreams.

Lady Greer Fairchild's only hope of avoiding marriage to the first bidder lies in journeying into the untamed Welsh countryside in search of an inheritance she's not sure even exists -- one reportedly controlled by Rhodrick Glendower, Earl of Radnor, also known as the Prince of Powys. Rumor has it that the prince is rough, ruthless -- even a murderer. But Greer never imagined that the brute would refuse to let her leave his remote castle until she has proven her identity. Or that she would find herself powerfully attracted to this passionately virile man whose gruff demeanor belies a proud and sensual nature. The further Greer falls under his spell, the more determined she becomes to unravel the secrets of her Welsh heritage and the mystery surrounding the dark prince who dares her to become his wife and princess.

What listeners say about The Perils of Pursuing a Prince

Julie London is a very talented author, and although well written the story fell short. There was always the expectation of something going to happen that kept me listening to the end - a mystery to be unveiled.

The heroine was a naive and confused young lady. The hero a powerful man, with low self-esteem.

Ann Flosnik carried the story with her excellent performance.

Got goose bumps listening to the story

This story was so completely different than the other two. I read the first one in the series before jumping to the third and now finally making it back to the second. I feared the stories may resemble one another and so was hesitant in purchasing this book but I am soooooo glad I did. Such a believable tale of love and trust mixed with spirit communication via sleep. Those parts gave me goose bumps since I am a believer. The communication was a very small part of it and happened almost at the very end, nevertheless, if you may find that silly, then don’t purchase this book. Some clarification to the story is given through explanations of spirit communication. Having one’s loved one watching out for you beyond the grave is very heart warming to me. A definite 5 star.

I'm not a big fan of ann Flosnik but she grows on you after a while. She actually does a good job with dramatization and voices, it's the actual articulation and inflection of the words that's unique and takes getting used to. Hard to explain. Anyway... The story. Good development of the characters, heated sex scenes, loved the ghost element in the story. The story did seem a little underdeveloped in that nothing ever happened with the "haunted" house, Percy never gets his due, you don't really feel the characters settle in as a couple...
But I loved the vulnerability of the hero. He was wonderful. The heroine was a perfect counterpart; Vivacious and sunny. Overall foe me it was a solid 4.5. Not the BEST book I've ever read, but very good, entertaining, and worth the time.

Book 1 and the first parts of Book 2 I did get through claim Greer is smart. I do not see any evidence of that at all. She is as naive and dumb as they come in the worst books of the genre. Being a modern woman this annoyed me when the goal was entertainment. Therefore, I couldn’t finish it. But if you don’t mind naive and week female leads have at it.

The Perils of Pursuing a Prince is my first taste of Julia London's writing, as well as my first listen to Anne Flosnik's narration, and I enjoyed both, very much! This is a fun, sexy, romantic story with moments of poignancy that made me want to weep.

I can't wait to read/listen to more!!

Loved the story and Anne Flosnik as she navigates through the story and keeps us riveted. Greer just wants to see if she has an
inheritance so she becomes a companion making her way to Wales. When she gets there not only does she find that her uncle has died but so does her companion. Percy then fill she head with all kinds of lies and they head to Prince of Powys (Earl of Radnor). When they arrive Percy forgets to tell Greer that the Earl is actually his cousin. The Earl believes Greer to be nothing but a conniving person just like Percy. She has to prove herself to him.
When Percy runs off after the Earl pays him, he leaves Greer to fend for herself and prove that she is not who he thinks she is.
A very compelling story with someone with low self-esteem because of his looks and Greer whose beautiful and head strong come together as one with the help of Greer's Mothers Ghost.

I have enjoyed others by the author and in the serious. The lead female is so weak and so easily fooled that I couldn't finish this one

Altho this is the second in the series it does stand alone. However I recommend The Hazards of Hunting a Duke first! This is not a serious book, just as JL never writes... but its enjoyable. I will remember it but probably never be inspired to listen to it again. This is no means the fault of Anne Flosnik who delivered her exacting performance faithfully the same as always. But rather that it is a very typical normal totally as expected HR. No complaints... none at all. and if I hadn't accidently started with book three and then read book one I may never have found this one and am glad that I did.

CREDIT worthy....if you are a Julia London fan then definately yes. Even if you aren't I give it a yes.

HEAT Factor....4 very steamy explicit moments for sure... but not much of the sexual tension that drives some stories.

Pairing Julia London and Anne Flosnik was genius because together they take you on adventures filled with happiness and love. I laugh and cry my way through all their books. This series was a blast and I will be ordering and listening to many more adventures from this dynamic duo.