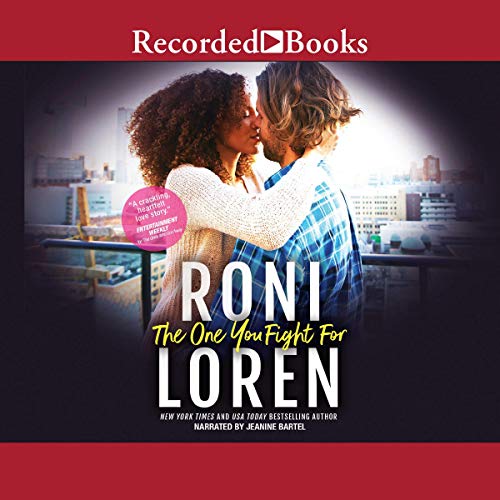 The One You Fight For

By: Roni Loren
Narrated by: Jeanine Bartel
Try for £0.00

How hard would you fight for the one you love?

Taryn Landry was there that awful night 14 years ago when Long Acre changed from the name of a town to the title of a national tragedy. Everyone knows she lost her younger sister. No one knows it was her fault.

Since then, psychology Professor Taryn has dedicated her life's work to preventing something like that from ever happening again. Falling in love was never part of the plan....

Shaw Miller has spent more than a decade dealing with the fallout of his brother's horrific actions. After losing everything - his chance at Olympic gold, his family, almost his sanity - he's changed his name, his look, and he's finally starting a new life. As long as he keeps a low profile and his identity secret, everything will be okay, right?

When the world and everyone you know defines you by one catastrophic tragedy...how do you find your happy ending?

What listeners say about The One You Fight For

Okay could y’all please work a little better on accents. Speaking as someone from South Louisiana I was literally laughing at the way this narrator was murdering the word “Cher”. Or at least check out YouTube to learn how to say it and actually sound as if you are from South Louisiana. And it was hard to differentiate between who was speaking. She sounds the same for some of the characters. The story is wonderful. Narrator/reader subpar.

I enjoyed this one very much. I cant imagine having a relationship with a man who shares the same look around the eyes as the man who murdered my sister. I enjoyed the discussions that the couple had with each other, although I felt that the story could have added some realistic concerns about the couple's plans for the future.

This series has really been such a wonderful rollercoaster of emotions. Four friends who have a horribly tragic past which has brought them together in this beautiful friendship they otherwise probably would never have had. Each woman has her own story to tell. This was Taryns story.

I’m in this cross between Taryns story story being my least favorite so far and my most... if that’s somehow possible?? 😂 Taryn our of the four women kind of bored me with her babbles of research and studies she’s done trying to gain appropriate and crucial research on the hows and whys on school shootings.
However, her personality is kind of fun and quirky and her dedication makes her so admirable.

I found Shaw to originally be so stand off-ish to the point that he almost seemed to lose interest in Taryn every time they were separated. However, as you begin to know Shaw more....you find there’s a whole host of inner demons he is fighting and their relationship complicates this on a whole other level.

Them coming together is beautiful and tragic and just just plain perfection for both characters.

Amazing story. The judgement from characters was harsh, but overall great story. I was upset at how they thought of him. Glad it worked out in the end

This is the third and most poignant in the series. The romance is between a survivor of a school shooting who lost her sister during the event, and the brother of the shooter who was victimized by the press and public opinion. Both are guilt ridden but while she devotes her life to developing a plan to identify and help potential shooters and he has ended up trying to lay low and hide in plain sight. The characters are well developed and the story is well done. There is a lot of emotion and hot scenes but unfortunately the narrator has real problems with her male voices so some of the mood is lost as a result. At times it is hard to determine who is speaking. There wouldn’t have been an issue with an additional male narrator.

Straight from the headlines.... I love how she puts a spotlight on the other side of the aisle.... When something like that happens the media can be monsters. At one point she had me yelling that I hope her a** suffers. This guy was beautiful and I was so sorry that no one before her tapped into him to make him realize what happened was not his fault. When he told her that it was okay to live her life and she had just lost track of time I was in total agreement with him. I loved her friends who were fun, accepting and very real sisters. Her parents should have been ashamed to tell her to lie, they should have known better. What ever happened to tell the truth and shame the devil? Awesome story. great performance, good narrator....