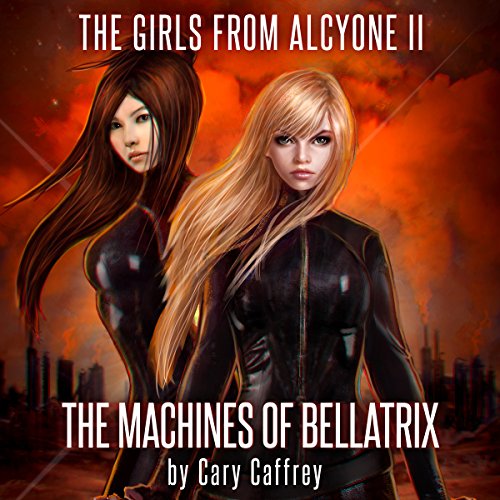 The Machines of Bellatrix

By: Cary Caffrey
Narrated by: Kristin James
Try for £0.00

Suko slid down next to her, her eSMG in her hand. "Whatever we're doing, we better do it fast. Looks like they brought air support."

Sigrid didn't have to look. She could feel the low rumble of the heavy thrusters firing, growing louder. Still kilometers away, two air vehicles were moving quickly toward them. They were gunships, Thunderhawks, and they were moving fast, closing on their position. Quad cannon mounts extended from their sides, swinging into firing positions and taking aim.

They were outnumbered, and the situation was deteriorating quickly. These mercenaries might not be the enemy she was looking for, but they were still men, and they still hunted them.

"If you have a plan," Suko said, her eyes fixed on the incoming gunships, "now's the time to share it."

"Plan?" Sigrid unholstered her sidearms. "We kill them all."

Alcyone is gone. The Independent stronghold on Scorpii is destroyed. Sigrid and her sisters have fled the Federation to make a new home on the remote world of Medea.

But with a price on her head the size of a planet, and pursued across the galaxy by the Council for Trade and Finance, Sigrid knows she and her sisters are not safe. As long as there are those who would seek to control them, hunt them, they will never be safe.

Unless Sigrid can stop them first.

But to stop them, Sigrid must first find them. But how? And where? Her only clue is a mysterious coded message. One that could serve as either warning or invitation. One that will lead Sigrid to a factory world at the very edge of Federation space, and to a deadly confrontation with her most dangerous enemy yet: the machines of Bellatrix.

What listeners say about The Machines of Bellatrix