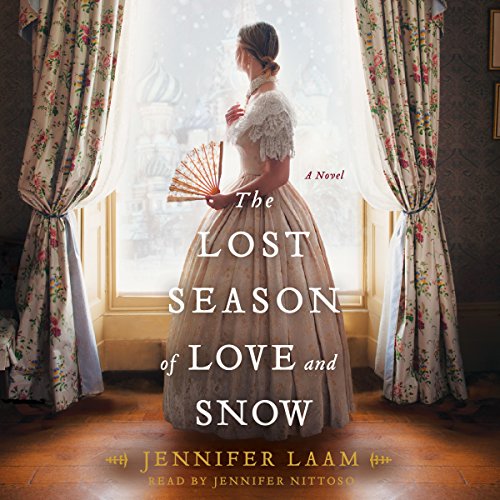 The Lost Season of Love and Snow

"A captivating tale in which Natalya Pushkin is vividly imagined. The dramatic complexities of her personality, and of Imperial Russian society, are cleverly portrayed in this sensitive and skillfully written novel. Sure to enchant those who are already fans of Jennifer Laam, and fans of historical fiction." (Hazel Gaynor, New York Times best-selling author of The Girl Who Came Home)

This audiobook presents listeners with the unforgettable story of Alexander Pushkin's beautiful wife, Natalya, a woman much admired at Court, and how she became reviled as the villain of St. Petersburg.

At the age of 16, Natalya Goncharova is stunningly beautiful and intellectually curious. But while she finds joy in French translations and a history of Russian poetry, her family is more concerned with her marriage prospects. It is only fitting that during the Christmas of 1828 at her first public ball in her hometown of Moscow, she attracts the romantic attention of Russia's most lauded rebel poet: Alexander Pushkin. Enchanted at first sight, Natalya is already a devoted reader of Alexander's serialized novel in verse, Evgeny Onegin. The most recently published chapter ends in a duel, and she is dying to learn what happens next. Finding herself deeply attracted to Alexander's intensity and joie de vivre, Natalya hopes to see him again as soon as possible.

What follows is a courtship and later marriage full of equal parts passion and domestic bliss but also destructive jealousies. When vicious court gossip leads to Alexander dying from injuries earned defending his honor as well as Natalya's in a duel, Natalya finds herself reviled for her alleged role in his death.

With beautiful wording and understanding, Jennifer Laam's compelling new audiobook, The Lost Season of Love and Snow, helps Natalya tell her side of the story - the story of her greatest love and her inner struggle to create a fulfilling life despite the dangerous intrigues of a glamorous imperial Court.

What listeners say about The Lost Season of Love and Snow