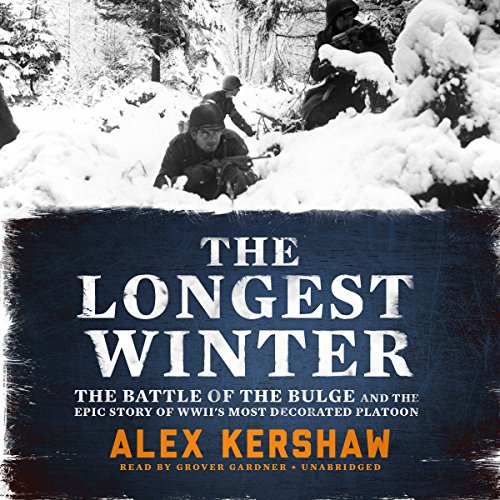 By: Alex Kershaw
Narrated by: Grover Gardner
Try for £0.00

December 1944: Deep in the Ardennes forest, a platoon of 18 men under the command of 20-year-old lieutenant Lyle Bouck huddle in their foxholes. Under attack and vastly outnumbered, they repulse three German assaults in a fierce day-long battle, killing more than 500 Germans.

Only when Bouck's men run out of ammunition do they surrender. As POWs, Bouck's platoon experience an ordeal far worse than combat: trigger-happy German guards, Allied bombing raids, and a daily ration of thin soup. Somehow, the men of Bouck's platoon all miraculously survive.

Alex Kershaw brings to life the story of America's most decorated small unit of the war, and one of the most inspiring stories in American history.

What listeners say about The Longest Winter

An interesting story tarnished with US sentimentality

I thought this was the story of the Battle of the Bulge but more accurately it follows the tale of a single US Platoon who, through a series of unforgivable mistakes suffer quite severely. This would have been very interesting, if still harrowing, but for Kershaw’s slightly ridiculous bias. As a former Army officer, one of the closing statements which was something like “the single greatest tactical manoeuvre of the Second World War” to describe a string of errors and resultant suffering made me laugh out loud!

Such an amazingly detailed account of not just the units famous action, but their 2nd struggle after capture.

This is an excellent and captivatng account of a platoons bonding, war experience and fight for survival in german captivity. Interestning supplements to the story from gernman adversaries. Highly revommended

I have read different accounts of the Battle of the Bulge, generally though only giving passing reference to the heroism displayed by the I&R platoon. So this story was a great way to get a fuller picture of their contribution at the time and how it affected their lives.

Average book which doesn’t do justice

Not to take away from the suffering of the people involved which was horrific, but the story is lengthy and not well told.

Loved the story, the actions of that platoon, info about Joachim Peiper and as always, the brilliant Grover Gardner

A superb account of a small but outstandingly brave group of young men who stood their ground against incredible odds and their subsequent terrible ordeal as POWs. Finally got the recognition they deserved

Well told story from training, battle, to capture, to liberation. An eyeopening account. A must listen to account.

A great retelling of one platoons story. It is incredibly fascinating to hear from the perspective of the platoon in such great detail. I really felt for the first time I partly understood what a POW went through from capture to release.

Thick with jargon of the worst kind and written like tabloid story. We were told the mission to rescue the POWs (am not going to use the Kriegie term} was one of the wars greatest operations. Just that the author failed to give any details.

Author Alex Kershaw is a wonderful storyteller, making you feel right alongside the combatants in the battles. I especially like how he provides perspectives from the other side as well. This particular Kershaw book tells of one particular outfit’s participation in the first few days of the Battle of the Bulge. It starts with their formation and training in the US, their time in the UK before shipping out, and what happens after the Bulge...all in his excellent writing style. But, this book isn’t quite as good as his D-Day book (First Wave) nor his Italian Campaign book (The Liberator), nor for that matter Avenue of Spies or The Few. Those are awesome, this one is very good, just a notch below. The narrator, Grover Gardner, is excellent and a pleasure to listen to. My goal was to listen to this an hour each night before sleep...instead I’ve been bleary-eyed in the mornings from not being able to stop listening. Kershaw is the best of the WWII storytellers, by a mile!

I read this book after playing several different military (board) games modeling various stages of the Battle of the Bulge and thoroughly enjoyed it. It's a riveting account of the heroic deeds of the 99th Infantry Division, critically delaying the 6th Panzer Army (much to Rommel's excessive frustration) and paving the way for the Allies' progress through France.

The story is fantastic. On the first morning of the Battle of the Bulge, a unit of 18 men led by a 20 year old Lieutenant held off an entire German battalion of over 600 men during a 20-hour-long fight, inflicting between 400 and 500 casualties on the Germans. Eventually captured as POWs, their contribution to the Allies' victory was recognized in 1981 by President Carter.

For WWII history buffs, military history buffs, and people who enjoy stories about a group of people bonding with each other against adversity, this is a GREAT book. I highly recommend!!

More Proof of why they are called the Greatest Generation, so young so brave so tough and what miracles.

This story is slow getting started with so many characters and little story’s going one to another and so many to keep track of but once the war gets started it only gets better as it goes only much sadness for them all and all one can say was it was a miracle from God that many made it alive and I had no idea that the battle of the bulge had hero’s and as young as this and my heart goes out to them for what they did for their Country.

This book is really a look at a single small US military formation - how it was formed, who its members were, how they ended up in front of the strongest German attack on the Western Front, how their actions blunted the German advance long enough for the Allied military to move troops to blunt the attack and how life was in the POW camps they ended up in. As with all of Mr Kershaw's books on World War II it is well written, informative and interesting. It is also something I rarely see in books on World War II in that it shows what life was like for US soldiers who had been taken prisoner during the fighting.

I have read other books on The Battle of the Bulge but none that described what this single platoon faced, or how their efforts held up the German advance for a day, thus providing time for the Allied command to reposition soldiers to stop the effort to get to Antwerp, nor how the platoon was never given credit for its heroic effort until long after the war. Mr Kershaw says that this platoon is the most decorated in the US Army, and that is undoubtably true, but only in the book do you find out that those decorations only occurred long after the war, and only because of the publicity of their heroics forced the US to change the rules regarding awarding of medals.

While the entire book is interesting what I found fascinating was the description of what life was like for Allied POWs. Of all of the books I have read on the European Theater of World War II few have had anything to say about the life of soldiers in a German POW camp, and none describe it as well or as fully as this book.

A very good book, well narrated and well worth listening to.

Focuses on the men in the platoon

First of all, anything read by Grover Gardner is well worth listening to. I learned the basics of the Battle of the Bulge — from both sides, even that of Hitler and his staff — and got a vivid sense of what the battle was like, especially in its earliest days, for the GIs caught up in it. I just want to point out that the focus of this very admiring account is mainly on the heroic individuals in this specific platoon, from their training days in the U.S. to their various experiences after being captured — including horrendous suffering in German boxcars and prison camps, and even including, by way of epilogue, some account of their lives after the war: their careers, reunions, and struggle for proper recognition of the key part they'd played in holding up, for a crucial day or two, the German advance.

Very good story. Learned much about the battle of the bulge. For all WW2 enthusiasts I highly recommend it.

The first few chapters went slow and I feel it took way too long to build. I couldn’t get it off chapter five. Narration was excellent.

I purchased this book and enjoyed it enough to once again listen to it, but… apparently you don’t actually own it. Since pausing this audible membership credit I can no longer listen to it. Well audible that temporary pause is now going permanent. Eff you

The first hand account's of so many brave men is a must read. I also loved the fact that it includes persons on both sides of the fighting and about their lives after the war.

So much new information on this battle i had not known in this book. So glad i listened.