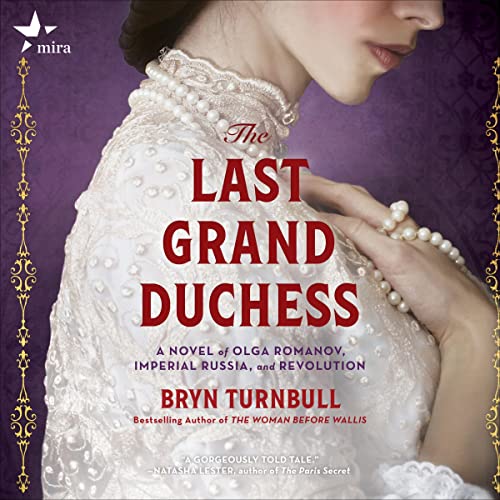 By: Bryn Turnbull
Narrated by: Mary Jane Wells
Try for £0.00

“Powerful and haunting...an intimate and unforgettable tale that transports the reader to the heart of Imperial Russia.” (Chanel Cleeton, New York Times best-selling author of The Most Beautiful Girl in Cuba)

This sweeping novel takes listeners behind palace walls to see the end of Imperial Russia through the eyes of Olga Nikolaevna Romanov, the first daughter of the last tsar.

Grand Duchess Olga Romanov comes of age amid a shifting tide for the great dynasties of Europe. But even as unrest simmers in the capital, Olga is content to live within the confines of the sheltered life her parents have built for her and her three sisters: hiding from the world on account of their mother’s ill health, their brother Alexei’s secret affliction, and rising controversy over Father Grigori Rasputin, the priest on whom the tsarina has come to rely. Olga’s only escape from the seclusion of Alexander Palace comes from the grand tea parties her aunt hosts amid the shadow court of Saint Petersburg - a world of opulent ballrooms, scandalous flirtation, and whispered conversation.

But as war approaches, the palaces of Russia are transformed. Olga and her sisters trade their gowns for nursing habits, assisting in surgeries and tending to the wounded bodies and minds of Russia’s military officers. As troubling rumors about her parents trickle in from the front, Olga dares to hope that a budding romance might survive whatever the future may hold. But when tensions run high and supplies run low, the controversy over Rasputin grows into fiery protest, and calls for revolution threaten to end 300 years of Romanov rule.

At turns glittering and harrowing, The Last Grand Duchess is a story about dynasty, duty, and love, but above all, it’s the story of a family who would choose devotion to each other over everything—including their lives.

Looking for more historical fiction from Bryn Turnbull? Don't miss The Woman Before Wallis. For fans of The Paris Wife and The Crown, this stunning novel tells the true story of the American divorcée who captured Prince Edward’s heart before he abdicated his throne for Wallis Simpson.

What listeners say about The Last Grand Duchess

Very good book. Enjoyed the historical references and the tale of Rasputin and his influence on the family.