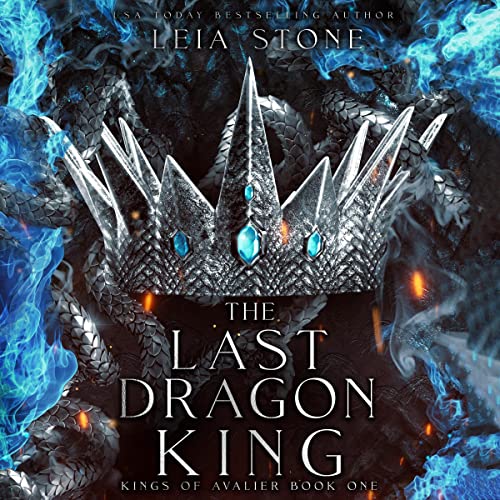 By: Leia Stone
Narrated by: Vanessa Moyen
Try for £0.00

The Dragon King is looking for a wife.

This news throws the women in my village into a tizzy. The king will be sending out the royal guard to bring women of childbearing age to his castle in Jade City.

There is only one requirement: The woman must carry enough magic to produce an heir for him.

I’m a watered-down human with a mere 10 percent dragon magic lineage, I know I won’t be chosen, but for some reason the magic sniffers command me to present myself to the king as a possible wife.

I’m ready to go to Jade City until my mother tells me a terrifying secret. A secret that could get me killed… by the king himself.

This is a full-length fantasy romance stand-alone with an HEA!

What listeners say about The Last Dragon King: Kings of Avalier

This had potential it it didnt reach.
First of the whole thing felt like it was rushed. The narrator spoke like she was in a hurry and the story matched that and not in a good way.

It had so much potential but fell short. It tries building a relation with the characters but its lacking because its so rushed.
It has an interesting storyline that could have used more attention.

Overall I'm disappointed and a little sad that so. Much potential was wasted..

Loved story line, would have liked more history content inside the story. Would like to read more of the wars

I listened to the audiobook and felt the narrator did a great job. I thought Arwen was a wonderful character, but some of her choices killed the book for me. Same for Dre. He was mostly cold through 80% of the book. He seems to put everyone before Arwen. I just didn’t feel the love at all. And their decision to try to have children by “other means” was heartbreaking. Not a terrible story…but the over all story just didn’t work for me. It had a lot of potential though.

Didn’t know what to expect

I’ve never read anything by this author so was hoping that it was worth the credit. I was pleasantly surprised. Since the heroine was a girl of 18 years of age I thought it might lean a little towards being a YA story. But the adventure and the romance kept me fully engaged and I can fully recommend it.

Already bought the 2nd one

I am in love. This book has been amazing. I highly recommend this to everyone.

Finished in one day - suuuuperb

The narrator was excellent and GOOD GOD the epilogue narrator 😮‍💨. I hope he sticks around for future books.

The story was really good. I was sucked in and didn’t want to finish. Has Acotar (in the beginning) vibes and the selection. If their intros had a baby - this would be it.

Only slight negative - I could have done without the ‘not like other girls’ energy but other than that I leeeeeerved it.

Wow. I really hope there are more books in the series! And I didn’t expect the ending. I’d like to have the book rewritten in Dra’s point of view. He must have had a lot of cold showers and forehead slaps!

I love books with these types of endings. I am hoping they all are like this. good love story, right amount of action and relaxation. started and finished it in one day!

I enjoyed the audible absolutely recommend!! And the The Last Dragon King 5 star read for me not spicy but has everything I’m looking for in a fantasy book. Dragon shifters is what for me to read this book found family, one bed , strong FMC I absolutely love the MMC
Draco :) Can’t wait to read the next book

I liked how this story had real sadness and real joy. It moved at a good pace and excellent problem resolution (at least in my opinion). The best books will take your emotions on a roller coaster and even though it’s a quick ride it’s a good one.

The plot is great, and there are parts where the pace of the story was just right, but there are some points that feel rushed. I think there is enough story that this could have been a longer book, and really given more of the relationship developments btw the two main characters. I feel like the entire “falling in love” part was glossed over and the HEA was squeezed into a single chapter. If you want a quick listen then this will be great, if you prefer longer stories with all the details, this book is not for you.

I loved listening to this amazing story. I was captivated from the very beginning.