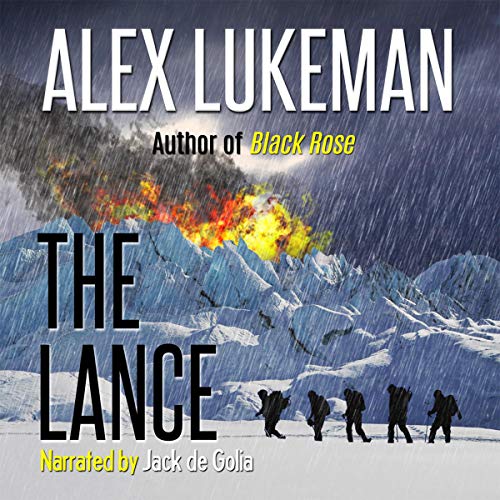 In the frozen wastes of Antarctica the Lance, an ancient weapon of unthinkable power - once lost and legendary - has been recovered. In the terrorized streets of Jerusalem, devastation is unleashed upon the eve of international peace. In the halls of power of Washington, D.C. a desperate plot set in motion during the final days of World War II has begun to unfold. Now Nick Carter and his team of deep black operatives from the PROJECT must race against time to stop events that will lead to the next World War. But to do that they must first stop those who already wield the Lance.

This non-stop thriller is Book Two in the PROJECT series.

What listeners say about The Lance

Following the first book, we have men who will stop at nothing to gain power, even a war, From the vast land of Antarctica a sword of power is found to Jerusalem the op group goes to stop them before it accelerates out of control. Action from the first page. Given audio for my voluntary review and my honest opinion

The Project series is excellent. Alex Lukeman has done an outstanding job of writing. The action is nonstop, characters are very well developed, and the storyline keeps your focus from stay to finish.

Would you consider the audio edition of The Lance to be better than the print version?

I think so as the narrator is great and gives the book a life I don't think I would have come up with on my own.

Oh yeah with all that action how could it not?

I like Nick a lot but warming up to Ronnie as well. I really like the way he brings there characters to life.

How a army of five defeated the Reich.

WooHoo! Excellent twisting of plausible history and plausible current events. Strong characters and characterization, fast moving plot line interspersed with secondary plot line of the bad guys. And plot twists. I hate spoilers in reviews, so there are none here. Be prepared to suspend disbelief and enjoy the ride!
Jack de Golia does a creditable performance of delineating each of the characters and conveying the tone of each situation.

First book I wish I could return.

A better story
A better narration
Something plausible in the plot

Would you ever listen to anything by Alex Lukeman again?

Can't think of any

I am a pretty easy hook for the Tom Clancy - Greg Isles - Brad Thor kind of book.
Alex Lukeman really has a long way to go to get in that league - doubt he can ever do it.

The Clancy corp books at least hang together - this is silly...

1. The Director of the Project is a woman - who we know nothing about - who seems way out of her league - is she an equal opportunity hire - what did she do to earn her job?

2. Early in the book the same Director loses her NSA clearance - BUT SHE HAS A DIRECT LINE TO POTUS - maybe she should pick up the phone and call him and get it reinstated.

3. We are expected to believe our hero can step right in to join POTUS's security team - REALLY?

4. We are expected to believe that two bombs that are small enough to fit in books can wipe out a mall and a city block worth of real estate. Find that very hard to believe. A gym bag maybe - a back pack - but less than a pound of something?

5. And then we are expected to believe a bomb can be planted below the site of POTUS's speech - I kinda think that we would have had that area gone over with a fine tooth comb by a security team in the real world.

Just wish I could have the 3 hours back - thank goodness I can crank up the speed on my iPhone to 2.5...

5th grade writing on serious topics. Not Tom Clancy. Very disappointed. Might be help with a stronger narration.

This series just gets better with each book. Can't wait to see what happens next.

So glad this novel restored my faith in action adventure. After reading a pretty lame, exposition-heavy novel, this book was a welcome change. I loved the concept, the characters were well developed and easy to keep track of; thanks in no small part to a good narration. DEF downloading his next book!

A good book!A lot of action!A must read.Excellent writing.Jack de Golia was a fine narrator. was given this free review copy audiobook at my request and have voluntarily left this review.'

The book has a very fast pace punctuated by fairly short chapters, which made the book seem to fly by. It certainly kept me on the edge of my seat.

This is the third Alex Lukeman "The Project" book I've read and I've thoroughly enjoyed them all. I've never seen so much action poured into one book, and the action starts on the first page and doesn't let up. From Tibet to Antarctica to Venezuela to Israel to Washington, D.C., the bodies and bullets pile up, along with rocket launchers, Nazi submarines, tranquilizer darts, cursed swords, and nuclear bombs. It could be way over the top but Lukeman handles it with skill and aplomb. And, when it does go over the top, that's just part of the fun.

The audio version is a special treat. The narrator, Jack de Golia, is excellent. There are many characters and accents to convey, and he does so in a way that helps you keep track of the different characters while entertaining you with his sense of theater. He seems to particularly revel in narrating the "super villain" characters, whom he delights in portraying as evil genius Bond-type masterminds. Great, great fun.